How to draw Feynman diagram of quark decaying to more than three quarks (weak), and tell if it's Cabibbo-allowed/supressed?

I have problems when it comes to drawing Feynman diagrams that involve weak decays creating more than two quarks. So I hope one of you can help me clarify. let's consider the following problem:

Will the following decays take place with a strong interaction, electromagnetic interaction, or weak interaction? Or is the reaction forbidden (weak reactions exchanging more than one $\mathrm{W}^{\pm}$ or $\mathrm{Z}^{0}$ is considered forbidden)? Draw a feynman diagram for the allowed decays, and in case of a weak decay, classify if it's Cabibbo-allowed or Cabibbo-supressed.
Consider the reaction: $$D_{s}^{+}(c \bar{s}) \rightarrow K^{+}(u \bar{s})+\pi^{+}(u \bar{d})+\pi^{-}(\bar{u} d) $$

My attempt at a solution:
I immediately see that there is charge, lepton number and baryon number conservation. So this suggests that the reaction could happen. However, we immediately see that the charm quantum number is not conserved. Therefore we can reject strong and EM interaction.
The last possibility is the weak interaction. We know the charm-quark decays into either the strange or down quark (plus any other quarks produced from the W,Z-bosons). So this was my attempt on a feynman diagram for the reaction: 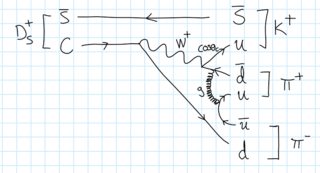 If this reaction is allowed it would be a Cabibbo-allowed from the production of the up and anti-down from the W-boson. I had to add a gluon to create a quark/antiquark pair in order to get the correct quark constituents. But is this even allowed? I already argued that this decay was not possible through a strong interaction.

After this, I looked up the solution. The Feynman diagram wasn't drawn, but the solution said it was a weak interaction, which was Cabibbo-supressed. Is there way I could tell this before drawing the diagram. And how could I draw it correctly then? Would this require multiple W-bosons, since we end up with 6 quarks instead of 4?.

Your diagram is OK. It is Cabibbo suppressed at the other W vertex which involves $c \to d$ not $c \to s$. It is not unique in that the gluon can come off any of the quarks/antiquarks but that doesn't matter at this level.

You could argue this without the explicit diagram: there is a change of flavour so it must be weak, but there is no $s$ quark in the final state to match the $c$ quark in the initial state, so it is Cabibbo-suppressed.

Not the answer you're looking for? Browse other questions tagged particle-physics standard-model feynman-diagrams quarks hadron-dynamics or ask your own question.

2
Why is this particle interaction forbidden?
1
Drawing the quark flow diagram for proton-pion interaction
2
Is the decay $\Sigma_0 \to n + \gamma$ allowed?
1
A question on the strong interaction and charm number
1
When is a decay mediated by the weak force
2
Pion+ and proton make kaon+ and another strange particle, X. Why is this the strong interaction?
0
Drawing Feynman diagrams including $\pi^0$-mesons
1
Should quarks be grouped together in Feynman diagrams?
0
Can interactions be both Cabibbo suppressed and allowed?