If we have a neutrino $\nu_e$ and an antineutrino $\bar{\nu_e}$, one would expect that a possible interaction would be that they would annihilate each other, producing possibly two photons. I do not believe that this has been observed, however it would certainly be expected based on other particle/antiparticle pairs which have been observed.

If we consider the time reversal of that interaction, we would have two photons interacting, producing a neutrino/antineutrino pair.

One would naively expect it to be possible fairly easily; the rest mass of a neutrino is unclear; it is speculated to be around $1$ eV (perhaps within an order of magnitude); this level of energy can be achieved with visible or near ultraviolet photons.

However, it obviously doesn't happen (or, at best, happens extremely rarely); if it did happen, one would observe photons 'disappearing' (as the generated neutrinos are effectively invisible), and we don't see that. And, if it did happen, observing when it did happen would allow us to get a much better estimate of the neutrino rest mass.

So, my question is: do we know of a reason why this doesn't happen?

I thought about such a process at one loop level, please correct me if this won't work for some reason. 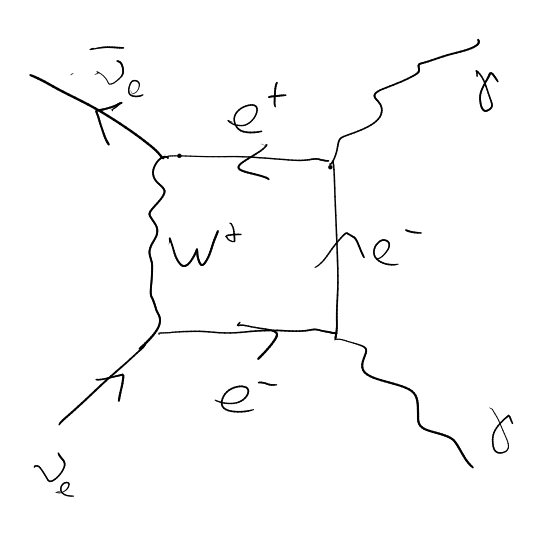 You know $Z\to \bar \nu \nu $ at tree level, routinely. However, by construction of the SM there is no $Z\gamma\gamma$ tree coupling: There are several answers on this site explaining why. (No trilinear couplings for the $W_3$, nor for the B, so not for their mixtures.)

The reason I mentioned an intermediary Higgs is since there is such a freakishly small $h\to \bar \nu \nu $ (presumably you recognize why: proportional to neutrino mass!), and an induced fermion loop coupling for $h\to \gamma\gamma $ exploited in its discovery. Presumably your can eyeball how truly, doubly freakishly, unlikely this is.

By the simple fact that photon fields don't interact with neutrino fields, they can't excite a neutrino pair. At tree level. At loop level, they could excite particle fields that do interact with it (W's, quarks, or electrons), but these kinds of interactions are highly suppressed (see comment by @CosmasZachos).

Not the answer you're looking for? Browse other questions tagged particle-physics conservation-laws standard-model neutrinos or ask your own question.

12
Neutrino annihilation and bosons
0
What are all the possible direct interactions between bosons in Standard Model?