Help decipher the notation said to denote a common pattern in various branches of science in Prelude to Mathematics by W. W. Sawyer

In Section 1.2 - Nature's Favorite Pattern? (excerpted below) of Prelude to Mathematics by W. W. Sawyer (1982), he said mathematicians used the notation $\nabla^2 V$ to denote a pattern that occurs "in at least a dozen different branches of science", without explaining the meaning of the symbols. In the footnote, he extended the notation to an equation $\nabla^2 V = 0$ and tried to provide some explanation. It seems to talk about the law that properties in physics manifest the same in empty space regardless of position and direction. But how does $\nabla^2 V = 0$ expresses this law? Could someone give an interpretation of the equation in a concrete context? I am exposed to basic physics in high school. 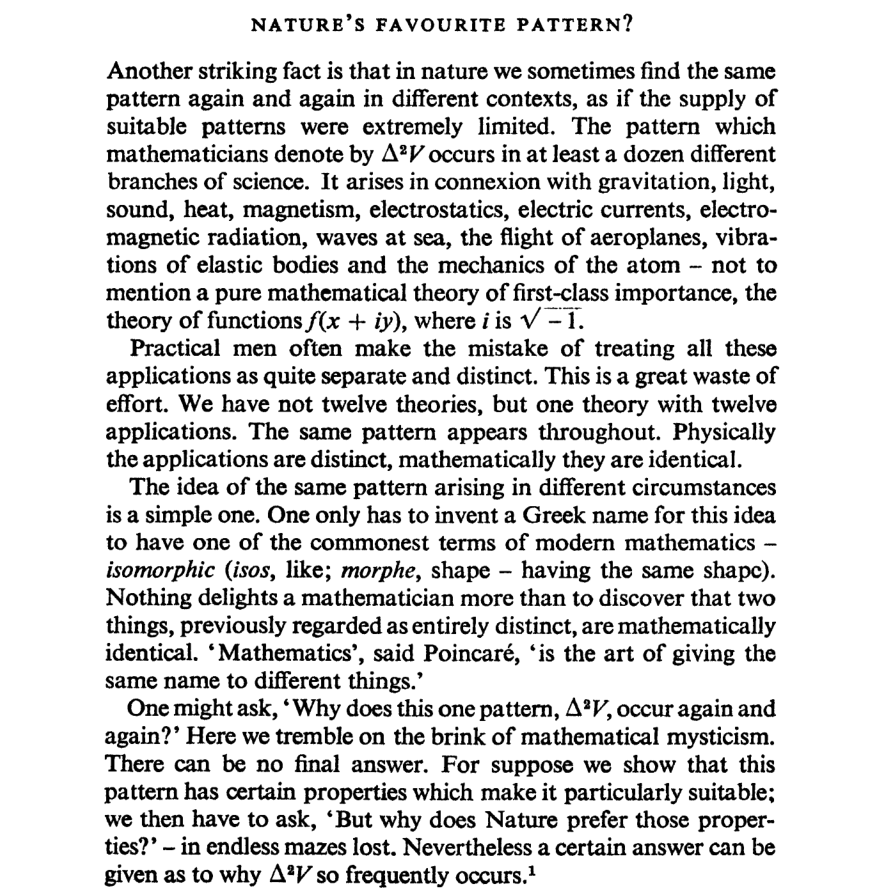 Here $\mathbf{E}$ is the electric field, which is vector valued, $\nabla\boldsymbol\cdot$ is the divergence operator, which essentially measures how much $\mathbf{E}$ "spreads out", $\rho$ is the charge density, which is scalar valued, and $\varepsilon_0$ is the vacuum electric permittivity constant.

What is this equation saying? Basically it says that

The more charge there is at some point in space, the more the electric field at that point will spread out. (Or in the case of negative charge, compress in) ​

Which makes intuitive sense. Now assuming $\mathbf{E}$ is conservative, which essentially means that it makes no difference what path you take between a start and end point in terms of how much work it will take, then we can find some scalar function $V$ such that $\nabla V=-\mathbf E$. (The function $V$ is related to the potential energy of the charge; the minus sign is a matter of convention.) Here $\nabla$ is the gradient operator, which basically tells you in which direction you need to travel to see the greatest increase in $V$. Substituting this into $(1)$ we get

Which is commonly written as

Once again, what is this equation saying? What is $\nabla^2$, physically? Well, the $\nabla^2$ operator, known in the business as the Laplace operator, essentially measures how much the value of a scalar field at a point varies from its average value over a small ball around that point. So, the stronger the electric charge density $\rho$, the more rapidly these averages will deviate. This also makes intuitive sense.

Notice what we have done here - we have translated 3 partial differential equations (one for each component of $\mathbf E$) into a single partial differential equation, only involving $V$. This is a very beautiful simplification. Although the new equation is now second order, instead of first order, it turns out in practice that equation $(2)$ is a lot easier to work with than $(1)$.

Why does the author emphasize this point so much?

Equation $(2)$ is an example of Poisson's equation, which mathematically speaking is a very interesting and beautiful equation. But let's go further than that - imagine that we are in a scenario where we have a point charge sitting at the origin. Since a point has no volume, the charge density is essentially infinite at the origin, but zero elsewhere. If we forget about the origin for a moment, that means that at all other points in space $(2)$ simplifies to

This is a hugely important equation! So important, in fact, that is has a special name, Laplace's equation. Why do I say this equation is so important? Well, I'll give you a list of all the places you will see this equation -

These are the ones I could think of off the top of my head (my physics background is really shining through here), but I'm sure there are more.

That's all I have today. I probably left out some interesting points but I think this answer will suffice so far. Please comment any questions.

Not the answer you're looking for? Browse other questions tagged electrostatics differentiation notation gauss-law calculus or ask your own question.