How does grounding work? 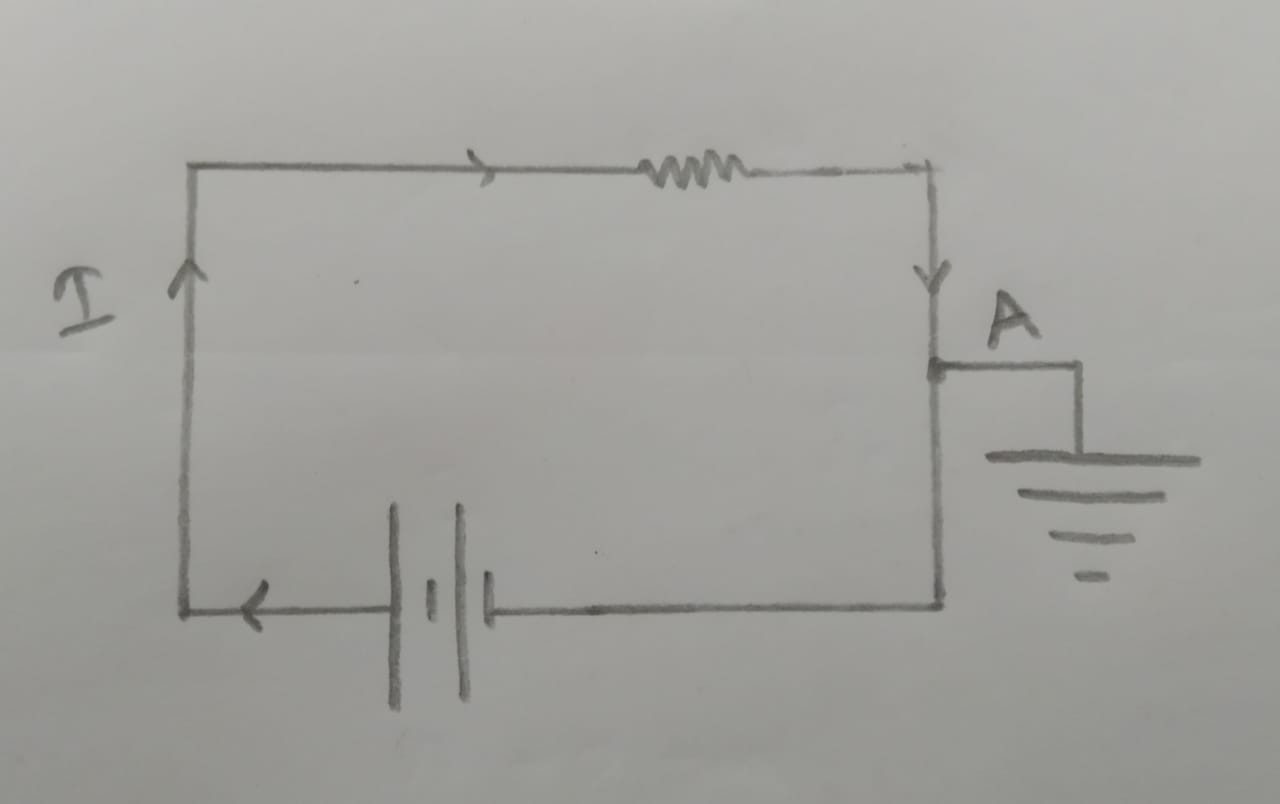 This is a simple circuit that has been grounded. My question is, after reaching point $A$ will the current $I$ reach the negative terminal of the battery or will it go to the earth?

Then you might ask, what the purpose of grounding is. The absolute level of voltage (the reference potential) is not well-determined if you do not ground the circuit. Only potential differences ("voltages") are defined. So anything that your circuit "catches" from the environment, would serve as the potential reference, because the whole circuit acts as a capacitor and an inductor relative to the environment. This is undesirable if different circuits are connected together (for example your computer and your stereo), because their different reference potentials will then cause additional currents, which might interfere with the function of the devices.

Another reason for grounding is safety. For voltages dangerous to humans (usually above ~50 Volts for AC), grounding ensures that a defective device does not expose its mains voltage to touchable parts. If you ground the housing of a device, any accidental internal contact between the housing and mains voltage will cause very high currents (ground is assumed to be low impedance), the fuses or circuit breakers to be triggered immediately, and consequentially, the current to be stopped long before you happen to touch the housing of the device and meet your maker prematurely.

Yet another application for grounding is that you only need a single wire to close circuits. In a car for example, a headlight only has one wire (per lamp), the circuit to the battery is closed via the car's chassis. However, this is not "grounding" in the literal sense, because the car's chassis is not properly connected to the earth (the tires have a high resistance). So this is more like a kind of logical grounding, which is also used internally in most electronic circuit boards: supplying the negative battery voltage by a bulk conductor to everywhere around the components.

Theoretically, none of the electricity will flow to ground because the current into the battery must equal the current out and there is no way that the circuit as a whole can gain or lose electrons other than through that single connection to ground. This is assuming our analysis of the circuit begins in a steady state with node A already at the same potential as ground: there is no reason for electrons to flow either way because the two nodes (ground and node A) are at the same potential to begin with, while the electrochemical reaction in the battery requires just as many electrons to enter the anode as are released onto the cathode.

But it is informative to take a brief excursion towards reality in order to illustrate a point. In reality, electrons will flow to ground in order to equalise the potential between ground and node A. Even assuming that node A starts with the same voltage as ground, imagine electrons being radiated onto the circuit from an external source. Without the connection to ground, the circuit as a whole would build up a negative static charge. It would continue to operate as normal, just with node A at -1000V and the anode of the battery at, say, -997V. With the ground connection in place, such a potential would immediately cause electrons to flow and equalise the potential back to 0V and 3V with respect to ground. Small scale "common mode" deviations from ground could even occur momentarily as a result of the internal dynamics of the battery: imagine turbulence in the electrolyte temporarily holding a bunch of negative ions away from the cathode, for example.

It is possible to model this concept within the familiar electrical engineering abstraction of ideal resistors, batteries etc.. Any static charge on the circuit can be thought of as existing across a capacitance to ground. The discharge of that static charge would theoretically take 0 time, but that can be changed by adding a resistance between node A and ground. 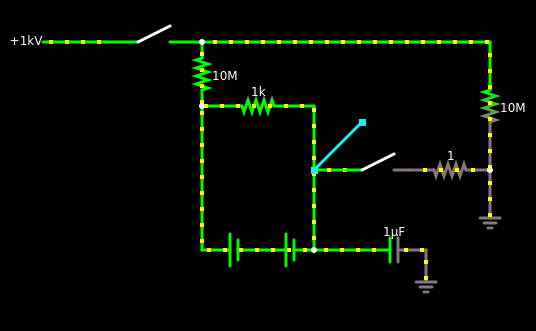 Above: with no grounding, the two nodes of the circuit acquire a 1000V and 997V potential with respect to ground. This can be removed again by discharging the capacitor.

With this amended model, the circuit can acquire an overall charge via the switch on the left hand side, which represents the extrinsic electron beam described earlier. At a later point, the circuit can then discharge to ground through the resistor on the right resulting in a flow of current. But for most engineering purposes, it is convenient to think of this happening continuously and instantly, with node A always at 0V with respect to ground and no current flowing in or out (no random imaginary CRT monitors spraying electrons onto our circuits and grounds alike; no unwanted resistance to ground either), so we set the capacitance to zero and the discharge resistance to zero.

When the circuit is first connected electrons will flow to or from ground if the average voltage of all the components happens to be different to the ground voltage.

Once that has happened the total charge in the circuit has no reason to change to any substantial degree, so the electrons will go around the circuit loop only.

Over time a small number of electrons might be gained or lost in the circuit by things that aren't shown - perhaps a person who became slightly statically charged touches a component, or small number fly off into the air every second. In that case more some electrons will flow to or from the ground to restore the balance of charges.

Not the answer you're looking for? Browse other questions tagged electric-circuits electrical-resistance voltage batteries or ask your own question.

0
How does an ammeter in a circuit work?
3
How does connecting batteries in series work?
3
How the current moves in the battery and outside the battery?
0
Circuit Analysis - Grounding and Current
2
Why can't we add the emf of two batteries in a parallel circuit?
0
Current through a battery
0
Grounding a simple circuit?
4
How does electrical energy in parallel work out?how does less energy travel through more resistance