In Irodov problem 109 under electrodynamics , we are asked to find the capacitance between a wire and an infinite conducting plate . 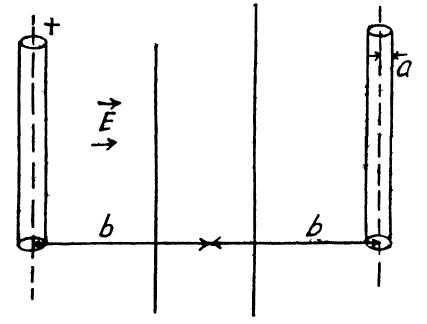 I looked hard for a high school level explanation on why this can be done, This post gives an explanation using boundary conditions which I don't understand.

Link to the problem if required.

The method of images allows us to solve a small set of very ideal problems that would otherwise be prohibitively difficult. The idea is that there's one unique field that "works" for a given situation. If we know enough things for sure about that situation, any field we find that fits those things has to be correct -- no matter how we came up with it.

In this situation: the infinite plate is a conductor, and therefore has a constant potential (which we can set to $0$); and if we zoom in very close to its surface, its electric field is that of an infinite charged plane (and is therefore perpendicular to its surface). These are called "boundary conditions," which are just things we know are true. (They're specifically used to pin down a single answer to a differential equation: if you've taken calculus, think about the $+C$ you get from an integral. It's like that, except slightly more general.)

Some context you definitely don't need at the high school level: because of something called Laplace's equation -- which needs to be integrated twice to yield a potential $V$ -- you'll need two boundary conditions for each conductor in a problem (very likely, this'll be only one conductor). Thankfully, you already have those two pieces of information: $V=0$ along the plate, and $E$ is perpendicular to it when you're very near its surface.

But if you take away the conductor and "mirror" an identical wire a distance $b$ away on its other side, their potentials cancel out along the (missing) plane's surface and their total electric field is perpendicular to that surface if you zoom in far enough. And because of the uniqueness theorem, it doesn't matter how we found this electric field: it fits our two pieces of information, so it's correct.

One last thing about the method of images: figuring out correct configurations is more of an art than a science. If you don't have that knack and you don't want to spend the time developing it, it's probably best to just memorize the correct configurations for a given kind of conductor. (But it'll always be the same mirroring idea for a conducting plane, and I doubt you'll see conducting spheres or cylinders in high school.)

When the system is in equilibrium, at the surface of the conducting plate, the field lines must be perpendicular to the plate.

If they weren't, then there would be a force on the charged particles in the plate and they would redistribute themselves until any component of field parallel to the plate was cancelled out.

The method of images provides a way where the pattern of the field lines is often easier to find and will be perpendicular to the plate, by symmetry.

3
Realistic vs Idealistic capacitance
0
Final charges on Capacitors connected in a curcuit
1
Why do we need wires to discharge a capacitor?
0
Why does potential decrease when a dielectric is introduced?
1
Capacitance for infinitely large plates
0
Why is it often assumed that parasitic (or “stray”) capacitance is in parallel?
1
Why significant change in permittivity can be observed for parallel plate capacitor? (multiple dielectric plates)