Confusion on the coefficient of restitution

I am struggling to grasp the usage of the coefficient of restitution $e$, to be more specific the conventions around $e$ taking negative values and its implications on oblique collisions.

As I have learnt, the coefficient of restitution $e$ is given by the following formula:

However some confusion arises over the different manner of ways this formula is expressed in different textbooks, some use

Furthermore another dilemma arises for me regarding using the coefficient of restitution for oblique collisions, say we have the following scenario where; 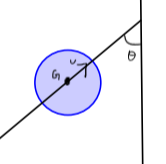 However from the diagram it is apparent that the x component of the velocity immediately after collision will be towards the left direction, or in other words negative; The problem arises here, if $e$ can not take negative values, and we know that $u_x$ is positive, then how can $v_x$ be negative?

Use the coefficient of restitution from your first formula to find the magnitude of the velocity of separation (for example), and deal with positive $e$. It won't tell you the direction.

Just use common sense about the real situation to decide the directions.

Here is an example.

A ball A of mass 6kg is moving at 10m/s and collides with a stationary ball B of mass 4kg. The coefficient of restitution for the collision is 0.5

What is the velocity of each ball afterwards?

From your first formula the velocity of separation is 5m/s.

From conservation of momentum

momentum before = momentum after

Not the answer you're looking for? Browse other questions tagged newtonian-mechanics energy collision or ask your own question.