I had this quite vague picture in my head 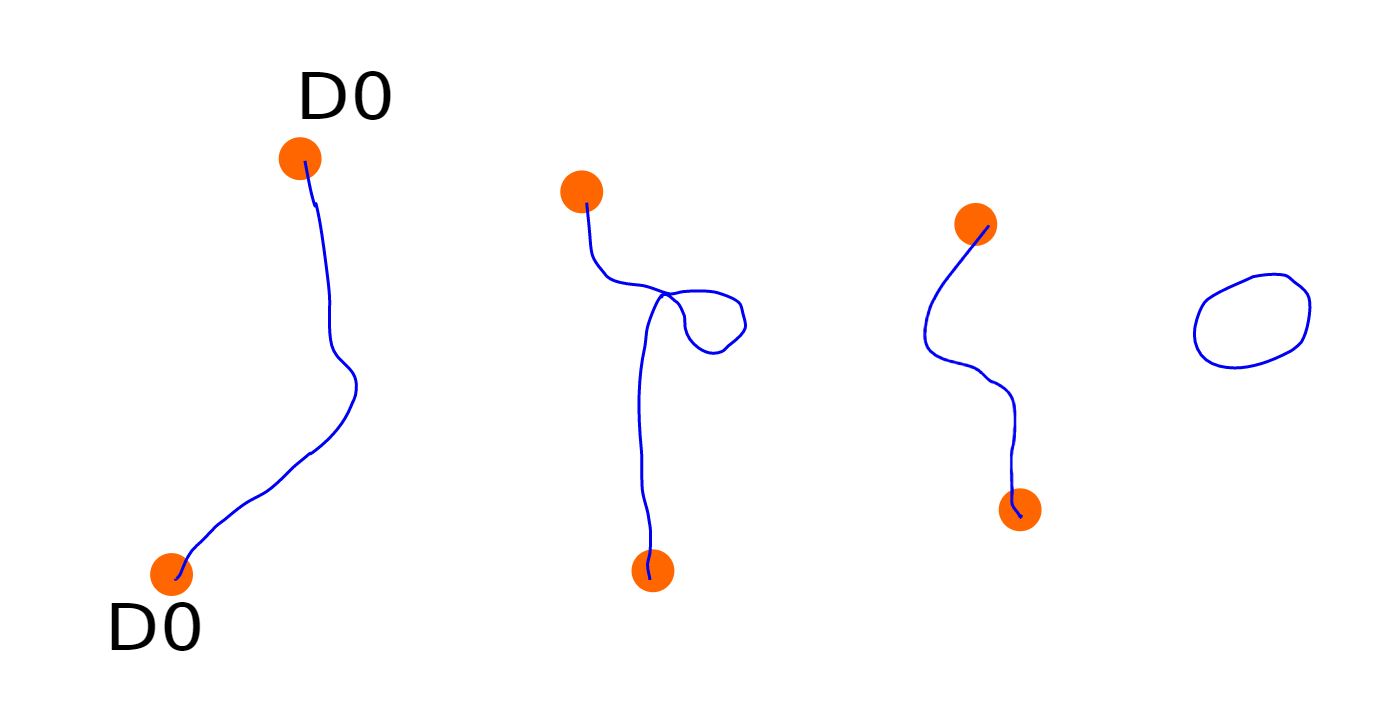 of how a bound state of two $D0$ branes and an open string might "radiate" a closed string when the open string forms a cusp. I know the idea is vague, but any comment or answer directing towards a concrete calculation, paper or textbook will be very much appreciated.

I was including this as a comment, but I decided to add a few more details so I'm presenting it here as an answer instead.

There are many ways of computing closed string emission from an open string stretched between two D0 branes.

Classically, a closed string is emitted from an open string if an open string self-intersects (with probability $p= 1$), at which point a kink (rather than a cusp) will form on each of the two decay products. (Check the cosmic string literature to see how such classical computations are carried out.)

Quantum-mechanically, assuming we are interested in the regime where the string coupling, $g_s\ll1$, the probability that a closed string (in any permissible state) is emitted from a specified initial open string state (allowing for the closed string to backreact on the final open string state) is (to leading order in string loops but to all orders in the string length) given by the imaginary part of the forward scattering two-point open string amplitude with Dirichlet boundary conditions (in all space directions) with Euler number $\chi(\Sigma)=2-2g-b=-1$. So this worldsheet has one closed string loop, $g=1$, and one boundary, $b=1$. You can think of it as a disc with a bulk handle insertion, with two vertex operators, $V,\overline{V}$, (one being the Euclidean adjoint of the other) on the disc boundary. Call the resulting 2-pt invariant amplitude (computed with the Lorentz invariant normalisation): $\mathcal{M}_2$, so that $i(2\pi)\delta(E-E)\mathcal{M}_2=\int {\rm d}m \,\langle \overline{V}V\rangle $, where $\int {\rm d}m$ is the integral over moduli and $\langle \dots\rangle$ is the worldsheet path integral in the string background of interest. Then the usual QFT formula can be applied (which follows from unitarity) to extract the decay rate; including the appropriate kinematic factors (so that the full forward scattering dimensionless S-matrix element reads $S=1+i(2\pi)\delta(E-E)\frac{1}{2M}\mathcal{M}_2$ in the rest frame of the open string of mass $M$) yields the decay rate of interest is: $$ \Gamma= \frac{1}{M}{\rm Im}\,\mathcal{M}_2. $$

String amplitudes with negative Euler number can be hard, but one is calculating the imaginary part so that makes it only a little simpler.

A slightly easier calculation that might suffice for the question of interest might be `what is the probability that a certain closed string state is emitted (such as a graviton) from a specified open string stretched between two D0 branes?' (Still taking backreaction into account.) This can be extracted from the imaginary part of a four-point forward scattering $u$-channel disc amplitude: $$ \textrm{open string}+u\textrm{-channel graviton} \rightarrow \textrm{open string}+u\textrm{-channel graviton} $$ where the gravitons are inserted in the bulk of the disc and the open strings on the boundary.

It can also be extracted from the $\chi=-1$ calculation (above) by dropping all terms in the sum over closed string states except for the massless multiplet (but then the calculation would implicitly be associated to all massless states as opposed to only a graviton emitted).

Not the answer you're looking for? Browse other questions tagged string-theory branes or ask your own question.