Unlike electrons, photons don't have a magnetic moment despite having a spin. Why?

DISCARD THE FIRST TWO PARAGRAPHS AND DIRECTLY READ THE LAST ONE.

Electrons are charged particles and have a magnetic moment proportional to their spin. So they can respond to electric and magnetic fields. In particular, they can be accelerated, deflected by magnetic fields.

For composite particles, the situation is more complex because the magnetic moment arises due to the elementary particles which make them up, so there's not such simple rule to follow. Some neutral baryons (e.g. the neutron, $s=1/2$) have a magnetic moment, while others (e.g. the "excited neutron" $\Delta^0, s=3/2$) do not.

But I have read that the neutrino may have a nonzero magnetic moment despite having zero charge. How does this fit into your answer?

The magnetic dipole moment of a particle is a measure of its interaction with an external magnetic field. At the coarsest level, it arises from the direct coupling between the particle and the electromagnetic field, and is proportional to its charge and spin; this interaction occurs at tree level in QFT, and is the quantity to which I referred in my original answer.

Beyond tree level, things become more complex. Diagrams which include photon loops contribute small corrections, giving rise to the so-called anomalous magnetic moments of particles. All of these corrections involve higher powers of the coupling between the particle and the electromagnetic field, and so neutral particles still don't acquire a magnetic moment from them.

However, we must not forget weak interactions. We can consider processes in which particles interact with charged leptons $(\ell)$ and $W^{\pm}$ bosons, which in turn interact electromagnetically. An example of such a process for a neutrino is diagrammed below: 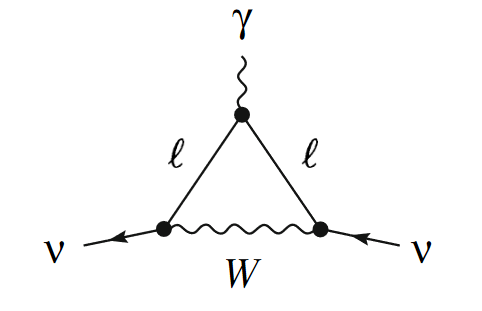 These processes are highly suppressed compared to their more direct electromagnetic counterparts because of the relative weakness of the weak couplings (hence the name), but they still exist in principle, and for neutral particles they are the only way to interact electromagnetically, and therefore the only source of a (very, very, very small) magnetic moment.

The standard model can be minimally extended to include small (Dirac) masses, at which point the above-mentioned anomalous magnetic moment due to weak interactions becomes non-zero. But it can also be extended in different ways, and the magnitudes of the resulting predictions for the neutrino magnetic moment (including whether it vanishes or not) depend on which extension you choose.

At this point I'm rather out of my depth, being nowhere near a particle physicist, so a more detailed discussion of the neutrino mass and the various extensions to the standard model are best reserved for a different author and a different question.

Spin had to be assigned to keep consistent with the law of conservation of angular momentum, irrespective of the charges. The specific assignment of spin is validated by the fit that the theory has to the data.

From the expression for the torque on a current loop, the characteristics of the current loop are summarized in its magnetic moment 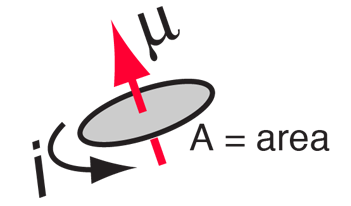 The magnetic moment can be considered to be a vector quantity with direction perpendicular to the current loop in the right-hand-rule direction. The torque is given by

Now a current loop is composed of moving charges. A neutrino and a photon do not have moving charges as point particles in the standard model The neutron is composite with charged quarks inside so it can and does have charged loops.

Photons have no charge, i.e. are electrically neutral, and are elementary particles, so they have no charged constituents that could interact to produce a magnetic field at a finer scale. As a result, their motion - whether translational or rotational - does not produce any magnetic fields at all.

Not the answer you're looking for? Browse other questions tagged photons quantum-spin quantum-electrodynamics magnetic-moment or ask your own question.

21
No magnetic dipole moment for photon