Speed due to gravity [duplicate]

Assuming a miraculous arrangement of a string of black holes for slingshot purpose, and a solid ball slinging by these black holes one after the other, gaining speed with each slingshot, is it possible in theory, that the ball reaches/exceeds the speed of light at some point? If not, then assuming the string of black holes extends for ever, at what point will the ball stop accelerating and why?

I got couple of answers that basically limit the speed to c. If that is the case, then it is obvious that the acceleration has to be less and less with each sling.

What is the reason for that reduction in acceleration? Is it because ball itself will turn into a black hole and it will start imparting as much energy to other black holes as it gains from them? Or because, there is some other relativistic mechanism involved here? Like, it will start emitting GWs to protect c.

The question was closed sighting another question. That is not the right question for this purpose. Because the other question is about light. Light can gain energy without gaining speed, just by gaining frequency. So, it does not need to gain speed.

Since, the ball keeps experiencing gravitational force, The ball will never stop accelerating. But as its velocity increases, the magnitude of acceleration will keep getting smaller and smaller .

No, it is not possible in theory. The short reasoning is: we model the motion of a test particle under gravity via timelike geodesic motion in general relativity, "faster than the speed of light" means a spacelike tangent vector, and geodesics preserve their timelike vs. spacelike vs. lightlike nature.

A more physical argument uses conservation of energy in the rest frame of each black hole individually. For simplicity of the argument, I'll assume the black holes are very far apart, so we can consider them separately and meaningfully discuss the speed of the test mass in a special-relativistic manner between the slingshots. The way a slingshot maneuver works is that the test mass' initial and final speeds are the same in the rest frame of the black hole due to conservation of energy (this holds exactly in GR if one models the black hole as Schwarzschild or Kerr in its rest frame), but its velocity gets redirected. If this velocity is redirected in such a way that it's more aligned with the motion of the black hole in your lab frame, then in the lab frame its speed has increased. See the still taken from a gif of an example scenario on the gravity assist Wikipedia article below: 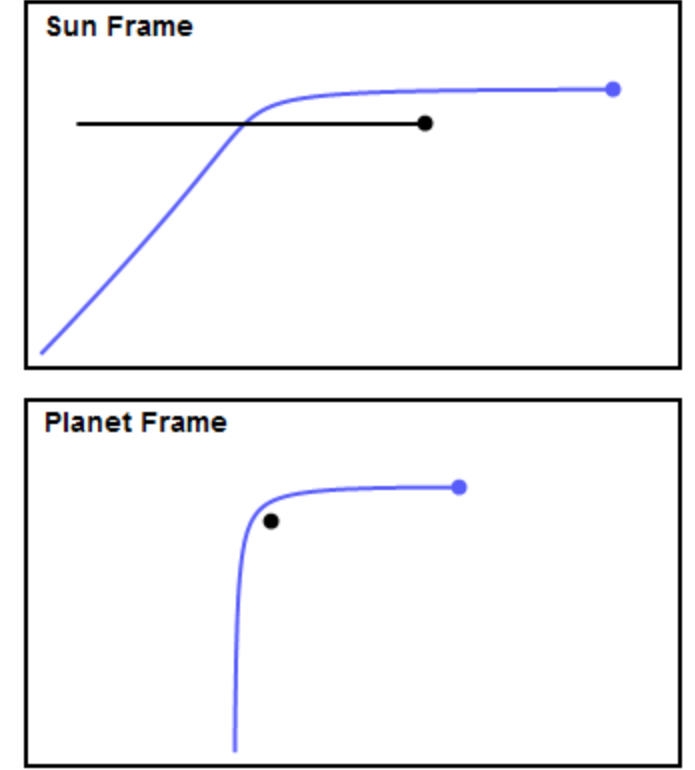 As a demonstration: in the example above, if the speed $v$ were relativistic, the initial and final speeds $u_i,\, u_f$ of the test mass in the lab from would be (using units with $c=1$)

Notice $u_f < 1$. The test mass need not ever stop accelerating, as it can always change its direction, but it will eventually be unable to meaningfully gain speed due to the above constraint of the addition formula.

You would just create a series of accellerations, getting smaller and smaller so you would gain a series that converges in it´s velocity to lightspeed for a series of infinitely many black holes you use as slings. The object you shoot would gain mass according to E = mc^2 with each acceleration so that your projectile would run according to the earlier mentioned converging series.

Firstly, the ball will never transform in a black hole. It gets accelerated by the black holes but a mass that's not a black hole initially can never turn into a black hole by accelerating it. Only when it passes the event horizon of one of the black holes you have in mind will it become a part of a black hole, thereby increasing the size of the black hole it has fallen into.
Depending on the configuration of holes you have in mind, and the initial position and velocity of the ball, the ball will escape the row after having interacted with it, the ball will continue its travel in a stationary way, zig-zagging around the holes (though eventually, due to the emission of gravitational waves, it will enter a black hole), or it will fall in a hole somewhere in the row.
When the ball acquires linear momentum, it will introduce linear frame-dragging (no Schwarzschild radius will ever form, because the mass-momentum tensor involves only restmass, the momentum part will introduce frame-dragging). so the black holes can gain momentum in the direction of the velocity of the ball, leaving them in motion. This will eventually stop the ball, if it zig-zags. On top of GWs.

To answer your question, the ball will only reach the speed of light if it enters a hole and if it started its travel at an infinite distance from the holes. If not, the velocity will be less than the speed of light at the exit of the row, but higher than the initial velocity. A problem might be that in the neighborhood of the hole time is slowed down. Your ball seems to slow down close to the Schwarzschild radius of a hole. so depending on how close your ball gets, you might have to wait a considerable time for your ball to be slung out with high speed.

(Don't mind the v^2 thing to the right, it's not important, I just copied it from wikipedia)

21
Gravitational slingshot of light using a black hole/massive object
76
If a mass moves close to the speed of light, does it turn into a black hole?
9
Will free-fall object into black hole exceed speed of light $c$ before hitting black hole surface?
6
Is it possible to have faster-than-light movement in General Relativity?

17
If two ultra-relativistic billiard balls just miss, will they still form a black hole?
4
Can gravity accelerate an object past the speed of light?
0
What would prevent two black holes from hitting speed of light in the flowing scenario?
6
Speed of gravity effect on a circle of stars