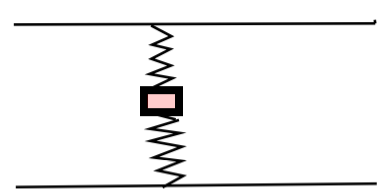 Hence my diagram is as shown 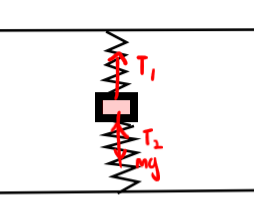 However the textbook I am using instead shows the forces exerted by the springs acting in opposite directions, 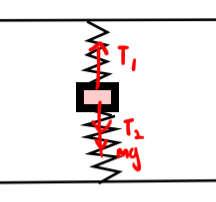 I do not understand, why would the lower spring exert a tension force instead of a thrust force?

newtonian-mechanics free-body-diagram spring
Share
Improve this question
edited May 30 at 2:13

Not the answer you're looking for? Browse other questions tagged newtonian-mechanics free-body-diagram spring or ask your own question.

2
Why do joined massless springs, act like a rope under tension?
1
Hooke's Law simple question
0
Two masses attached to a fixed vertical spring
0
How to set up equations of forces for 3 springs connected to each other in an elevator?
1
Compressing a spring
7
Do two springs compressed springs placed against each other obey Newton's third law?
0
Elasticity Mechanics Problem
0
Surprising implications of Newton's 3rd law when applied to a spring falling downwards with a weight