Wormholes are often "explained" by a visualization like this where spacetime is reduced to two spatial dimensions: 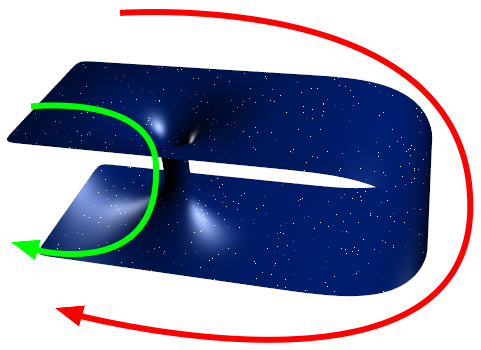 The problem with this visualization

Now I have for a rather long time been bothered by how this implies that a forth spatial dimension exists – since the universe (or space(time)) is curved in 3D space in this 2D representation (spacetime is 2D here), this seems to imply to me that if we were to "add back" the omitted third spatial dimension, the curvature for the wormhole to exist would need to be in a forth spatial dimension (without accounting for time, for now). Or in general, for $n$-dimensional spacetime, we need $n+1$ dimensions for the wormhole to work. At least, this is what these visuals suggest.

The problem is that in general relativity, one does in most cases not assume spacetime to be embedded in some higher dimension (see for example my previous question Why does GTR not need a higher dimension to describe the bending of spacetime?); instead, the curvature that explains gravity is intrinsic. Wormholes seem to be no exception: Are wormholes evidence for traversal of a higher dimension?

Some other visualizations of space(time) curvature

For "normal" masses curving spacetime, there exist some other illustrations like this: 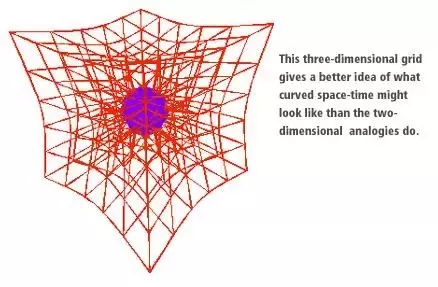 which are, I think, a bit better – the curvature of time is still neglected, but at least, the illustrations get rid of the "extra" space dimension which is not thought to exist.

I even found this video which claims to include the curvature of time in addition to the 3D-space-curvature above:

(from the video linked above, click here for higher-quality GIF)

I am not sure whether it is conceptually right, but this is not my question – let's focus on the curvature of space to explain wormholes.

How can wormholes be described or rather be visualized without embedding spacetime in some higher dimension? As I already said, all visualizations of wormholes that I have seen so far need an extra spatial dimension.

Is there any kind of visual representation for wormholes similar to the second image which shows the curvature as a distortion of the grid? The only idea I had was some sort of "tube" between two points where the gridlines are spaced differently, but this would mean that something "outside" this tube could in some sense "collide" with it. This does not seem to make sense. So specifically, how does one get from one place to another without actually doing so (i.e. traversing a smaller distance)?

My attempt at visualizing my idea: 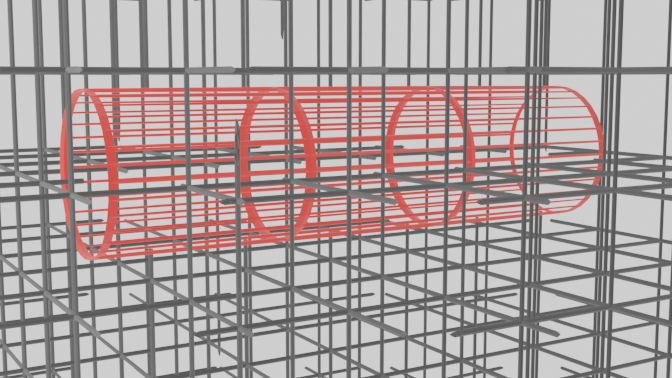 I know that to fully understand the curvature of spacetime or GR, one should study it mathematically, though at the moment, I have, being a high school student, not the required prerequisites. While I know that visualizations are in such cases not to be taken literally, in my opinion they can provide some good conceptual intuition, as far as this is possible.

(How) can wormholes be visualized without embedding spacetime in a higher dimension?

(I do not necessarily require the visualization to have 3 spatial dimensions – 2 would be fine too. Also, I am for now more interested in the curvature of space, so time could be omitted too, which should also make it easier to visualize a wormhole)

This may not have the detail you require, but in Sean Carroll's book From Eternity to Here, he uses the following analogy:

"In fact, there is a much more intuitive way of representing a wormhole. Just imagine ordinary three-dimensional space, and "cut out" two spherical regions of equal size. Then identify the surface of one sphere with the other. That is, proclaim that anything that enters one sphere immediately emerges out of the opposite side of the other....each sphere is one of the mouths of a wormhole. This is a wormhole of precisely zero length; if you enter one sphere, you instantly emerge out of the other (The word instantly in that sentence should set off alarm bels - instantly to whom?)"

(The passage is fresh in my mind, as I just read it yesterday)

Wormholes are weird beasts. There are a lot of different kinds of them, and being hypothetical and full of potential problems it's not easy to understand and visualize them. Anyhow, here's my two cents, based on the pictures and the conditions you posed: 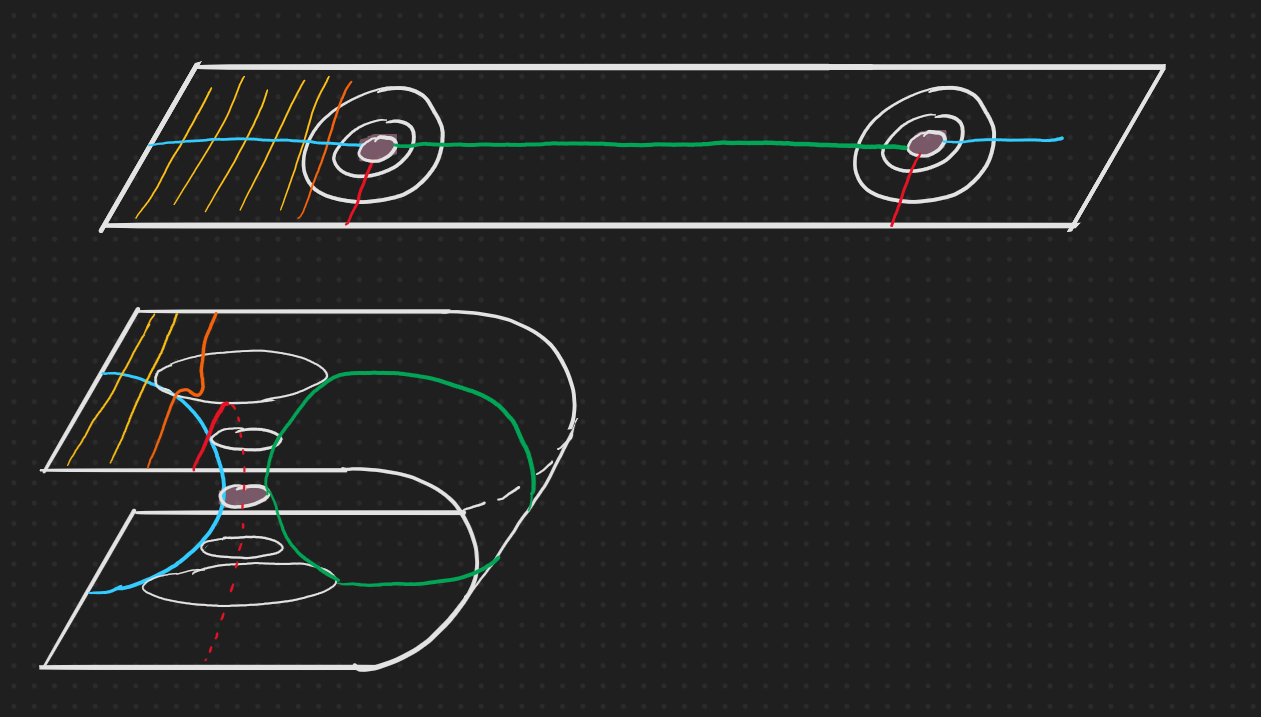 As Marc pointed out, using Carrol's words, you need to identify something in your spacetime to make a wormhole like the one in the first picture of your post: it's a weird concept to grasp without the proper mathematics, but the basic idea is that identified points on the two (sub)manifolds are the same point. In this picture, you need to identify the innermost circumference of the wormhole. Please note that you need to identify the circumference, not the circle: the (pink) circle is not in our spacetime (just like the inner "volume" of the hourglass shape in the embedding diagram is not in our spacetime). I added some colored paths to show how they would look in the embedded and non-embedded versions:

Your attempt is interesting (and it was my first idea too) but I think it misses the main point of a wormhole, going from a location to another one without traveling in the space(time) between them (between in the standard, not-wormholy, sense).

If there are two connected black holes (the connection being made with the help of exotic matter) that form a wormhole, you can make the connection between them visible by showing in your picture the Schwarzschild radii of both holes (like the red circles). For a wormhole, these radii are the same at both mouths. This being the same shows the connectedness of the holes, so this will show you that there is a wormhole. so instead of drawing a tube between them, two equal radii will suffice.
So in your picture with the red connected circles you don't need to connect them. Two equal radii circles will suffice. On top of that you can give them the same color to indicate that they have the same radii.

Not the answer you're looking for? Browse other questions tagged general-relativity spacetime wormholes visualization or ask your own question.