Why does the light of this infrared laser become visible after reflection?

We use a 780 nm laser in our lab, and that makes it in the near infrared (IR) range. The majority of people can not see this wavelength of light. However, when the beam reflects off of an object (see image), the light becomes visible. This image has been taken with an iPhone camera which has a poor (or non existent) IR filter, though the light is visible with the eye. 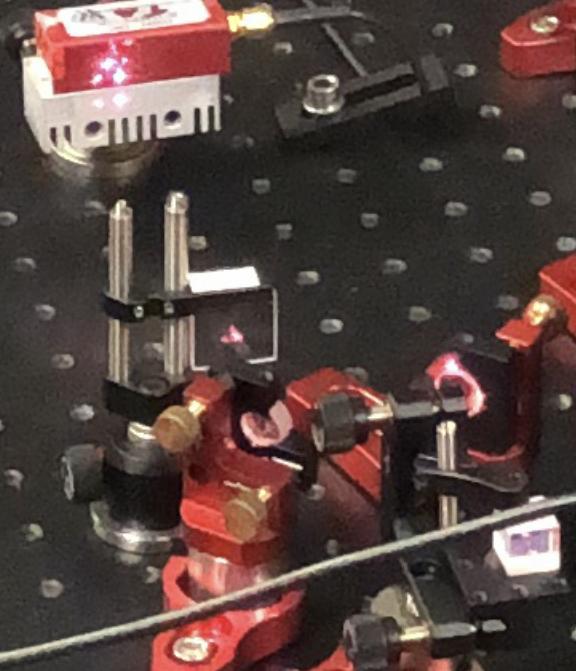 You can never see any light beam from the side. You only see light (of whatever wavelength) propagating directly into your eye. When laser beams sometimes appear as a visible line through the air, what is happening is that dust (and to some extent molecules too) in the air are scattering the light, sending some of it towards your eye. When the beam hits a solid object, then unless the surface is extremely flat (such as a precise and clean mirror) there will be scattering at all angles, so some will go towards your eye. It is this light which you are seeing.

In the case of infra-red radiation, the human eye sensitivity does not drop off immediately for wavelengths above 700 nm; it is low but non-zero, and the scattered radiation from a laser beam is often bright enough to be seen (obviously it depends on the intensity of the original beam). I have in this way seen 852 nm, for example. However, when you can see a wavelength such as this, you should take care: the radiation entering your eye is brighter than you may think, because your eye's sensitivity is low but you are seeing it. Eye protection is for this reason especially important with wavelengths outside the normal visible range.

I am sure that no conversion of photon energy is happening here.

Especially you need an up-conversion in energy which is very unlikely. Normal flourescence cannot be the cause here. There are detector cards for up-conversion of laser light, but they need to be "charged" by sunlight before they can be used . And this is very special material.

More likely the laser is relatively strong and the sensitivity of the eye is still sufficiently high.

For example: While I was working with 762 nm laser (Oxygen A-band) I, and all my colleagues, were able to clearly see the beam (even though 762 nm is already classified as IR). The laser had a power of ~ 300 µW and the collimated beam was clearly visible on a sheet of white paper at daylight conditions. When spread over 1 cm area the beam was very visible with light of.

Even though 780 nm is certainly further in the IR than 760 nm, your laser might be more powerful and the eye is still able to see the beam.

But the beam will probably be much more powerful than the perceived brightness suggests.

You see the light because its frequency, or wavelength for that matter, is visible for your eye, not because it somehow, magically, increases its energy.

That the ray hits objects, reflects or scatters and is coming to your eye creates an impression of light. It also proves that the frequency used is (still) visible for the human eye although probably less than the "regular, visible" spectrum.

The other answers are perfectly correct, assuming specular (mirror like) reflection, that is, elastic scattering (leaving the energy level of photons almost unchanged).

But there is another case which I would like you to consider, that is diffuse reflection, and absorption re-emission.

Diffuse reflection is the reflection of light or other waves or particles from a surface such that a ray incident on the surface is scattered at many angles rather than at just one angle as in the case of specular reflection. But the above scheme continues to be valid in the case that the material is absorbent. In this case, diffused rays will lose some wavelengths during their walk in the material, and will emerge colored.

Now the most important thing about your case, is that the surface on the picture is not only causing specular reflection, but diffuse too. This means, that:

The question is an interesting one, and the only way to test this is to do this with different objects. If the laser itself is invisible to the naked eye (is truly IR and not in the visible range), but if you shine the laser on the wall or other objects, the dot might become visible, because of diffuse reflection and absorption re-emission, where some photons are re-emitted in the visible range (you can even do fluorescence).

Not the answer you're looking for? Browse other questions tagged visible-light energy-conservation reflection laser infrared-radiation or ask your own question.

8
Does light lose energy when it reflects from a surface?

8
Why does glass absorb infrared light?
0
Can infrared lasers still do damage to things if they are powerful enough?
3
How does light behave after experiencing fully destructive interference, as in an interferometer?
149
Why does a mirror split my laser beam?
3
Why is the infrared glow that everyday objects emit not visible in a regular camera?
1
Will visual light interfere with infrared light from laser?
0
Are our eyes able to intercept the reflected lased visible photons(not the beam)if the degree of incident isn't 90°(or close)to the projected surface?
0
Why must interplanetary visible-light-wavelength laser communication beams be transmitted at very low power levels?