How does space change as the universe expands?

Consider a metre ruler. Despite the universe – and space itself – constantly expanding, the ruler maintains its size. If this ruler was alone in empty-ish space, other distant objects would appear to recede from it.

What does the universe's expansion mean for measurement and speed in space? More specifically, 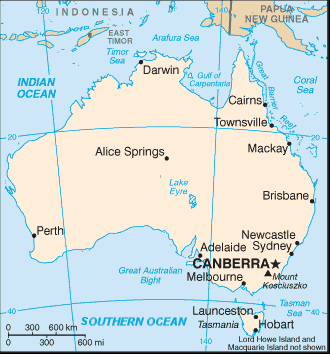 If two people at the same latitude but different longitudes in Australia both walk due north, they will get further apart. This is not because Australia expands as you go north, but because their paths aren't parallel. They are literally walking away from each other. The same is true in spacetime.

On the other hand, if you move an east-west pointing ruler north, its length in longitudinal degrees changes, but its length in meters doesn't. Physically, all you've done is move an object of constant length from one place to another. Polar coordinates are great for some purposes, but if you're only interested in the local properties of rulers, they're outright counterproductive: they make "effects" appear to exist that actually don't.

Unfortunately there are no light cones in this otherwise accurate analogy. But the local geometry of spacetime is everywhere the same, like the Earth is locally flat if you look at a small enough piece of it, and the geometry being the same everywhere means in particular that you'll always measure the same speed of light.

37
Can the Hubble constant be measured locally?

2
How do we observe the expansion of the universe?
2
If the universe stopped expanding, would there be an infinite amount of reachable negentropy?
3
What is a layman explanation for why the wavelength of light increases when space itself expands?