Why is voltage same for the two resistors connected parallel in circuit?

We know that the electric field inside resistor produced by battery is the actual thing that pushes the electrons in it to move and thus producing some current. We also know that strength of electric field can be described by the electric flux which is the total amount of fields passing through an area. That flux when combined(multiplied) with charge of electron gives the amount of force on it. Now comes our two resistors R1 and R2. Assuming a number of field lines coming out of a terminal going towards another terminal through these resistors, the field lines should get divided into the resistances R1 and R2. Therefore giving a reduced flux through each resistor than in a series. Which will then give a lower voltage for both resistors.

Wasn't the electric fields strength divided across resistors in parallel?

What is the main cause of voltage? How electrons get a force to produce current even when the wire is very long in? I think it is better to understand with reality than analogy. Please don't give misleading pictures

Why is voltage same for the two resistors connected parallel in circuit?

If there are no time-varying magnetic fields involved, voltage difference between two points is path independent. It is like altitude on a mountain. Suppose you are on top of a mountain, and there are different paths from the top to your car in a parking lot. The distance you travel will be different depending on your path. But the total change in your altitude will be the same regardless of which path you take. [There is a mathematical formalism to explain this. If you are interested you can research "conservative fields". One of the basic laws of electromagnetism states that when there are no time-varying magnetic fields, the electric field is conservative.]

Voltage in a circuit is defined in terms of energy per charge (J/C). So for simplicity, imagine the simplest parallel circuit with one battery and two branches with a resistor each. Now imagine electrons flowing around this circuit. The battery gives each electron the same amount of energy. So when the electrons leave the battery and reach the first fork in the road, some electrons go down one path, while the rest go the second route. But each electron still has the same amount of energy attributed to it. So the energy per charge in each branch is the same as it was at the battery. But that’s what voltage is, and so voltage must get copied into each branch at a junction. 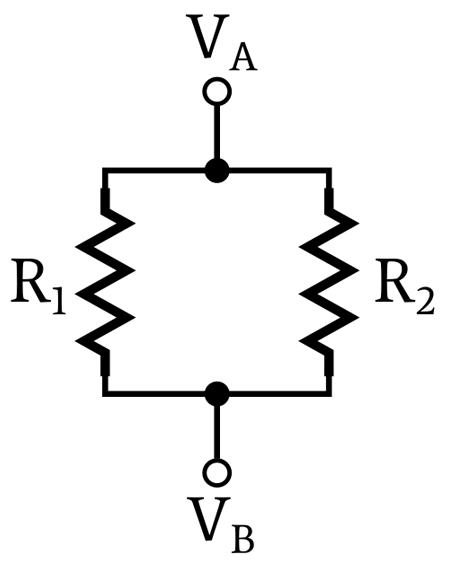 The image is from the website https://www.allaboutcircuits.com/technical-articles/resistors-in-parallel-understanding-current-and-voltage-in-parallel-networks/. This image shows two resistors connected in parallel. There are a few things to note about this circuit configuration:

This question is more frequent than imagined. It is assumed that resistors or electronic components connected to the same two nodes have the same potential difference. It may seem obvious. But why does this happen? Let's prove the obvious! :)

The question then changes to: why connecting components (for example R1, R2 and R3) to two nodes A and B through a perfect and ideal conductor means bringing the potential of point A and point B to these components?

These doubts are due to the way in which certain quantities are explained (the electrons that "have" a potential energy) compared to the fact that we lose focus on what these quantities are.

If the potentials were perhaps different, for example in the electrons "outgoing" from the resistors, we would each have them with a certain "electric potential energy" still to be "spent" and in a different quantity for each branch converging towards B in which they are found. We also know that on the conductors carried by current there are surface charges that generate the electric field useful inside them to push the electrons against the resistivity: in perfect conductors this resistivity is zero so the electric field will not be generated; in fact, the surface charges will naturally arrange themselves so as not to have an electric field (and potential difference) along the path. However, this also means allowing the surface charges placed on the three branches to arrange themselves so as not to have a net electric field in any part of the (perfect) conductor: the currents will pass but there will be no energy expenditure and the potential (energy to be spent) will thus be the same for all the electrons contained in each of the branches. Therefore, connecting the components in parallel to two nodes A and B does not mean "bringing" the potential of A and B to the components, but "making the potential of A and B equal" for all components thus connected.

In addition to the microscopic form of Ohm's Law it may be useful to examine the matter with Kirchhoff's laws, especially the law of voltages based on the principle of conservation of energy within a closed path.

A circuit is a system, it adjusts itself.

0
Why is voltage equal across the resistors connected in parallel?
23
How do electrons "know" to share their voltage between two resistors?
0
Voltage in a parallel circuit

23
How do electrons "know" to share their voltage between two resistors?
1
Why does a battery die more quickly when more resistors are added to the circuit?
2
Why current in series circuit is the same?
0
Relationship between Electric Fields, Potential Difference and Resistance in Circuits
19
Why doesn't the voltage increase when batteries are connected in parallel?
0
Why is voltage drop same in parallel?