I'm a student studying classical mechanics and ran into some trouble with the topic of rigid body rotation. The formula τ=Iα for rigid bodies, where τ is the torque exerted by external forces about the center of mass (CM) of the rigid body, I is the moment of inertia of the body about CM, and α is the angular acceleration of the body about CM, is derived under the assumption that internal forces exert no net torque about CM (that is, a rigid body cannot gain or lose angular momentum due to internal forces). We seem to apply this equation to rigid objects but is the assumption that internal forces exert no net moment on the rigid body a justified assumption for rigid bodies? For example, consider a disk that's subjected to a force F: 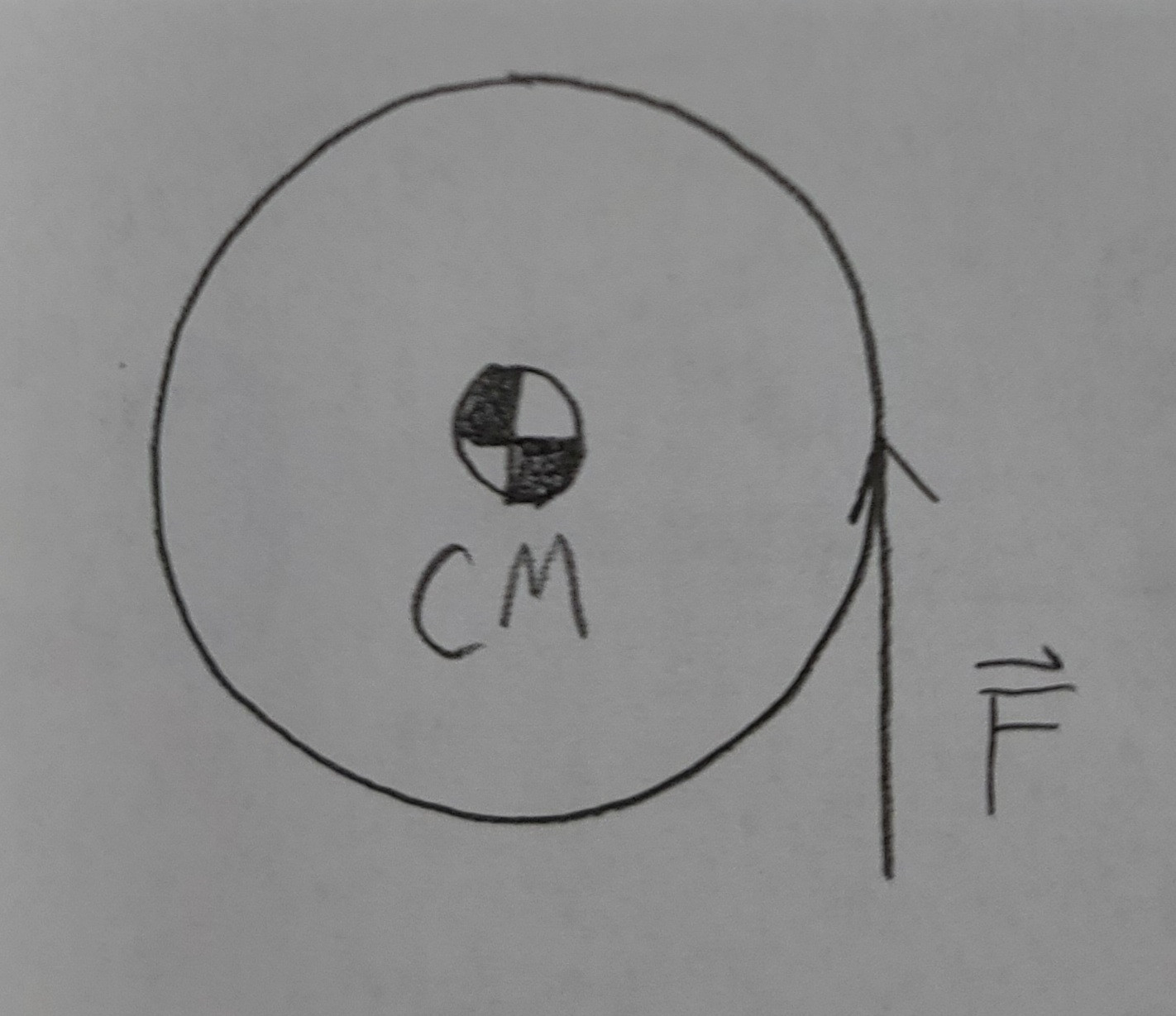 This disk, when starting from rest, will gain an angular momentum in the direction pointing out of the screen as the entire disk starts to rotate in the counter-clockwise direction. Now consider a chunk of mass dm located away from the point of application of the force F: 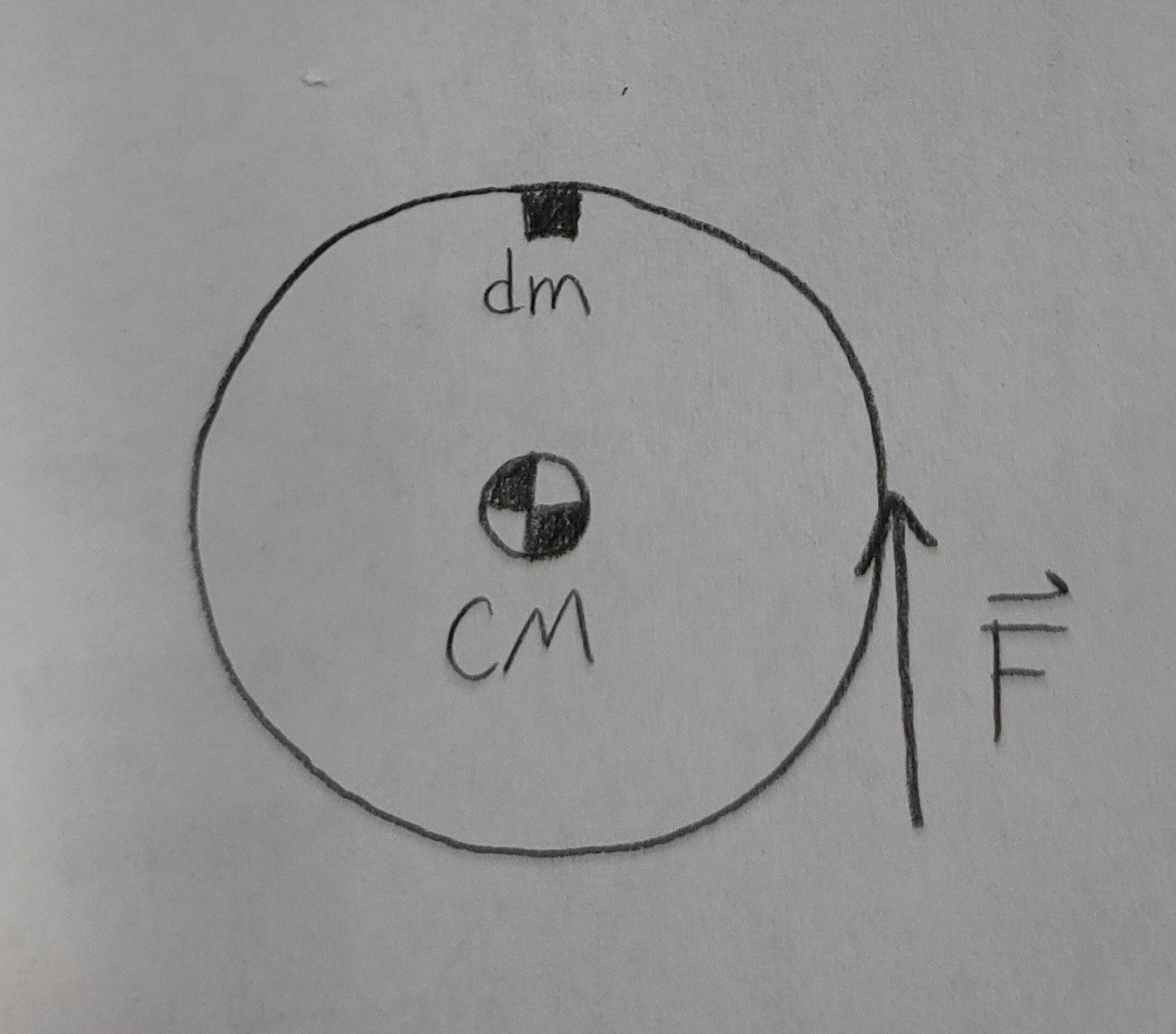 classical-mechanics rotational-dynamics torque rigid-body-dynamics
Share
Improve this question
edited May 24 at 23:28
silverbackgorilla
asked May 24 at 11:18

While considering "chunks" you are treating them as free bodies being acted upon by external forces. Internal and external forces are subject to frame of reference you choose. 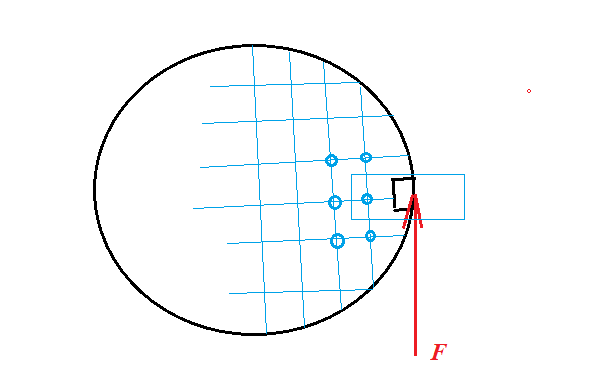 Consider your object as consisting of a number of near-infinite elements $\mathrm{d}m$, each of which connected to its immediate neighbours on a mesh (grid).

Now, if we isolate the original element (upon which the force $F$ acts) with an immediate neighbour, as done with the thin green rectangle, we can calculate how the force $F$ is 'transmitted' onto that first $\mathrm{d}m$.

Each mass element has forces acting on it in the $x$ and $y$-directions (for a $2D$ object) and these forces can be found using the free body diagram of isolated elements.

Using this method will show that the various elements $\mathrm{d}m$ are stationary with respect to the origin element and why. 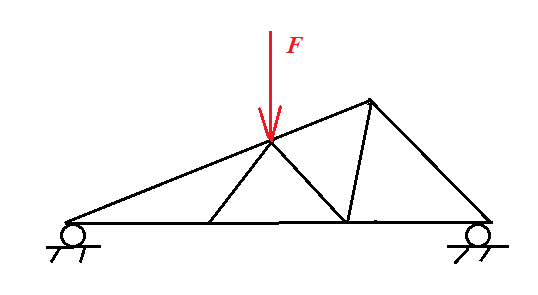 Above, an example where stresses in the beams (the nodes are considered friction free) are determined using the 'isolation' method.

You chose the frame of reference as the chunks and forces applied by any other body on the chunks would be an external force which would increase the angular momentum due to torque.

Not the answer you're looking for? Browse other questions tagged classical-mechanics rotational-dynamics torque rigid-body-dynamics or ask your own question.

4
Rotational work and forces such as static friction or ropes tension
1
Forces that exert torque on a rigid body in rotation when angular momentum is not parallel to angular velocity
0
Disk let free to rotate
0
Effect of Internal Forces on Torque
0
Off-axis torque
1
Finding Direction of Angular Velocity
1
Torque and Angular Momentum for point particles
0
Understanding the internal forces in rigid body motion
1
Are the ideas of angular velocity, angular acceleration, angular momentum, torque, etc only helpful for rigid bodies?