Where do we get our sense of perpendicularity?

However, it's not clear to me where in fundamental physics do these notions come from. The primary object that encodes which directions are perpendicular is the metric tensor $g_{ij}$ (for the sake of simplicity I'll assume $g$ is a spatial metric with no time component). This makes sense, but where in physics is it actually used? Where do we actually need to input two distinct vectors into $g$ so that $g(v, w) = g_{ij}v^{i}w^{j}$? Is there a sequence of physical experiments that would allow me to determine whether or not two directions are perpendicular?

metric-tensor vectors geometry
Share
Improve this question
edited May 24 at 2:04

In your other question ( Is simultaneity in SR merely an artifact of coordinate systems? ), I gave this answer ( https://physics.stackexchange.com/a/638018/148184 ). 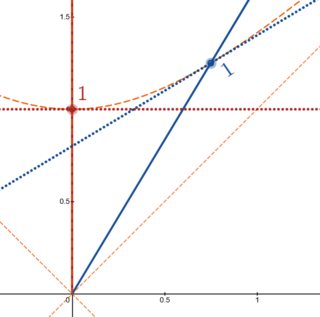 Note that when we wish to determine the velocity of a particle, and we write $\vec v=\frac{\Delta \vec x}{\Delta t}$, the ratio of the "purely-spatial component" to the "purely-temporal component" as measured in our frame of reference, it better be that these components [of a displacement vector along the particle worldline] are spacetime-perpendicular.... otherwise we get the wrong answer because it is as if we are mixing measurements in different frames of reference.

(From my answer to Why are the coordinate axes of a moving frame $K'$ tilted in spacetime diagrams? ) 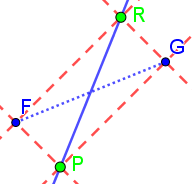 Again in the Minkowski case, one can consider a "causal diamond" of two timelike related events P and R (with P in the past of R), defined as the intersection of the future of P with the past of R. The segment FG (the other diagonal of the diamond) is spacetime-perpendicular to PR. As above, if PR is a segment of an inertial observer's worldline, then FG is spacelike and is spacetime-perpendicular to PR and is a set of events simultaneous according to that observer.

Experimentally, if P sends a light signal (say with the image of the clock-face at event P) that is somehow reflected at events F and G and is received at a common event R, then F and G are simultaneous according to PR... the segment FG is spacetime-perpendicular to PR. If another event H (on light-signal PG) reflects the signal, it won't be received at event R. Then FH is not spacetime-perpendicular to PR... and so events on FH are not simultaneous according to PR.

For an example with a Euclidean metric, consider uniform circular motion.
Since the velocity vector is perpendicular to the central force, the magnitude of the velocity is unchanged. Expressed a different way, that central force isn't doing work ($\int \vec F\cdot d\vec s$) on the particle.

In general relativity, the metric can always be chosen locally euclidean by selecting an appropriate coordinate system. Locally euclidean means $g^{\mu\nu}(x_0)=\eta^{\mu\nu}$, and the Christoffel symbols ${\Gamma^\mu}_{\kappa\lambda}(x_0)=0$. Hence your question reduces to one about the euclidean (/lorentzian) metric $\eta^{\mu\nu}$. The answers you can find in the field of knowledge of "euclidean geometry". I guess that is taught in school.

For example, you can construct an orthogonal line to another line, by choosing two points on the latter line, draw two intersecting circles with equal radius around them, and then connect the intersection points. Et voila: you get the orthogonal line. Since this is a physical experiment, and it is based on euclidean geometry, you have what you asked for. I think it won't get more intuitive than that.

Not the answer you're looking for? Browse other questions tagged metric-tensor vectors geometry or ask your own question.

1
Is simultaneity in SR merely an artifact of coordinate systems?
0
Why are the coordinate axes of a moving frame $K'$ tilted in spacetime diagrams?

4
Formulation of general relativity
0
Where to take $\theta$ (theta) in a triangle?
0
What physical sense has following transformation?
9
Can we show that time is orthogonal to space?
1
The Physical Basis of Our Assumptions about Physical Space
0
How do I determine the necessary rotation of an object so that another dependant object is displaced where I need it?
0
Are contravariant basis vectors and basis 1-forms identical?
9
In general relativity, are two pseudo-Riemannian manifolds physically equivalent if they are isometric, or just diffeomorphic?
2
How can time go in different directions in the Universe?
3
Equivalent representations of path difference? (Laue equations and Bragg's law)