Question on Roger Penrose's argument on using particles as clocks

In Roger Penrose's book Cycles of Time under section 2.3 (space-time, null cones, metrics, conformal geometry), Penrose makes the following argument which states that only particles with mass can be used as accurate natural clocks. I have attached the relevant pages as images below: 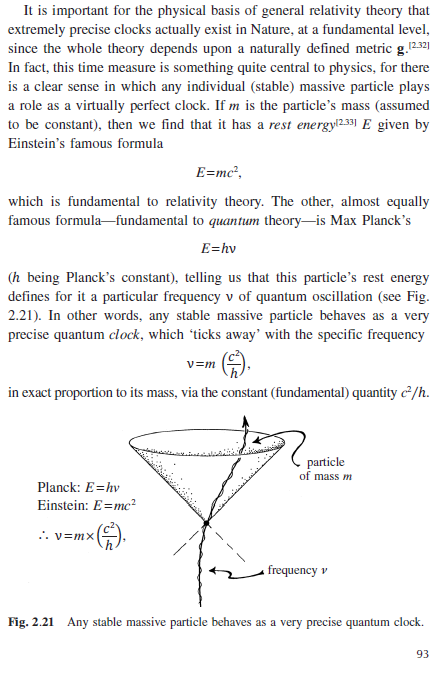 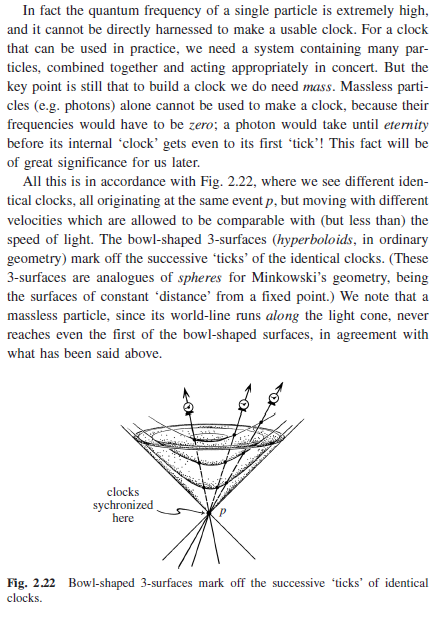 I have some questions regarding this. Penrose says on the second page that massless particles like photons cannot not be used as a clock because their mass is zero and since he derived the relation, $\nu=m\frac{c^2}{h}$ the frequency must also be zero. My questions are as follows:

Is there some aspect of his reasoning that I have misunderstood? If so please let me know.

In Penrose’s construction, the m is the invariant mass… and thus the frequency obtained is invariant (independent of frame).

For a photon, the invariant mass is zero. So that frequency via this construction would be zero, as stated.

While photons have a frequency, that frequency depends on the frame… (since the energy and momentum depend on frame).

Thus, photons do not have an invariant frequency, whereas the massive particles do have one in this construction.

In a light clock, one needs a pair of photons with opposite spatial directions…. the transmitted signal from the source and the reflected signal off a mirror back to the source. The tick of the clock along the massive particle source can vectorially decomposed into the sum of the light signals’ spacetime displacements…. Essentially a light cone coordinate expression of the timelike segment along the particle worldline.

I think he just means that massless particles cannot be used to act as the particular type of clock he has in mind. His point seems to be that since photons move at the speed of light, time for them stands still, so they would be eternally stopped as a clock. Clearly photons can be used in light clocks, and they do have a well defined frequency that can be used as a measure of time.

So the basic reason that photons moving in one direction can't do it is that they cannot be viewed at rest and so you don't have a rest description of the clock. In some sense a clock should be measuring time in a specific frame of reference and a photon by itself doesn't have a frame of reference.

As a result, constructions of a light clock typically use photons moving in opposite directions, so e.g. a mirror is used with an emitter and detector.

This creates a distribution of photons with no net momentum in the clock frame. Mass is famously not additive in relativity, but with this exception: mass is additive for systems which have no momentum in a shared frame. And this “standing wave” configuration of photons does have mass even though the individual photons do not (this is indeed a manifestation of the failure of additivity of mass, $0+0\ne 0$). You can derive this mad of a photon gas in a few ways, but my favorite is gravitational: align the mirrors with a gravitational field and ask how the gravitational redshift causes less force “upward” than downward and you'll find an extra gravitational force like a mass $n~h~f/c^2$.

The photon from a point source is not actually confined to a single lightcone - if it was, it would cross any spatial slice in a zero-extent instant, and thus could not have a wavelength. It's actually a set of nested lightcones, the phase on each lightcone is constant, and the oscillation varies in phase only as you slice through the sequence of cones. The 'oscillation' of a photon is thus a timelike-extended structure, and thus can only originate from a timelike source - i.e. a charged particle with mass.

Q2. It would be more correct to call it the "proper frequency" - the frequency in a particle's rest frame. The frequency in general frames is not invariant, and so would not make a good clock. In particular, the frequency of a photon would vary depending on the observer's frame, being Doppler-shifted.

Photons do have a non zero frequency. How has Penrose arrived at a result that contradicts this fact? Can't the frequency of a photon be used to measure time?

This formula can only be used for massive particles. For massless photons the formula is $\nu=\frac{E}{h}$, in which no mass is present. So why can't you use this frequency? The problem is that the photon always travels at the speed of light (and not most of the time). The photon experiences no passage of time, so how can it be used to measure the passage of time? If the clock on a photon always points to zero you can't use it as a clock.

Isn't $E=mc^2$ the rest energy of the particle? Particles like photons are seldom at rest so how is Penrose equating this energy with the Planck's equation $E=h\nu$?

It's indeed the rest energy of the particle. But the photon, as said, is never at rest (not even seldom!). Because it has no mass. The formula $E=h\nu$ holds for all particles, so you can use it for photons and massive particles alike.

I think Penrose's point is less about how a clock might be assembled, and more about how to independently calibrate it.

In principle you could construct a light-clock, based on the period taken for light to travel the length of some apparatus. But two light-clocks might run at different speeds, without some recipe to ensure both apparatuses are exactly the same length. Time-periods and distances are generally interchangeable in relativity; finding a standard ruler is a problem equivalent to calibrating a clock. (It would be like sending instructions for a grandfather clock by telegram to someone in another country who does not know the same measurement units as you used to specify the pendulum length.)

The key insight is the existence of elementary particles, which possess some properties that are always identical between different instances from the same particle species. For example, different observers could agree to all independently calibrate their respective rulers to be the length of a billion carbon atoms. And starting from one dimensionful property like this, they can also construct a scheme to calibrate their clocks. Only once they've calibrated their clocks consistently, they can start performing experiments to quantify how time itself flows differently in different places.

Specifically, Penrose's scheme is equivalent to calibrating your clock to tick with a frequency exactly the same as the EM oscillation of a photon that has the total mass-energy of a particular fundamental particle at rest. (He needs to specify "at rest" because any particle can have arbitrary mass-energy given sufficient momentum; the rest-mass property is identical between all particles of the same type. And only by choosing an invariant property that has a nonzero value, can we use it to scale our units of measurements.)

It's not immediately obvious whether Penrose's scheme has a more fundamental physical interpretation, i.e., as the "quantum frequency" of the election, quark, etc, itself. Most classic QM experiments demonstrate the wavelength of a particle, rather than directly measuring any fundamental time period of the particle. (Also, it is generally not possible to prepare any particle exactly at rest..) When reading Penrose be aware that while his work proving the collapse of stars to black holes was absolutely solid, when addressing pop audiences he has a tendency to also promote ideas that are speculative (such as quantum consciousness, cyclic cosmology, etc).