What does collision between electrons and atoms mean?

Now, it's generally taught (and even visualised) that atoms are like balls which bump when collided with other atoms. And it's also said that electrons collide with atoms. I am reading the Drude model of electrical conductivity, there one of assumptions was made that electrons collide with ions. I actually have a problem with that, which is that when I say an atom it doesn't have any layer covering nucleus and electrons. It simply means nucleus together with electrons right? Now the same applies to ion as well. So my doubt is if we don't have any layer covering atoms why electrons are said to bounce off with atoms or molecules or ions? In simpler terms my doubt is what does electrons bouncing of ions really mean? Does it mean like atoms are balls through which electrons are bounced off?

One has to keep clear that there are two kinematic mathematical frames to model particles: a) the classical mechanics frame and b) the quantum mechanical frame.

Now, it's generally taught (and even visualised) that atoms are like balls which bump when collided with other atoms.

This is the classical mechanics frame.

an atom it doesn't have any layer covering nucleus and electrons.It simply means nucleus together with electrons right?

Wrong at the quantum level. See this simple depiction of the hydrogen atom in the Bohr model, a first approximation to the quantum mechanical solution.

The nucleus itself, in size,is a dot at the center . The analogous drawing can be made for atoms in general, the electrons are in orbitals a very large distance away from the positive nucleus.

In simpler terms my doubt is what does electrons bouncing of ions really mean?

It means an electron interacts with the quantum entity "ion" with a certain probability of scattering, as quantum mechanics only predicts probabilities, not tracks.

The Drude model is a classical mechanics model, 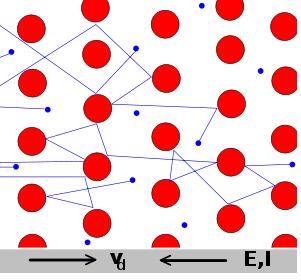 It assumes as dimension of the atom the one imposed by the quantum mechanical binding of electrons to atoms, so if the atom is neutral it will be like a tiny ball hitting a large ball, if it is an ion like a tiny charged particle hitting a much larger charged particle. (The size and shape of atoms and molecules is determined by the quantum mechanical solutions for the atoms and molecules)

Not the answer you're looking for? Browse other questions tagged quantum-mechanics electrostatics electricity atoms or ask your own question.

10
What makes the difference between ionic and covalent bonds?
3
what is the mechanism of water conductivity?
2
Do ionisation of atoms release photons?
21
What does an orbital mean in atoms with multiple electrons? What do the orbitals of helium look like?
0
How does a hydrogen ion gas cool?
3
Which types of collisions contribute to electrical resistivity?
1
The net charge of Earth
0
Can a gamma ray or x-ray cause an isotope change of a nucleus with all its electrons stripped away?