Thinking on a 2D plane, Is the "point" of the big bang still active?

From what I understand, the light from CMB that we can observe is the result of the last scattering from the big bang which happened 380,000 years prior to the pattern we can see. 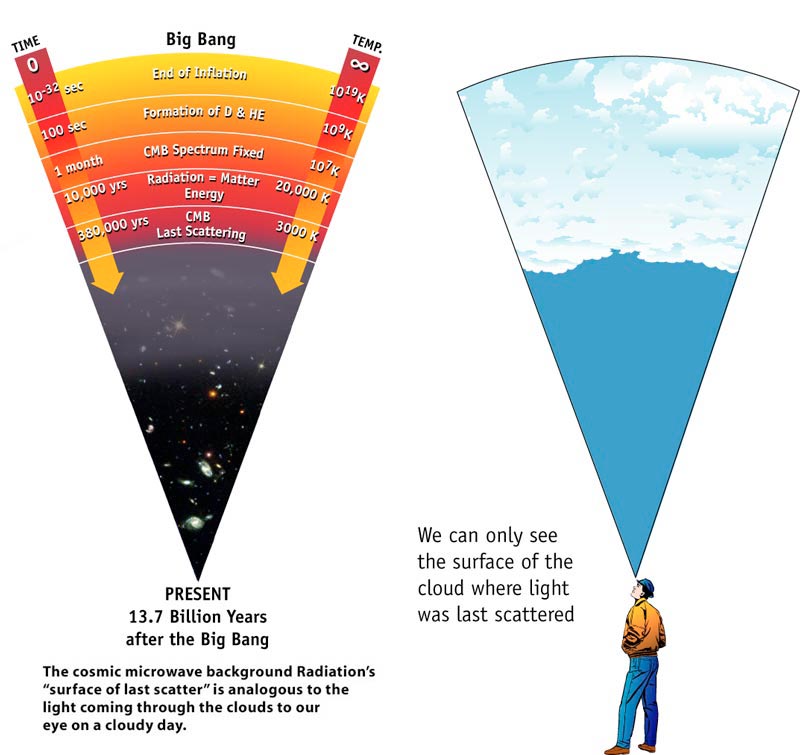 While it seems that the CMB is the limit of our observable universe, I'm understanding that there this isn't the limit to the whole universe. Meaning there is still space from when the CMB pattern was formed and the distance that the universe has expanded out from the origin of the big bang. Is there any way of knowing if this region of space is still active in some scale to the creation energy that the big bang produced but being so far away that it isn't ever going to be observable to us given expansion and inflation?

big-bang cosmic-microwave-background observable-universe
Share
Improve this question
asked May 20, 2021 at 12:44

Light travels at a finite speed, so visible objects that are more distant in space (in any direction) are also more distant in time (in the past direction). Therefore it can be hard to tell the difference between a boundary in space and in time. On top of that, every familiar example of a boundary is spatial. So you'll often hear it said (even by me) that the edge of the observable universe is 46 billion light years away, but it's really better to say that it's 13.7 billion years ago.

The origin of the universe is "behind" the CMB surface, but that means it's at an earlier time, not a more distant position – and in particular, it's not at the spatial center of the universe (there isn't any).

That said, it's possible that part of the initial state of the universe, whatever it may be, is outside our past light cone. That would mean that it hasn't unambiguously happened yet (nor unambiguously not happened yet).

Not the answer you're looking for? Browse other questions tagged big-bang cosmic-microwave-background observable-universe or ask your own question.

6
How does the Cosmic Microwave Background give us information about the Big Bang?
3
Infinite Universe and the big bang
11
How do we know what happened during the Big Bang?
1
Is it possible that big bang are still happening?
7
Why is CMB not considered as the edge of the universe?
7
Evidence before CMB