Gauss' law and an external charge

Gauss' law states that the net outward normal electric flux through a closed surface is equal to $q_{total, inside}/\epsilon_0$. However, I'm a bit confused of why the presence of an external charge doesn't influence the solution. I always hear as a response - "any field lines entering the enclosed surface, will also leave it", which is fine. However, the field is inversely proportional to $r^2$, therefore, it will "exit" with a different magnitude and thus, with a different flux. So how they possibly cancel each other out? And if possible, I really look forward to a simple explanation, without involving too much math. I just want to get the concept. I'm sorry for such a newbie question.

electrostatics gauss-law
Share
Improve this question
asked May 7, 2013 at 20:18

In an attempt to be brief: The big thing to remember is that the flux is also proportional to the area (technically, the surface integral of the field over the area). Crudely speaking, the side of the enclosed surface with exiting field lines are further away from the external charge than the side with "entering" field lines, and the surface area increases by $r^2$ (remember the formula for the surface area of a sphere). Gauss's Law is just a mathematically precise way of stating this compensation. 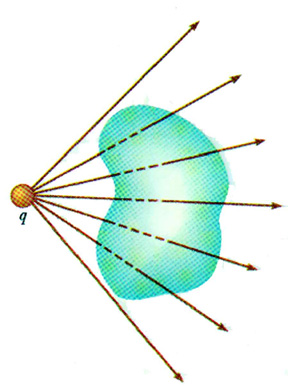 Consider this as an appendix to other answers. I hope that this will you to believe that 'the number of lines' is not only a qualitative description of the flux, but also quantitative.

Actually, with the use of Gauss' law, you can prove that the flux through a surface is proportional to the number of lines crossing it (under certain conditions). Unfortunately, I dont have time to draw neat pictures but hope that imagination will be enough.

Lets start from one charge in external field (so that all field lines start from this charge). Consider a small surface that you want to get the flux through. Lets say it is some disk. Then, you can move the boundary of this disc towards the charge along the fieldlines, so you will get a kind of deformed cone with the charge being the vertex. Now, we cant talk about the field at the charge, so we subtract a smaaaal ball around this charge from the cone. We have now two places where the field lines intersect the cone -- near the charge the lines enter into our cone, and then exit it through our surface (since the lines are tangent to the other parts of boundary by construction). Now, it is clear (from Gauss' law) that the flux is also the same. And, near the charge, it is clear that if draw many enough lines, and distribute them homogeneously around it, as far as in this small area the field is determined mostly by the charge itself, the flux is proportional to the number of lines. So, as we have shown, this flux and the number of lines are just those that pass through our surface.

When we have several charges, we have to divide our surface into pieces such that each piece moves entirely to its own charge. Actually, such a piece always has a charge to go to, but it may have two options -- to go either to a negative or a positive charge. And you have to make the total number of lines going from a charge to be proportional to its value. Surely, there is a numerical error, which goes to zero as you increase the number of lines per unit charge. And, once again, this is funny that this process described above naturally cuts any surface into pieces which can be attributed to charges (or pairs of charges).

2
Gauss' law giving zero field where field is not zero?
2
Why does Gauss's law work for a charge off center in a spherical surface?
1
Gauss Law - charges outside the gaussian surface
1
Gauss Theorem and Faraday's Law
0
What does the charge density signify in the differential form of Gauss law?
0
Electric Flux by Gauss Law
4
Why is Gauss' Law for Electric Fields still applicable when $\vec{E}=kr^3\hat{r}$?