When I studied physics in High School and in Mechanical Engineering, I learned that friction is separated into two groups:

I also know that tires have no relative motion with the ground at the point of contact (as long as you're not slipping). (Same with walking)

So when I look at this IB physics problem from the Oxford IB physics textbook, I get a bit confused. 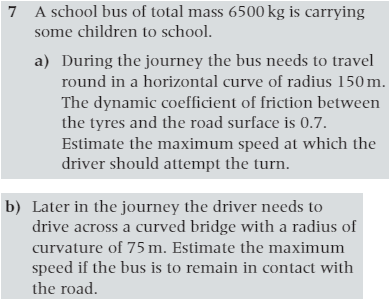 Now maybe it's a mistake on their part in terms of how they worded it but just to be sure I did some research and found this: https://magazine.mosa.com/en-gb/what-is-dynamic-coefficient-of-friction-five-things-you-need-to-know

Which talks of a dynamic coefficient of friction that is applied to situations including walking (where before we would have used the coefficient of static friction because of no slip). When someone says walking, to me that means no slip, otherwise you wouldn't be walking, but slipping... So perhaps that's an error in their wording as well?

In conclusion, I am currently extremely confused. How are we using a dynamic coefficient of friction to represent a situation in which we are walking or driving without slip? Can anyone help me clarify what is actually going on, because it seems to me like either I don't understand the physics OR the wording is wrong in both the question and in the article I linked.

Notice that they are looking for the maximum possible speed in both cases. So what they are looking for is the speed for which the centripetal acceleration is provided by limiting friction. Usually the coefficient of limiting friction is slightly higher than the coefficient of dynamic friction, but here that is being ignored. If the speed were to be more than the maximum possible speed that you have to find out, friction, having a limiting value would no longer be able to supply the requisite centripetal acceleration and hence tires would skid.