How to represent the reduced mass in the curved space form, while studying a two-body system in GR?

The motion of a two-body system under their internal forces (assuming no external forces) can be studied using the Lagrangian analysis.

We assume that both the bodies experience equal and opposite forces and rotate around the common centre of mass. Then, the differential equations describing the orbits (see (1), (2) and (3) in image) have the reduced mass terms to represent combined motion of both the masses.

In these equations, if we assume that the central mass is very large compared to the planet mass, then the planet mass (m2) term vanishes and orbit equations become dependent only on the mass of the central body (m1). This situation is similar to the Schwarzschild solution results (eq. (4) in image) for a large central mass. The GR analysis suggests that the space-time around the large central mass gets curved and therefore the planets have to necessarily follow a curved path. The nature of the curved path is independent of the mass of the planet. Therefore, even a photon (which has zero mass) path has to bend as the space itself is curved.

But, we may also have a situation where the planet mass is not very small compared with the central star. Then according to the classical analysis, the rotation of both the bodies around the common centre will have to be considered. In a classical analysis, this two-body system can be represented mathematically as a single reduced mass rotating around the centre. Similarly, an analysis for the two-body system, based on GR should also consider the resultant curvature created by the both masses.

The question is: How to include the reduced mass term in the GR analysis? This is necessary to ensure that the results of the classical analysis and GR are consistent with each other. 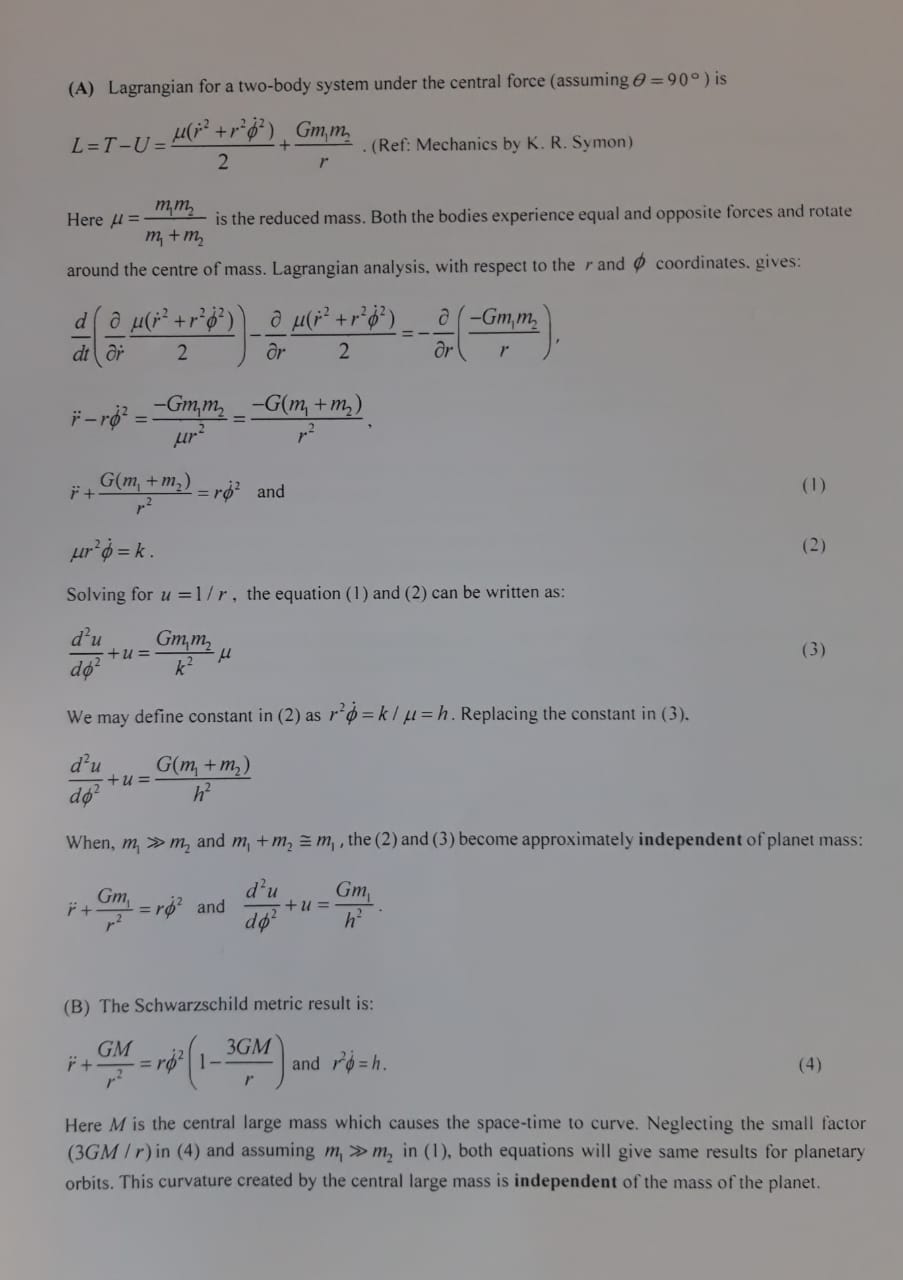 The short answer is that the full two-body problem is insanely hard in GR.

Certainly, we can take the Newtonian point-particle limit of GR. In this case, the problem reduces to Newtonian gravity with a series of relativistic corrections; and in the limit where the speeds of the particles are much less than $c$ and their separations are large compared to their Schwarzschild radii, all of these corrections vanish, leaving the expected Newtonian limit $$ \ddot{\vec{r}}_i = - \sum_{j \neq i} \frac{m_j(\vec{r}_j - \vec{r}_i)}{|\vec{r}_j - \vec{r}_i|^3} $$ (in units where $G = c = 1$.) So in this regime, the notion of reduced mass will continue to be useful and valid; and in this limit, Newtonian gravity agrees with GR, as it must.

However, if you want to do a situation where two fundamentally non-Newtonian objects are orbiting around each other, that requires quite a lot of computer code and expertise. The main example that has consumed a lot of blood, sweat, and tears in the GR field over the past 20 years or so is the simulation of two black holes orbiting each other and spiraling inwards due to gravitational radiation. In a strongly curved spacetime like this one, familiar Newtonian notions like the center of mass of a system and the total mass of a system (let alone the reduced mass) are remarkably difficult, if not impossible, to define. But these are regimes in which we don't expect the results of Newtonian gravity to hold anyhow.

We may (?) conduct the GR analysis of two-body problem in two steps:

This approach can be easier, if a direct mathematical transformation/analysis of a two-body system is difficult.

0
Two body particle problem with reduced mass
0
The two-body problem - planets orbiting each other
1
solving a two body problem using relative motion and reduced mass
0
Meaning of the focus of an elliptical orbit
3
Angular momentum of a two-body system
0
How does the gravitational field of a massive body affect the orbit of that body around yet another massive body?
6
How does the orbital motion of reduced mass tell us how the individual planets/stars move?
1
Why do the 2 planets in a two-planet system orbit around the center of mass?