You probably know that if you try to draw a line using a piece of chalk on a blackboard , under some conditions (for example, $\alpha<\frac{\pi}{2}$ in the picture below) you will have a dashed line pattern instead of a continuous line.

(how) Can you model this special movement of the chalk ,and specially , find the length of line segments and the distance between them(which are the visible characteristics of the motion)?

Note:gravity is present. (I think it affects the solution, at least in some models) 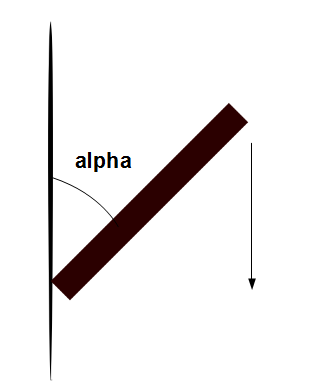 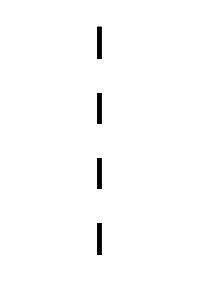 newtonian-mechanics kinematics everyday-life
Share
Improve this question
edited May 8 '13 at 13:12
Zorich
asked May 7 '13 at 18:24

The phenomena that you are talking about is called Stick-slip. This short paper explains it in detail. To summarise it, there are two types of friction coefficients: the static co-efficient, which acts on static objects, and is what stops an object from being moved, and the kinetic coefficient, which resists moving objects. When the chalk is pressed into the board, it yields momentarily to the force (this yielding depends on different factors including the porosity of the chalk. However, when the force applied overcomes the static coefficient, the chalk skips forward at speed. However, the adhesion between molecules in the chalk and the board means that some parts of the chalk are torn off, resulting in the mark: chalk relies on friction to make a mark. On the other hand, when it is moving, the lower kinetic coefficient means that the chalk does not make a mark. Once the chalk comes to a rest again, the process repeats itself, leaving a dotted line.

The formula for friction is $f =\mu n$, where $\mu$ is the frictional coefficient.

Let $F$ be the force applied to the chalk.

Not the answer you're looking for? Browse other questions tagged newtonian-mechanics kinematics everyday-life or ask your own question.

1
Line integral calculates work, even though the force from the vector field doesn't cause the movement?
13
What's the origin of the flattened X that appears when of a small (but powerfull enough) light is reflected in our non-powered TV screen?
2
Cable wakeboard raley
0
Why do my boundary conditions not work out in a damped harmonic oscillator?
3
How to teach modeling physical systems?
1
Why do people fall over while cycling in a straight line and leaning to one side?
7
Colour patterns from the reflection of my window