Do spinors form a vector space?

In contradiction to a number of other authors (sample ref below), Gerrit Coddens, at France’s prestigious Ecole Poytechnique, asserts that:

2.2 Preliminary caveat: Spinors do not build a vector space

As we will see, spinors in $SU(2)$ do not build a vector space but a curved manifold. This is almost never clearly spelled out. A consequence of this is that physicists believe that the linearity of the Dirac equation (and the Schrödinger equation) implies the superposition principle in QM, which is wrong because the spinors are not building a vector space. In this respect Cartan stated that physicists are using spinors like vectors. This confusion plays a major rôle in one of the meanest paradoxes of QM, viz. the double-slit experiment.

…in his recent preprint submitted to the HAL archives in March 2021: “The geometrical meaning of spinors as a key to make sense of quantum mechanics. 2021. ffhal-03175981” available through https://hal.archives-ouvertes.fr/hal-03175981 (where the download button refers to it, confusingly, as Spinors and Dirac 4.pdf) . The same view has been developed via an earlier and perhaps better-known paper “Spinors for everyone” (accessible in browsers) and his seductively-titled book published in 2015 From Spinors To Quantum Mechanics.

Authors stating that spinors do form a vector space include Jean Hladik’s crystal clear “Spinors in Physics” Springer 1999 (p. 24), as well as the standard https://en.wikipedia.org/wiki/Spinor .

While attracted to Coddens’s stated promise to: " provide the reader with a perfect intuitive insight about what is going on behind the scenes of the spinor algebra" and also to "make sense of QM" I am loathe to spend time on what may be a mathematical statement at variance to conventional definitions.

My question is therefore “Do spinors in general form a vector space, or do they do so only in restricted cases?”

I hope to describe things well:

Here is a quote from his in the OP-mentioned monograph From Spinors To Quantum Mechanics, p. 48-49:

In fact, the group structure of the rotation group exists without any reference to a vector of $\mathbf{R}^3 $. All that the group structure really defines is the multiplication table of group elements. Such a multiplication table can be considered as the extrapolation to an infinite group $G$ of what a Cayley table is for a finite group. Considering the rotations as elements of a group introduces a real paradigm shift: a rotation is considered as a function acting on other rotations rather than on vectors. (footnote 1) The action of this function on the other rotations is just a left multiplication with a group element in the abstract group, [...]

The true objects of study in group theory are not the vectors but the elements of $F(\mathbf{R}^3, \mathbf{R}^3)$ (the set of all mappings from $\mathbf{R}^3$ to itself - my remark), as the abstract axioms of a group deny citizenship to the vectors by completely ignoring them and excluding them from the formulation. The composition law that is the subject of study is the composition of functions.

Now, what's happening here is that he removes reference to vectors in $\mathbf{R}^3$ altogether by using the so-called automorphism representation of the (universal cover of the) rotation group (i.e. $g_j\in\text{SU}(2) \mapsto f_g(g_j):= g\circ g_j $), and

Therefore, the 2 × 1 column vectors the 2 × 2 matrices of the representation work on must code rotations

This coding actually means that the sum of two 2 x 1 column vectors will not code a rotation, so he concludes that the spinors do not form a vector space, but itself the spin group manifold $\text{SU(2)}$ (or $\text{SL(2},\mathbb{C})$ for Lorenzian spinors).

Here is his master page 51, describing the whole construct for spatial rotations. 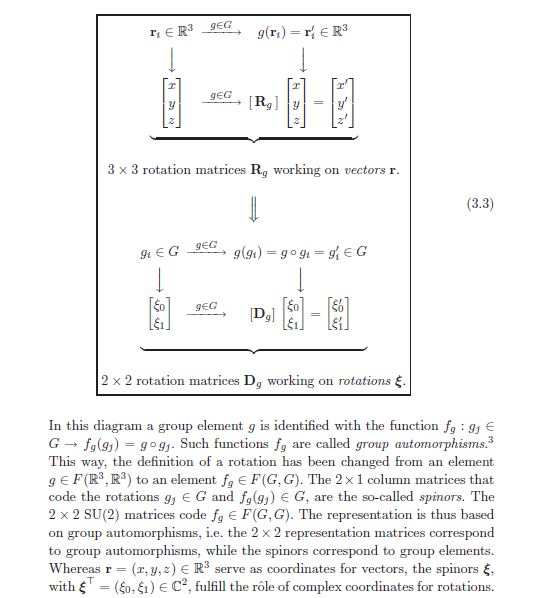 This is basically a new theory of spinors altogether. The fact that spinors are directly spin group elements is a novel approach to the standard one in the QM/QFT literature, in which spinors are elements of the topological vector space carrying a continuous representation of the universal covering group of rotations in Euclidean/Minkowski space(time). Coddens' view is a proposal in the spirit of Cartan, in which geometry is primordial and he claims to provide an alternative to the Penrose/Rindler approach to spinors. The traditional view of spinors comes from (axiomatical) quantum field theory and is in essence algebraic/functional analytic through the original ideas of van der Waerden/Wigner/Bargmann.

I've only had a quick look at the Coddens paper, but if I understand it correctly what he is doing is the equivalent of saying that the set of unit vectors are not vectors, because they don't form a vector space. You can't 'add' two unit vectors together and always get another unit vector.

In 3D, the geometric algebra consists of a scalar (1), three basis vectors (x, y, z), three bivectors representing coordinate planes (yz, xz, xy), and a trivector (xyz) representing the oriented volume element. The even sub-algebra is the linear combinations of $1, yz, xz, xy$ where $(yz)^2=(xz)^2=(xy)^2=-1$. The 3D spinors are thus just the quaternions.

If we have two generic vectors $a$ and $b$, then $ab=a\cdot b+a\wedge b=|a||b|(\textrm{cos }\theta+B \textrm{sin }\theta)$ where $B$ is the unit bivector in the plane of $a$ and $b$ and $\theta$ is the angle between them. If the vectors being multiplied are parallel, the result is a pure scalar, if perpendicular then the result is a pure bivector. The dot product is familiar from vector algebra, and is just the scalar part of the geometric product. The wedge product is the bivector part, and is dual to vector algebra's cross product. (We have to use the dual to turn it into another vector because vector algebra can't cope with bivectors. However, this doesn't work perfectly because it transforms wrongly under reflections - i.e. the cross product gives a 'pseudovector', not a vector. Pseudovectors are actually bivectors.) Thus both products from vector algebra are unified in a single product in geometric algebra, and correspond to finding the 'real' and 'imaginary' components of a spinor.

The complex column vector representation of spinors arises from noting that $xy$ acts like the imaginary unit $i$, so $\alpha(1)+\beta(xy)=\alpha+\beta i$ and $\gamma(yz)+\delta(xz)=(\gamma+\delta(xy))(yz)=(\gamma+\delta i)(yz)$ so the quaternion can be encoded as two complex coefficients of a vector space over the basis $1, yz$.

In geometric algebra, spinors implement rotation by conjugation. To rotate a vector $v$ by the rotation represented by the spinor $S$, we find $SvS^{-1}$. If $S$ has a norm different from 1, then $S^{-1}$ has the reciprocal norm, and they cancel. This is why a (non-zero) scalar multiple of a spinor corresponds to the same rotation, and why we can add spinors together without giving rise to any problems. We commonly use unit spinors (called rotors) to represent rotations so that we have an unambiguous representation, like we commonly use unit vectors to represent things like surface normals, where the length doesn't matter. (That is to say, as a complex column vector, these are 'unitary' and transform as SU(2).) But using unit spinors to represent rotations doesn't mean they're not elements of a vector space any more than using unit vectors does. It's also the case that the sign cancels too, so $-S$ gives the same rotation as $S$, but is not the same spinor.

I find that geometrically, the best way of visualising a 3D spinor is as the angle between a pair of oriented reflection planes. ('Oriented' means the plane has a well-defined front and back.) If the planes are identical, the reflections cancel, and the identity results. (i.e. with parallel vectors we get a pure scalar 1.) As you rotate one plane with respect to the other, the results is a rotation through twice the angle between the planes, about the axis along which the planes intersect. When the angle between the planes reaches 180 degrees, the planes are parallel, but with normals in opposing directions. Again, the reflections cancel, so this represents a 360 degree rotation, but this is not the same spinor! The 180 degree angle means one plane is the negative of the other. If you keep on rotating the reflection planes, eventually a 360 degree angle between reflections corresponds to a 720 degree rotation, and we have identity again. It is not true that rotating a spinor 360 degrees gives the opposite sign, and you have to rotate 720 degrees to return to where you started. What happens is that rotating the spinor through an angle increases the corresponding rotation by twice the angle, so rotating a spinor 180 degrees negates the spinor but turns the rotation right around, and rotating the spinor 360 degrees corresponds to a rotation of 720 degrees. The spinor is not the rotation - it is the angle between the pair of (oriented) reflection planes that make it up.

So spinors do have a perfectly understandable geometric interpretation.

It is for the same reason that in general relativity the curved space-time manifold should not be considered as embedded in a vector space, but described intrinsically. The points you would have to add to obtain an extension in the form of a vector space wherein the curved manifold could be embedded do not exist physically. That vector space would have to be ${\mathbb{R}}^{5}$, just like the two-dimensional surface of a sphere is embedded in ${\mathbb{R}}^{3}$. The points of the extension to ${\mathbb{R}}^{5}$ that do not belong to space-time would just be physically meaningless.

This argument is similar to that made for $S_{n}$, but this time the group is a Lie group and therefore no longer a discrete finite set but a differentiable manifold.

The question is tricky, because we must answer the following question: "can we make superpositions of different spinors of the same rank?". Mathematically - yes, we can, why not?, it is just a matter of definition of a spinor space, but physically we may not because the energy of a system may depend on the particular spin configuration, so different spinors belong to different Hamilton eigenvectors, and we must make superpositions of the total time-dependent wave functions rather than just their spinor parts, I guess.

H. Ohanian (Am. J. Phys. 54 (6) 1986) tried to give a "classical" meaning to spin as an angular momentum of a spinor wave packet. The most essential part of his calculations is fading the wave packet in the transverse directions. But this fading is just a simplified (mathematical) description of influence of the particle source and the surrounding matter. I can safely say that spin is a property of an elementary excitation of a complex system (world).

Not the answer you're looking for? Browse other questions tagged vectors group-theory definition representation-theory spinors or ask your own question.

12
Conflicting definitions of a spinor