The following diagram summarizes what, I think, are the forces involved in the movement of a rotating ball at the end of a rope. 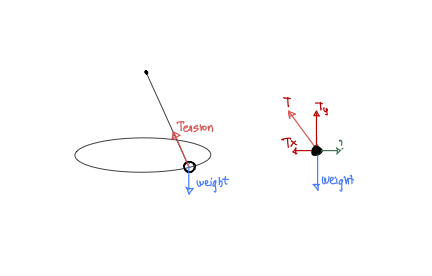 Here, tension and weight are real forces (non fictitious) for an external observer (even for an observer on the ball surface). Weight is compensated by the $T_y$ component of tension.

Hence: what does compensate the $T_x$ component of the real tension force? The fictitious centrifugal force?

Many thanks for the answers. I summarize the actual situation in a diagram, including how the centripetal acceleration $\vec{a_c}$ in $T_x$ must be added to speed $\vec{v}$ to change speed's direction but not speed magnitude (the sum of vectors must be an equilateral triangle). 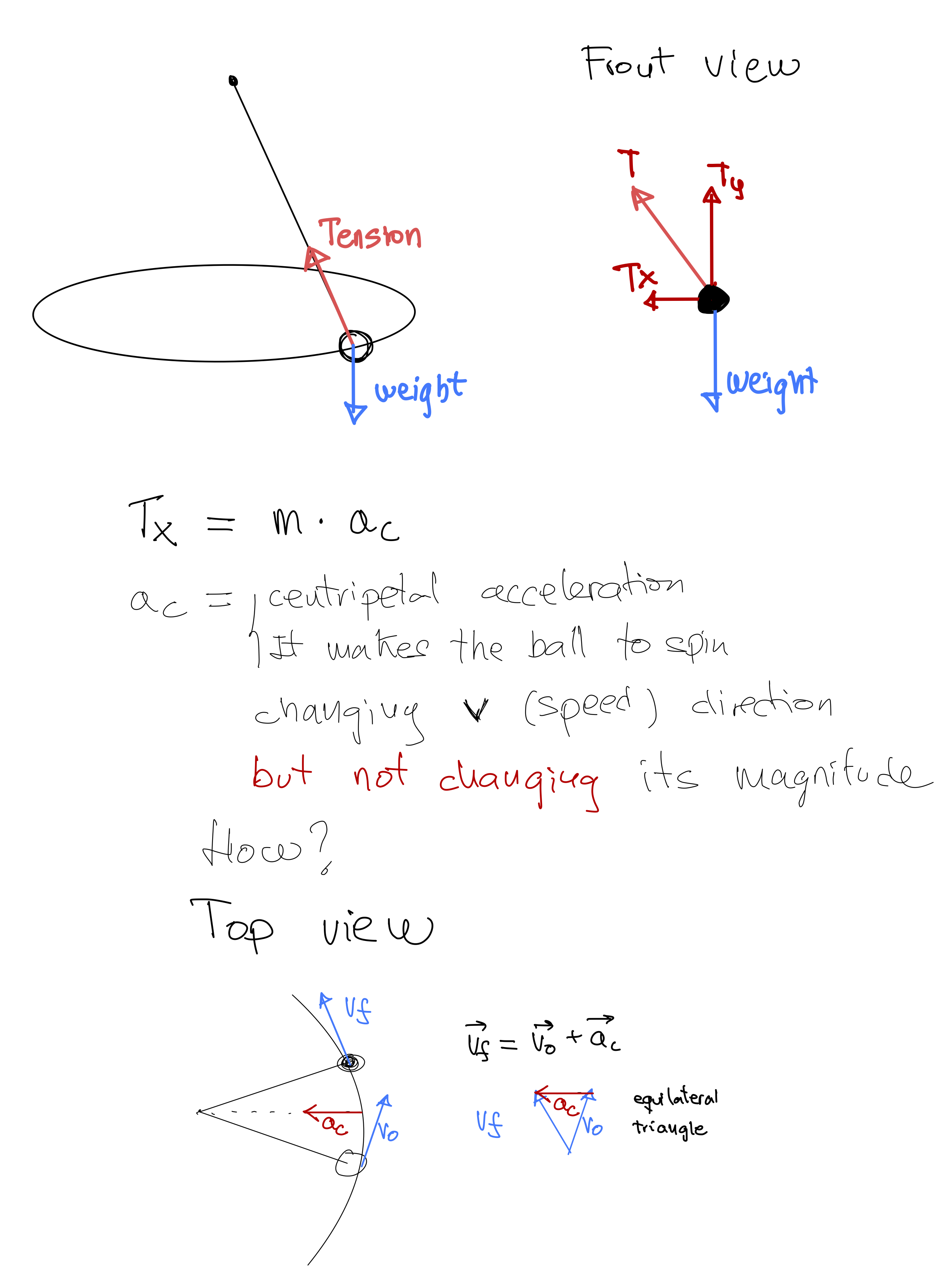 newtonian-mechanics forces rotational-dynamics centrifugal-force
Share
Improve this question
edited May 16, 2021 at 9:55
cibercitizen1
asked May 15, 2021 at 20:36

From an inertial observer, the $T_x$ is what provides the center-seeking centripetal force, such that $T_x=\dfrac{mv^2}r$ which is what ensures the motion is circular. If the $T_x$ was balanced (and $\sum \bf \vec F=0$), then there would be no circular motion and as pointed out in the comments, the ball would travel in a straight line.

However, from the non-inertial frame that tracks the conical pendulum bob, the $T_x$ force would in fact be balanced by the fictitious centrifugal force (such that the net force is zero, since the pendulum bob is not accelerating with respect to its own frame). 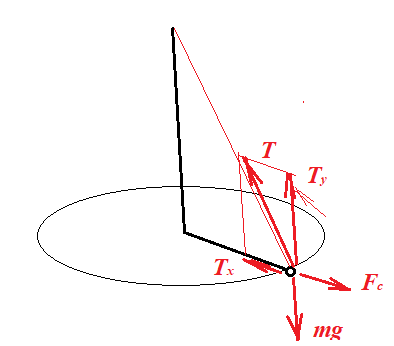 To illustrate @user25's point, see the diagram above.

In the non-inertial frame made up of the two black axis, the centrifugal force $F_c$ is real and prevents $T_x$ from dragging the object along the $x$-axis.

The term 'fictitious' is a misnomer: we experience the centrifugal force every time we're inside a vehicle that changes direction.

It's not clear why you suggest that the $T_x$ component requires compensation.

In order to sustain circumnavigating motion a centripetal force must be provided.

When it comes to motion there is only one reference: the inertial coordinate system.


Since the inertial coordinate system is your reference of motion anyway the straightforward choice is to simply see it that way.

There a psychological dimension here that needs to be recognized. It has to do with how perception of gravity works.

The perception of gravity is different from the perception of other ways force can be exerted upon you. Example: let's say someone is tugging your coat. Some parts of your coat will press against your skin, and you notice that.

Gravity however, acts on all parts of your body the same.

Perception of gravity builds up as follows: when you are standing up your feet have to carry the entire weight of your body, but your pelvis only has to carry your weight from the pelvis up; your neck only has to carry the weight of your head. All parts of your body have sensor cells that report how much compression they are sensing. From your ankle bones up to your neck bones there is a gradient in how much they are compressed. That directional gradient, combined with the sensor input of your equilibrium organ, gives rise to the perception of gravity.

That is: our perception of gravity is not a direct perception. Instead evolution has equipped us with a built in system to infer the presence of a gravitational force.

That system operates automatically. Wenever we sense this directional gradient of compression we infer the presence of a gravitational force.


In a car negotiating a bend

When you are sitting in a car, and the car is taking a corner a force towards the inside of the curve must be provided to sustain the curvilinear motion.

That physical sensation is identical to being subjected to a centrifugal force because inertial mass is equivalent to gravitational mass.


This, I believe, is why everybody who first starts thinking about cirvilinear motion automatically starts with thinking in terms of a centrifugal force.

What is actually happening is that you are subjected to a centripetal acceleration, and because your body has inertia your body gets compressed a bit.

Not the answer you're looking for? Browse other questions tagged newtonian-mechanics forces rotational-dynamics centrifugal-force or ask your own question.

3
Turning an airplane - coordinated turn and inclinometer ("the ball")
1
Is there a reaction force on the ball in a vertical circular motion?
3
Understanding a rotational system with centripetal snap, angular jerk, and a third-dimensional tension vector
1
Forces of a conical pendulum in the reference frame of the ball (of the pendulum)
1
Rotating rope with a ring
1
Is this vector diagram of the forces at play in turning flight correct?
0
Free Body Diagram w.r.t a rotating reference frame