I'm learning quantum field theory from P&S and Srednicki. I'm having a lot of difficulties understanding the concept of a momentum state. In particular, I'm confused about how to interpret the integration over momentum space that one frequently encounters as opposed to the discrete sum and occupation basis that I'm used to from my quantum mechanics 2 class.

I'll quickly mention that yes I am aware states like $|p>$ in qft suffer from some mathematical difficulties. My question below is a physical question, as I'm trying to develop a better intuition before pushing forward with Srednicki's section on the LSZ formula.

Let me try and explain my confusion. When I studied in Sakurai's qm book, I learned that a Fock state can be thought of as some number of particles per value of momenta, like $|n(k_{1},n(k_{2}),...>$. Now for the case of a scalar field, Peskin (pages ~20-25) seems to say that a single-mode corresponds to one value of the momenta $p$, and that each value of $p$ corresponds to a single oscillator in momentum space. Did I read this correctly? How can I reconcile such an interpretation with the occupation number interpretation, which as far as I can tell doesn't make much sense in this context due to the fact that $k$ is a continuous value? If the particle changes momenta does it effectively "jump" to a new mode? (by that I mean if I was writing things in the occupation number representation, I would find initially a state like $|1(k_1),0(k_2),...,0(k_n)>$, and then $|0(k_1),1(k_2),...,0(k_n)>)$

Also, with this interpretation, how can I think about a wavepacket in qft? Srednicki eq (5.20) for example, defines a general 1 particle state as a superposition of wavepackets (which was done to ensure the state is normalizable). As far as I can tell, this comes from inserting a completeness relation for 1 particle of momentum $p$. Am I to interpret this wavepacket as I would quantum mechanically? Except now with the QFT interpretation, each value of the momenta corresponds to a particular mode that the particle is in?

You ask how you can "reconcile" the two descriptions, but they are the same thing. A free scalar field contains one independent oscillator for each momentum $\vec{k}$. That means that there is a basis of states given by specifying the occupation number for each mode $\vec{k}$. In other words, there is a basis of states where you say how many particles there are with a momentum of $\vec{k}$, i.e. a list of numbers $n(\vec{k})$ for each $\vec{k} \in \mathbb{R}^3$. This is the description you said you were comfortable with. Single particle states can be denoted as $|\vec{p} \rangle$, which is just the state where $n(\vec{p}) =1$ for one value of momentum $\vec{k} = \vec{p}$, and $n(\vec{k})=0$ for all other values of $\vec{k} \neq \vec{p}$. A wavepacket is then a state of the form $$ \int d^3 p \; f(\vec{p} - \vec{k}) |k\rangle $$ for some sharply peaked Gaussian function $f$. As you can see, this is a superposition of states, all of which contain just one particle, but where the exact value of momentum of this particle is smeared out a bit.

If the particle changes momenta does it effectively "jump" to a new mode?

First you must ask yourself why a particle would ever change momentum. In a free theory, this never happens. All particles just have the same momentum forever. In an interacting theory, however, a particle would change its momentum if it interacts (or perhaps collides) with another particle.

See the answer here for more details. Essentially, the particles will be some widely separated wave packets at infinity, collide with each other in an "interaction zone," and then leave as (different) particles. So the "jump" or "change" in the particle momenta occurs in a smeared out way over this spatial zone. 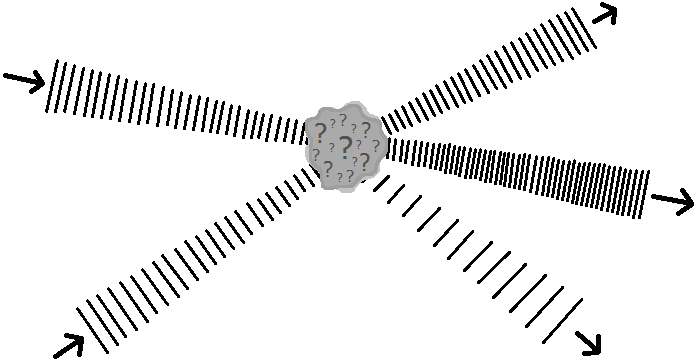 However, there's a more fundamental issue you must appreciate. When you add an interacting term $H_{\rm int}$ to your Hamiltonian, your simple free field Fock space states are no longer rightfully able to be called the "particle states." This occurs in standard QM as well: if you add an interaction term to your Hamiltonian, not only will the energy spectrum of your Hamiltonian change, but the energy eigenstates themselves will change. One must carefully ask what the particle states are in an interacting theory. This is considered for instance in this answer here.

Not the answer you're looking for? Browse other questions tagged quantum-field-theory hilbert-space harmonic-oscillator fourier-transform second-quantization or ask your own question.

25
Scattering, Perturbation and asymptotic states in LSZ reduction formula
3
What is the role of wave packets in LSZ formulae?

7
Formalism Of Quantum Field Theory vs Quantum Mechanics
5
How to interpret the field configuration in quantum field theory?
3
Time evolution of 2-particle states in QFT in the Heisenberg picture
2
Can two bosons be called identical although their momenta are different?
0
What is more fundamental: Fock space or Hilbert space? And why?
4
Individual particle states in Fock space
2
Quantum linear optics Boson sampling
1
Physical Interpretation of Field Operator in Quantum Field Theory and Mode Expansion