How can I understand a Vortex Tube and its efficiency?

A Vortex Tube takes a pressurized input stream, most typically of a gas, and creates two output streams with a temperature differential. Apparently, it has been described as a Maxwell's Demon.

Both linked sources are scarce with information about how and why this works. Now, I have two questions:

I have performed few tests with Vortex tube to find its efficiency comparing with a refrigeration system.objective was to determine whether we can use compressed air or CO2 to replace refrigeration system.vortex tube works only with pressurised fluid.when sudden drop on pressure reduces temperature and the spiral form separator inside the vortex tube which circulates the fluid around it causing it to separate hot fluid and cold and directs it to 2 different direction.using cold air which got separated. I could cool water up to .5 degree in c scale.but it require high flow rate and pressure to drops down any further.

Why does it work? One needs to understand static gas temperature, total gas temperature and propulsion if a proper physical picture of the effect is to be constructed. This is an article by me and co-authors that explains the fundamental law of rotational cooling (also known as Euler's turbine equation), it assumes a sophomore-level math and physics:

Also, see this web site, I am putting together an easy-to-read explanation of the vortex tube effect
https://sites.google.com/site/vortextubeeffect

Consider the concept of vortex flow "discretization": let's simplify the vortex flow by introducing a simple flow system, which still exhibits the physics of temperature separation. The simple flow system comprises a rotating adiabatic duct and a tank of compressed gas attached to the inlet of the duct. The outlet of the duct is at $r=0$, while the inlet is at $r=R$, the point $0$ is the rotation center.

Temperature separation is observed in a rectilinearly moving system as well. Consider an elemental system, comprising an adiabatic duct and a tank of compressed gas attached to the leading end of the duct. Set the system with uniform linear velocity $c$. Let gas leave the system with velocity $0$ in the stationary frame of reference, the gas comes out the trailing end of the duct.

The temperature separations $\Delta T$ and $\Delta T_s$ are exactly the same as in the rotation case; only now conservation of enthalpy needs to be applied to solve for the temperatures.

To sum up, the vortex tube phenomenon is an example of Euler's turbine equation at work.

When it comes to the vortex tube effect, this analysis is a very good place to start.

I hope this helped!

The input stream does not only have a thermal energy - it also has a mechanical one. Mechanical energy can be used for work, and the gas temperature is easily changed by work - in adiabatic processes it rises when gas is pressed, and falls when gas is able to expand. This gives a general idea why this tube could work and at the same time not be a Maxwell's Demon. Though detailed picture can be very complex and ask for advanced understanding of gas dynamics.

If we calculate total thermal and mechanical energies of both output streams, we would find that some mechanical energy is lost, and total entropy has risen. Mixing those streams back in one would give us a slower and somewhat hotter gas than it was initially. This is the same effect as simple slowing down the stream on some obstacles.

Gas temperatures rise with compression and fall with decompression. The outer layers of the vortex the is compressing the gas (heat) due to centrifugal force. The center of the vortex has a low pressure comparitavely. (Cool).

Here is a paper in which the authors compare two open-cycle refrigeration systems: the bell-coleman cycle and the vortex tube, and calculate coefficients of performance for both. along with Nemu Rozario's work, I think this might answer the OP's questions.

see this in SlideShare on-line:

This research paper on "The Maximum COP of Vortex Tubes" provides a very clear and thorough explanation.

The introduction explains the vortex tube as an Angular Propulsion Engine and further goes on to derive the maximum theoretical efficiency based on this. 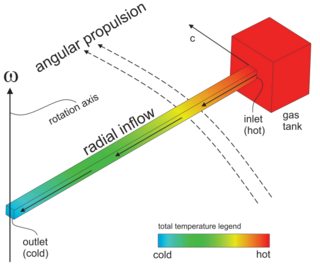 Section 4 on page 4 lists the theoretical maximum efficiency for a vortex tube using air to be 42%. It then sites reference #3 for empirical efficiency valves that consider friction and other inefficiencies (M. O. Hamdan, A. Alawar, E. Elnajjar and W. Siddique. “Feasibility of Vortex Tube Air-Conditioning System”, Proc. ASME, AJTEC2011, (2011).)

The published empirical efficiency for a vortex tube is between 3% to 5%.

Not the answer you're looking for? Browse other questions tagged thermodynamics fluid-dynamics angular-momentum vortex or ask your own question.

1
May I know how a vortex tube works?
-1
Name of this type of cooling system?

4
Energy formula for separating $O_2$ from mixture of $O_2$, $NH_3$ and $H_2O$
2
How do I calculate the energy balance of a trompe?
0
Carnot Engine Work from Heat Exchanger between Two Gas Streams
0
Adiabatic cooling in a closed system
5
Maxwell demon with memory storage
1
Formula for the heat input in a heat engine
1
Wouldn't Maxwell's demon violate the first law of thermodynamics and if so, is Landauer's principle even needed in this case?
0
Total heat taken in?
0
Landauer's Extended Principle