How space regains its neutral shape in the absence of massive objects?

As space bends, stretches, and warps when there are massive objects in the vicinity. Which means there will be no warping or bending in space when there's no mass.

I am talking about keeping the space-time fabric analogy in mind.

Is there any force that helps space to regain its original neutral shape?

general-relativity spacetime curvature
Share
Improve this question
edited May 14, 2021 at 11:13

In general relativity the curvature of spacetime is described by something called the metric tensor, $g_{ij}$, which describes how distances work at each point. The field equations tell how it changes from point to point.

When there is matter around it produces curvature, but the field equations also describe how this curvature spreads out in space outside the matter. This is because the equations are second order differential equations: the curvature cannot just stop at the surface of the matter even if the surface is sharp, but instead change smoothly in a way that obeys the equations (producing what we normally call gravitational fields). It turns out that the influence of matter declines with distance, so you could say that when you move away in space spacetime regains its less curved shape.

There is a wrinkle here: gravitational waves. There are solutions of the vacuum equations that describe ripples in spacetime that do not correspond to any mass present. So even infinitely far away from masses you could in principle encounter such waves that make spacetime curve a bit. Just like normal mass-induced curvature actual gravitational waves from merging black holes and similar events get weaker the further they travel (but the amplitude goes down as $1/r$ rather than the $1/r^2$ for gravitation).

So far I have described this in terms of reduced influence in space, but relativity theory doesn't regard space or time as different (there is a thing about the time component having a different sign in the metric tensor from the space ones, but let's ignore it). That means that the previous arguments also apply if you were to remove material objects (or yourself) from a place: their gravitational influence and waves would decline, and since one second is equivalent to $\sim 300,000$ kilometres this would be relatively fast unless we speak about very heavy objects with vast radii of gravitational influence.

But what is the "force" smoothing things? The feedback is basically geometrical: if things curve in one way in one direction the relations described by the vacuum equations will make them curve the opposite way in another direction (technically/informally, a zero Ricci tensor $R_{ij}=0$ means that the metric is a harmonic function $\Delta [g_{ij}]=0$). The typical "strength" of this (setting a distance scale) is set by the gravitational constant and the units we measure things in.

In order to formulate the theory at all it must be assumed that when a gravitating mass recedes from a region of spacetime the curvature diminishes again.

The equations don't have an explicit term for this elastic property, but the framework as a whole does have that property.


There is a note by Kirk T. McDonald, Princeton university, discussing the Young modulus of elasticity of spacetime. The title of the note is: What is the stiffness of spacetime?

McDonald arrives at a number for Young's modulus of elasticity, of spacetime, that is in the order of $10^{20}$ times larger than that of steel.


McDonald mentions that his note was triggered by the response by Kip Thorne (during the question time after a lecture) to an audience question about the modulus of elasticity of spacetime. This response is at 1:21:20 of the Kip Thorne Lecture

Now answering your question of why it remains flat in absence of massive objects, you need to go to the fundamental postulates of the theory, physical laws are invariant in inertial frames, and the speed of light in a vacuum is the same for all observers. These are postulates, which we accept as true, and taking these as the basis of the theory we can verify them and they work. Now both of these postulates result in describing the spacetime as flat (Minkowski space) in this "special case".

Regarding your question that is there any force that helps regain the spacetime fabric its neutral shape when the mass is displaced, I want to point out that yes, there is a force. Its gravitational force only, but since gravitational force is seen as a result of the curvature of spacetime (Einstein's field equations), it's hard to visualize. Anyways, when the mass is displaced to some other place, the earlier place curvature goes back to its neutral shape since the stress-energy tensor changes, which is the source of this curvature. You can see this through Einstein's field equation, shown in the figure below. You can go through the answers: How exactly does curved space-time describe the force of gravity? 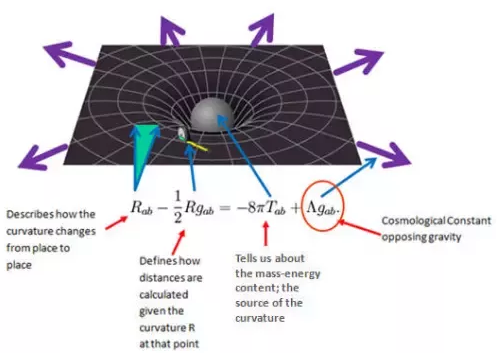 If you want to read more about how Minkowski spacetime is visualized, you can go through this paper: A Survey of Visualization Methods for Special Relativity.

Nobody knows how this accomplished. Of course, you can say that in the absence of mass (or better, stress-energy) there is no curvature of spacetime, but this doesn't explain how the stress-energy tensor conveys its information to spacetime (so that it becomes curved). If someone knows how the information is given to the spacetime (rather than stating that the presence of a stress-energy just goes along with curvature) can step forward, she would find herself in a huge spotlight soon (in the world of physicists).

Not the answer you're looking for? Browse other questions tagged general-relativity spacetime curvature or ask your own question.

73
How exactly does curved space-time describe the force of gravity?

73
How exactly does curved space-time describe the force of gravity?
19
Better explanation of the common general relativity illustration (stretched sheet of fabric)
12
Could dark matter be curved pockets of spacetime left over from the big bang?
1
Bending light due to gravity
1
Bending of space and time