When does a photon become part of a moving system? [closed]

I was wondering when a photon becomes part of a moving system. Does it need to be generated inside e.g a moving train? Or can it be a photon generated out-side the train but reflected by mirrors that are attached to the train body? 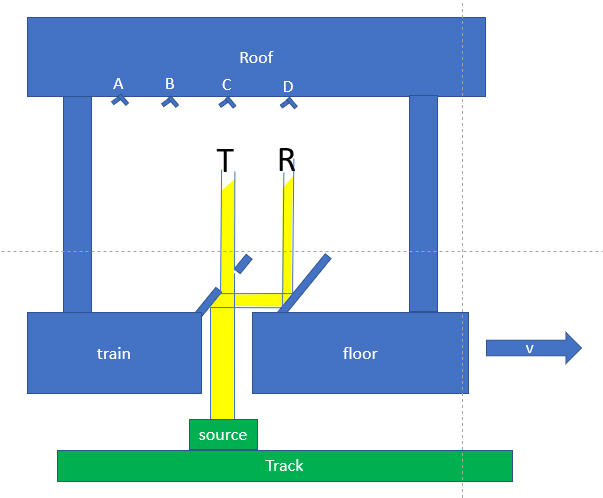 "Part of a system" is a question about how someone analyses something by drawing boxes around separate components, rather than about what is actually there.

Both can be reasonable ways to analyze things, if you're careful.

Time dilation (and length contraction) isn't a property of a system. It's a property of an observer's perspective on two "events". These can be the reflection (absorption and reëmission) of a photon in a light clock, but where the photon came from truly doesn't matter. (Though arranging for a photon to be captured from outside a light clock and kept in the right path to remain in it is incredibly difficult.)

If it helps, think of the light as it's own "system", rather than as a part of either the train proper. But the important bit is the events, and those will be the same whatever the photon source.

Not the answer you're looking for? Browse other questions tagged special-relativity reference-frames thought-experiment or ask your own question.

28
How does a photon experience space and time?
23
Time dilation clock experiment: what would happen if the clock were flipped 90 degrees?
1
Experimentally verifying some facts
1
Einstein light clock with mirrors but what if mirrors outside the train?
4
A light clock with a retroreflector instead of a mirror