If all raindrops were small transparent ice cubes how would the rainbow look like?

Suppose all raindrops were small transparent cubes. Would this alter the looks of a rainbow? I mean would it still be visible at all, and if so, would it still have the same shape?
Or will all cubes just let light pass as if they were not present? I mean, all sides are flat, so the light waves are not dispersed after entering and exiting (the light is transmitted straight through the cubes or reflected as in a mirror).
If the cubes can't do the job of transforming the rainbow, are there (symmetric or non-symmetric) forms thinkable for the icecubes so that they give a different form than the normal rainbow? Symmetric (hexagon formed) ice crystals are already mentioned, but these are one-dimensional. The effects they produce include a wide variety of effects (see the links below). What kind of small transparent ice cubes can I throw from the sky to make a new kind of rainbow appear?

As @rob pointed out some real life examples are to be found here. The examples involve water droplets as well as ice crystals. @Ruslan gave a link to snow dogs, also an effect due to ice crystals in the atmosphere. There is already a great variety to be seen. To say the least. All effects are in a way similar to a circular rainbow (except the sun dogs). Will all collections of small and equal pieces of transparant ice (or, say, diamond dust blown into the air, if affordable) produce circular patterns? Will all these collections produce the same dispersion of colors as seen in a rainbow? It's a bit a running of of the mind question, but nevertheless... I'm really interested what would be seen if diamond dust were blown in the wind on a crisp an claer sunny day.

As Andrew explains, you will get halo effects rather than rainbows. There may be some colour but it is likely not very visible.

This case may almost happen on Mars, since CO$_2$ crystals have cubical symmetry. Unfortunately the most likely crystals are cuboctahedra, octahedra and other shapes. Still, it is possible to simulate the halos they generate.

On Earth, the rare form of water Ice I$_c$ with cubic symmetry (but octahedral crystals) has been attributed as the source of the rare 28 degree Scheiner's halo. 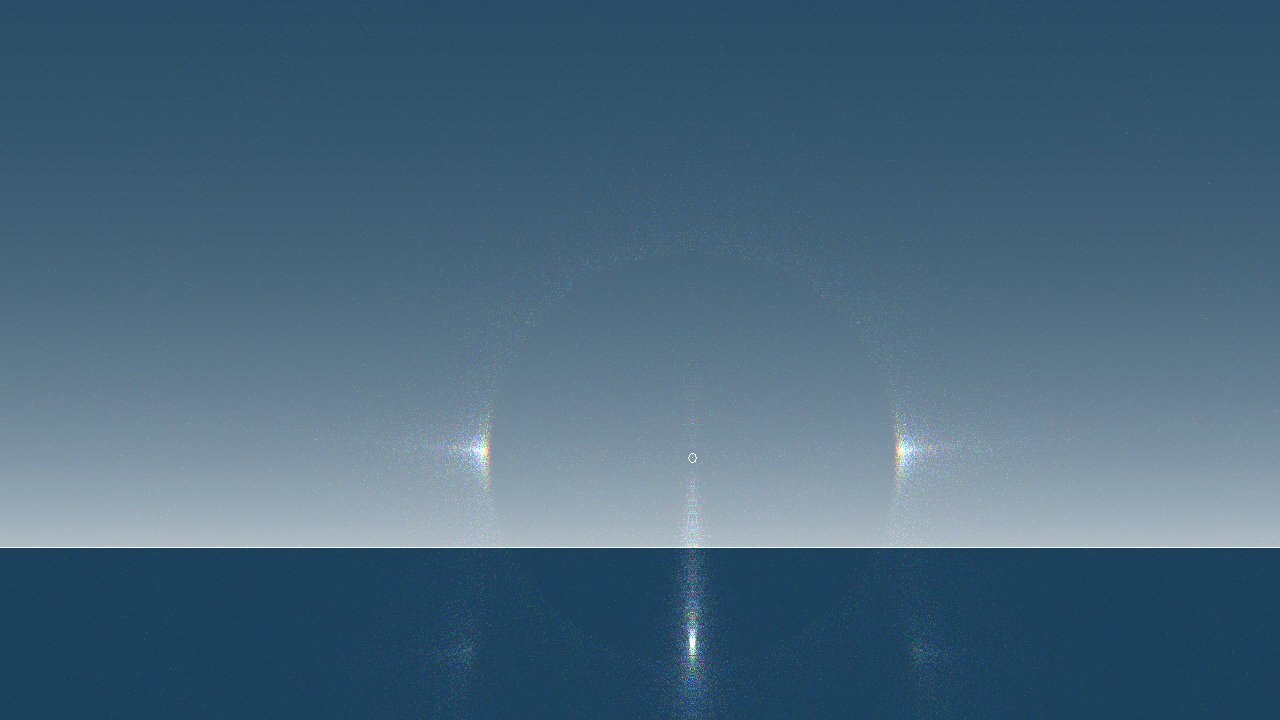 A simulation of true cubical crystals in random orientations done using HaloSim shows that it produces a halo with two prominent sundogs and a pillar. I am not entirely certain that falling cubes will be randomly oriented; changing the angular distribution seems to encourage a parhelic circle.

An interesting question is what happens if you spray salt crystals in the air.

This answer is based on general knowledge of physics and of some atmospheric phenomena, rather than specific calculations for the cube.

The first point to say is that most shapes, including cubes, do offer prisms to light passing through. For example, consider a light ray entering one face and exiting an adjacent face. So there will be a net refraction for many of the rays. It follows that a group of cubes falling in the air will offer some sort of rainbow-like effect.

The next point is that one should consider three cases: (1) cubes all in the same orientation and somehow maintaining that orientation; (2) cubes all the same way up but each rotating about a given direction, say the vertical axis through their center of mass; (3) tumbling cubes. In the case of atmospheric phenomena, cases (2) and (3) can occur with falling ice crystals, and they give rise to halos around the sun. These halos are at smaller angles than the standard rainbow, so they appear closer to the sun, and often they are not so clearly coloured, but there is some colouring. Colourful effects around the moon at night can also be caused by falling ice crystals.

Ice crystals have hexagonal not cubic symmetry, but one would expect similar effects for cubes; only the details will be different such as the angles and therefore the observed size of the halo.

To get a halo it is not enough merely to have refraction. It requires a way to emphasize one angle of refraction over others. For the ordinary rainbow this occurs at a stationary point in the relationship between outgoing and incoming direction of the light passing through. But I think it is true that all prism shapes have such a stationary point, so a halo can be produced. As the observer looks at the sky they are observing a range of output angles, and there is more light at the preferred output angle which occurs at the stationary point. The result is an appearance which looks like a glowing ring, which is called a halo. If the preferred angle is itself a function of wavelength, which it will be for materials such as water, then the halo has different sizes for different wavelengths, and therefore appears coloured like a rainbow. However the colouring is less distinct when the stationary point is broad (a small value for the second derivative of $\theta_{\rm out}$ as a function of $\theta_{\rm in}$). The ordinary rainbow is unusual in this respect, having a more distinct colouring owing to a sharper function.

Not the answer you're looking for? Browse other questions tagged optics visible-light refraction or ask your own question.

5
How would one generate Brownian light? What would it look like?
14
Which of these theories on why light slows in media are true?
9
Rainbow in cloud near Sun
0
What was the rainbow like object I saw in ice crystals this morning?
23
What do individual rainbow-forming droplets look like?
1
What would it look like if the speed of light in vacuum were to decrease?
0
How would a rainbow from a divergent light source look like?