It is a very simple problem. a massless rope but with friction is climbed upon by a monkey. I need to understand the working of forces here. 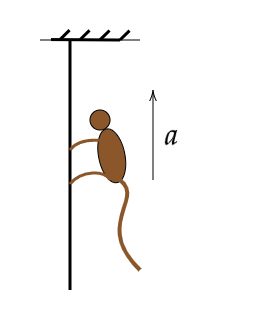 Suppose the monkey is applying a force F on the rope. So it in return feels the reaction force F towards the ceiling. Tension also develops here in the rope as well due to the force F and it is equal to F.

Now we know that the rope will pull the monkey up with tension force. so the monkey feels F upwards. But the monkey at the beginning also experiencing force F from the 3rd law reaction. So is it that the monkey applying a force of F downward will feel a force 2F upwards in return.

Now bringing friction into the play. When the monkey pulls down the friction pulls up.Let the friction be f. now the rope also feels a force of f. It means that the final tension should increase and become F+f. So the monkey will now feel an upward tension of F+f.

So eventually we have a monkey applying a force of F on a rope and getting 2F+f force in return.(one F from 3rd law reaction when it applied a force F in the first place. Another F+f from the tension in the rope.

So where am I wrong here ?

You need to organize the forces acting on each body, and which is the source of them.

Monkey: Gravity from Earth and friction from the rope.

Rope: Friction from the monkey and an upward force from the ceiling.

The rope is at rest, so the forces are equal on it. The monkey acceleration depends on the difference of forces on it.

Not the answer you're looking for? Browse other questions tagged newtonian-mechanics forces friction free-body-diagram string or ask your own question.

9
Understanding tension
1
How does friction and mass of the string influence the tension force?
1
How did tension developed in a string when two equal and opposite forces are applied on the same body?
1
Forces and motion (Newtonian)
16
Is there a general rule for determining the direction of tension force?
0
Trouble with tension
1
Monkey and Banana problem
1
Can you determine an action reaction pair when tension acts on a string attached to a pulley?
0
Newton's 3rd law and Tension