I have a set of concave/convex mirrors/lenses, and I have drawn out all of the ray tracing diagrams for each possible combination and type of image each optical element can produce.

When I look at the ray tracing diagrams then reproduce the situation in the real world with myself as the "object", all the scenarios make sense to me except one: when I as the object stand beyond the focal point of a concave mirror. 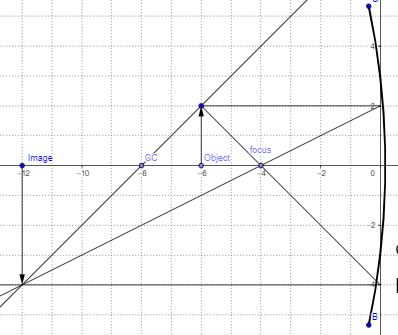 The image ends up as "real" and appears to be in front of the mirror. Now I understand that in the situation above, I as the object would stand at 6m and this would result in the image appearing at 12m. So if I placed a wall or screen at the 12m mark, the image would form on that surface (just like a movie theater screen).... at least I think I interpreted that correctly.

It's really frustrating because every other possible arrangement of optical elements makes total sense to me, except this one. Any suggestions on how to think about it? Thank you for your time!

optics reflection geometric-optics
Share
Improve this question
edited May 12, 2021 at 17:03

A good place to start is a flat mirror. What happens if you draw rays like in the image you have posted? You will not find all of the rays converging to a single point, even though you can certainly see something when you look in the mirror. As you mentioned before, we can think of putting a screen at the "image location", but for a flat mirror there is no such place; you could not form an image on a screen. What is going on? Why can you see something from a mirror if there is no image location?

Well, your eyes are lenses, and they form images on your retina. So while there is no image being formed at the location of your eye, the light can be focused to then form an image on your retina.

So, when we talk about real images being formed, we are not talking about the image one would see if their eyes were in that location. We are just talking about a place where light rays from an object converge after interacting with the mirror / lens. If you want to describe what you see through your eyes, you have to add in the additional lenses that make up your eyes.

0
Image in concave mirror even from side?

0
finding focal point of concave lens using concave and convex lenses
1
Is it possible to have a virtual image and real image at the same time using a concave mirror?
0
Why does a spoon form a virtual image though it is a concave mirror?
0
Image formation of object on itself by a system of a lens and a mirror
0
What is the proof that we can use virtual object to know the place of formation of image in case of convex/concave lens?
1
If a real image is formed at some distance from a concave mirror, how can we always see it, no matter where we are standing?