How are relativistic tidal forces different from their Newtonian counterparts?

However, from how I see it, they are not very different mathematically.

The Newtonian tidal equation is derived by making a Taylor expansion of the gravitational field.

The relativistic one uses the geodesic deviation equation and the Riemann curvature tensor for the Schwarzschild metric.

They both seem to give the same result, even in regions that relativistic descriptions should seem to dominate, like near a black hole. For example, the calculation of the Roche limit of a black hole seems to be identical to that of a more Newtonian object like a star.

Am I missing something here? Am I being too liberal with the "$\approx$" sign? Perhaps there are regimes in which relativistic tidal effects are dramatically different from Newtonian? Or do they differ only conceptually, but in fact produce the same numbers?

general-relativity gravity tidal-effect
Share
Improve this question
asked May 12, 2021 at 15:32

In the weak-field limit, GR and Newton give the same result. You have only shown the radial component of the tidal tensor:

There are also two angular components:

which induces a volume-preserving squishing along with the radial stretching. Volume is preserved because the tidal tensor is traceless:

being the Hessian of the potential $U(r)$.

In GR, one starts with the Weyl curvature tensor, $C_{\mu\nu\sigma\lambda}$. The Newtonian tidal force along a geodesic is reproduced by

which is called the gravioelectric tensor.

The frame-dragging (and velocity dependent) part, unique to GR, is described by the graviomagnetic tensor:

Such things are hard to visualize, so the integral curves of the eigenvectors of these tensors are used. They are called tendex lines and vortex lines, respectively (see figure). 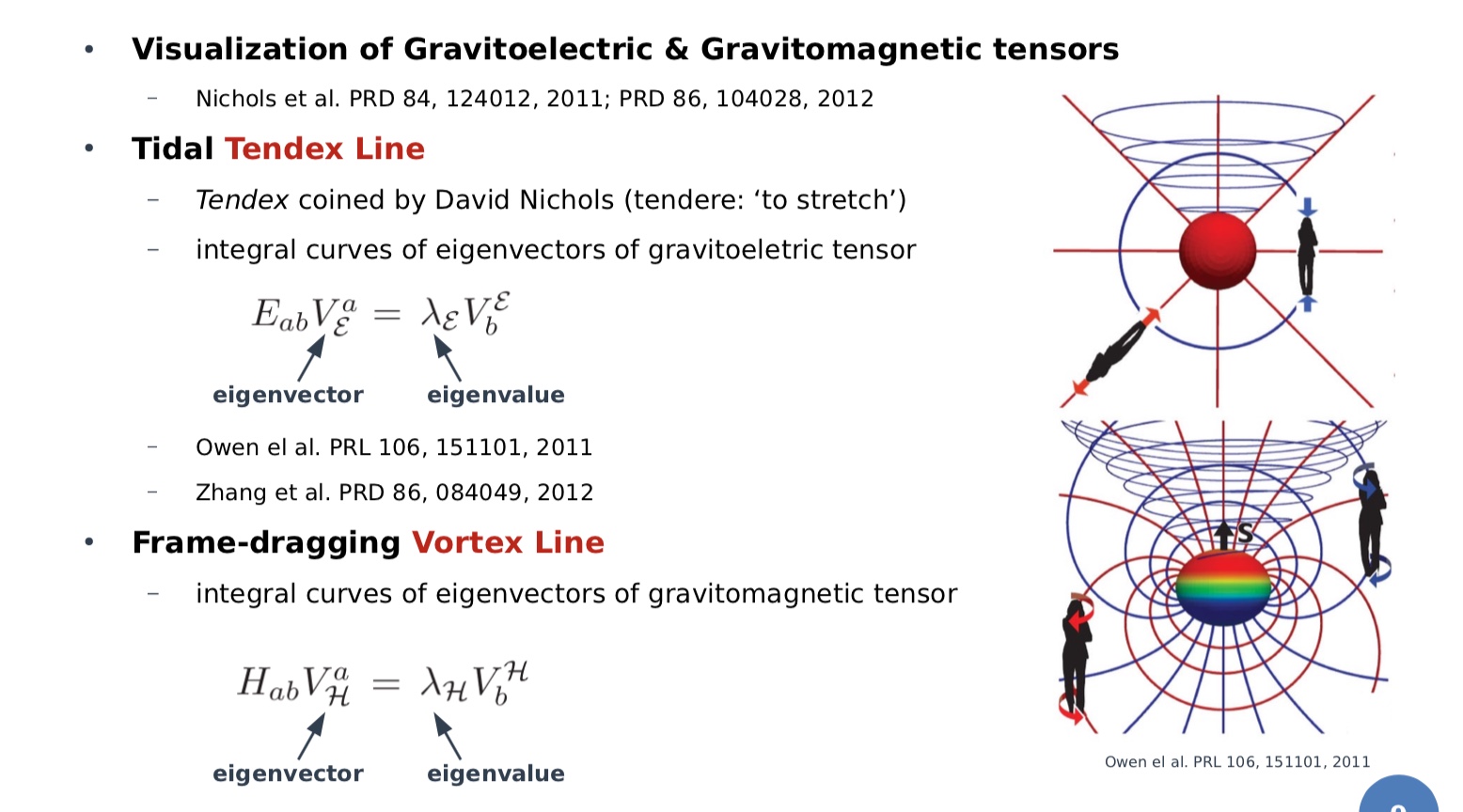 Not the answer you're looking for? Browse other questions tagged general-relativity gravity tidal-effect or ask your own question.

6
Tidal force when planets and smaller objects collide
1
Homogeneous gravitational field and the geodesic deviation
2
How are tidal gravity and curvature related?
8
Silly doubt about tidal effects and Einstein Field Equations
5
Are black holes affected by tidal forces?
1
Can you explain tides in our water bodies with respect to Theory of General Relativity and spacetime curvature?