Rayleigh scattering and the sum of many sines of different phase?

Rayleigh scattering occurs when light is scattered by many randomly placed scatterers of a size smaller than the incident wave length. My textbook (Optics by Eugene Hecht) illustrates this as shown in the images labelled (b) and (c) on the left: 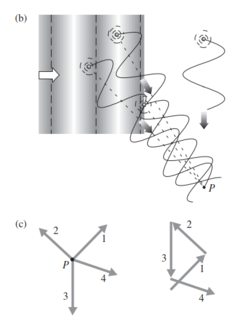 It is clear from the image that at any point P that is roughly lateral/perpendicular to the direction of propagation of the incident wave (assume its a monochromatic sinusoidal plane wave for simplicity), there will be many randomly oriented sinusoidal phasors of equal amplitude. Now the sum of N cosine waves of the same frequency but different phase is given by $$E=\sum^N_{i=1} E_{0i}\cos(\alpha_i\pm \omega t)\,\,\,\,where \,\,\, E=E_0\cos(\alpha \pm \omega t)$$ $$and\,\,\,\,E_0^2=\sum^N_{i=1}E^2_{0i}+2\sum^N_{i=1}\sum^N_{j>i}E_{0i}E_{0j}\cos(\alpha_i-\alpha_j)$$ If the phase differences ($\alpha_i-\alpha_j$) is a random number (which is the case for sparse randomly positioned scatterers) then the double sum on the left will average out to zero and we will be left with $E^2_0=NE_{01}^2$ if we assume equal amplitudes. This makes sense and explains why in the case of random and widely spaced scatterers, there will be an appreciable amount of light scattered laterally. My issue is that the image labelled (c) above does not seem to agree with this result. The image suggests that the resulting amplitude (the tip to tail sum of each phasor) should stay small and should on average never really be more than that of any one of its single components. Yet my math suggests it should be $\sqrt{N}$ times that of its components.

In line with this discrepancy, when optical light travels within a dense, homogeneous medium (a perfect transparent crystal perhaps), at any point P that is roughly perpendicular/lateral to the direction of propagation of the incident wave, the resultant wave will be an addition of many sinusoidal phasors of equal amplitude and frequency but only slightly different phase because of the many closely spaced and ordered scatterers. This is illustrated in the images above on the right labeled (a) and (b). I am then told to be believe that this should lead to a cancellation of all the laterally scattered light and is the reason light only/mostly travels forward within a transparent substance like quartz or glass. My problem is that the image labelled (b) would suggest that the result phasor should once again on average add up to a phasor that is non-zero (on average the phasor should have an amplitude equal to the radius of the circle in the image labelled (b)) which indicates that their should be atleast some lateral scattering. As for the maths, I am not sure how to apply the equations above to get an answer for the sum of N cosine waves of slightly different phase.

If you assume a (near) homogeneous medium (i,e. distance between scatterers << wavelength) there will always be two particles for which the radiation interferes destructively in directions other than the forward direction (see https://www.physics.purdue.edu/webapps/index.php/course_document/index/phys322/1871/25/16965 for details). This is similar to the specular reflection you get from a surface when the latter is smoothly polished, and similar to the fact that for diffraction grating you only obtain the central maximum if the slits are closer than one wavelength (see http://hyperphysics.phy-astr.gsu.edu/hbase/phyopt/grating.html )

To observe proper Rayleigh scattering you need a medium with randomly distributed atoms/molecules that are (on average) more than one wavelength apart. Otherwise scattering effects all but disappear and you have refraction instead.

0
Electromagnetic wave propagation through two lossless dielectrics
1
What justifies adding phasors' vertical components
1
Why do we add intensities for coherent sound sources?
0
Amplitude of E-M wave (e.g. laser) in meters?
4
How to explain the relationship between wave's amplitude and intensity?
0
Phase Shift of Light upon Reflection