Why does an elastic tape peel off neatly when stretched?

There is this video about a tape peeling trick trending on the internet.

If you have a tape sticking on a paper, it rips off the paper if you perpendicularly pull on the tape. But when you stretch the tape before doing so (and if the tape is elastic), it peels off nicely. I tried it, and it really works. You can also get the same effect by pulling and raising one end of the tape while tightly holding the rest of it.

I wonder why this works. How does stretching the tape prevent the paper from tearing off?

Mahadevan's group showed, in "Wrinkling of an elastic sheet under tension," Nature (2002), and "Geometry and physics of wrinkling," PRL (2003), that the wrinkles arise from the inability of the film to undergo Poisson contraction at its ends, near the rigid supports (in the tape video, the hands). This constraint produces a stress state that shears the film into wrinkles with predicted wavelength $\lambda=(tL)^{1/2}\varepsilon^{-1/4}$, where $t$ is the thickness, $L$ is the length, and $\varepsilon$ is the applied axial strain.

Let's now consider the difference between peeling the film before and after implementing this wrinkled state. It appears that the level of tape-paper adhesion needs to be intermediate for the trick to be effective; if the adhesion is low, then peeling is effective, whereas if the adhesion is high, then the paper would be pulled off by the out-of-plane wrinkling deformation.

We appear to have a state where (1) some parts of the paper stochastically stick strongly to the tape and (2) the paper cohesion is similar to the paper-box adhesion, so that pulling at a small point can expand to a triangle of ripped and delaminated paper. In addition, (3) shearing the interface detaches the tape effectively. 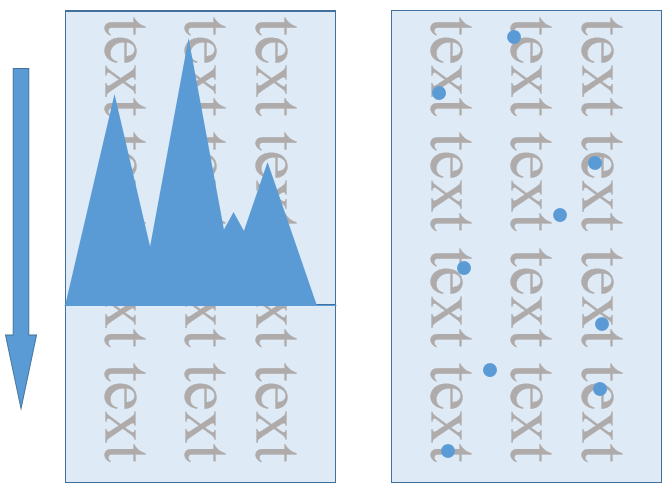 I would expect this trick to fail if the adhesion is strong enough that shearing becomes ineffective in separating the interfaces cleanly.

When you pull perpendicular the force of the tape's adhesive is sronger than the cohesion force of the paper, and the paper delaminates.

I was a bit late to post my answer and seems like @Cleonis has already posted one along the same lines as mine. FWIW, I will post this as a summary then.

You are essentially asking why the tape tears off the paper when pulled vertically but not when pulled horizontally.

Let's view this from the viewpoint of a molecule of paper. When you pull on the tape, you apply a force to the paper molecule. Whether the paper tears or not depends on how strong your pull is and how hard the molecule holds on to the surrounding molecules. In a planar sheet of paper, there are many more molecules holding on to you along the plane of the paper than above or below it.

Consequently, a force perpendicular to the plane of paper can rip it off easier than one parallel to it.

So, in short, when you pull on the tape vertically, the glue on the tape rips off the paper as there is nothing much holding the paper back. When you pull it horizontally, the tape stretches out and tries to take the paper along with it. But since the paper has strong structural linkage in this direction, it refuses to go with the tape. As a result, the glue, which is sandwiched in between the tape and paper, has no other option than to let go of one of the surfaces (the one with lower adhesion). This results in the tape neatly detaching from the paper surface.

Not the answer you're looking for? Browse other questions tagged forces everyday-life adhesion or ask your own question.

39
Where does the light go when I turn off the light switch?
21
Why does sand stick to my shoes?
2
Why can we tear a newspaper neatly one way but not the other way?
110
Why does a sticker slowly peel off, but if it is pulled quickly it tears?
0
Why does molten wax stick to surfaces when it soldifies?
83
Why does a rubber band become a lighter color when stretched?
0
Why does glue solidifies when taken out of the container?
0
Electric swatter working when it is off
21
Why does the tip of an elastic water tube flap when the flow is fast?