How does the pressure at point A in the tube change when the tube is accelerated horizontally?

My teacher asked me to solve this question : 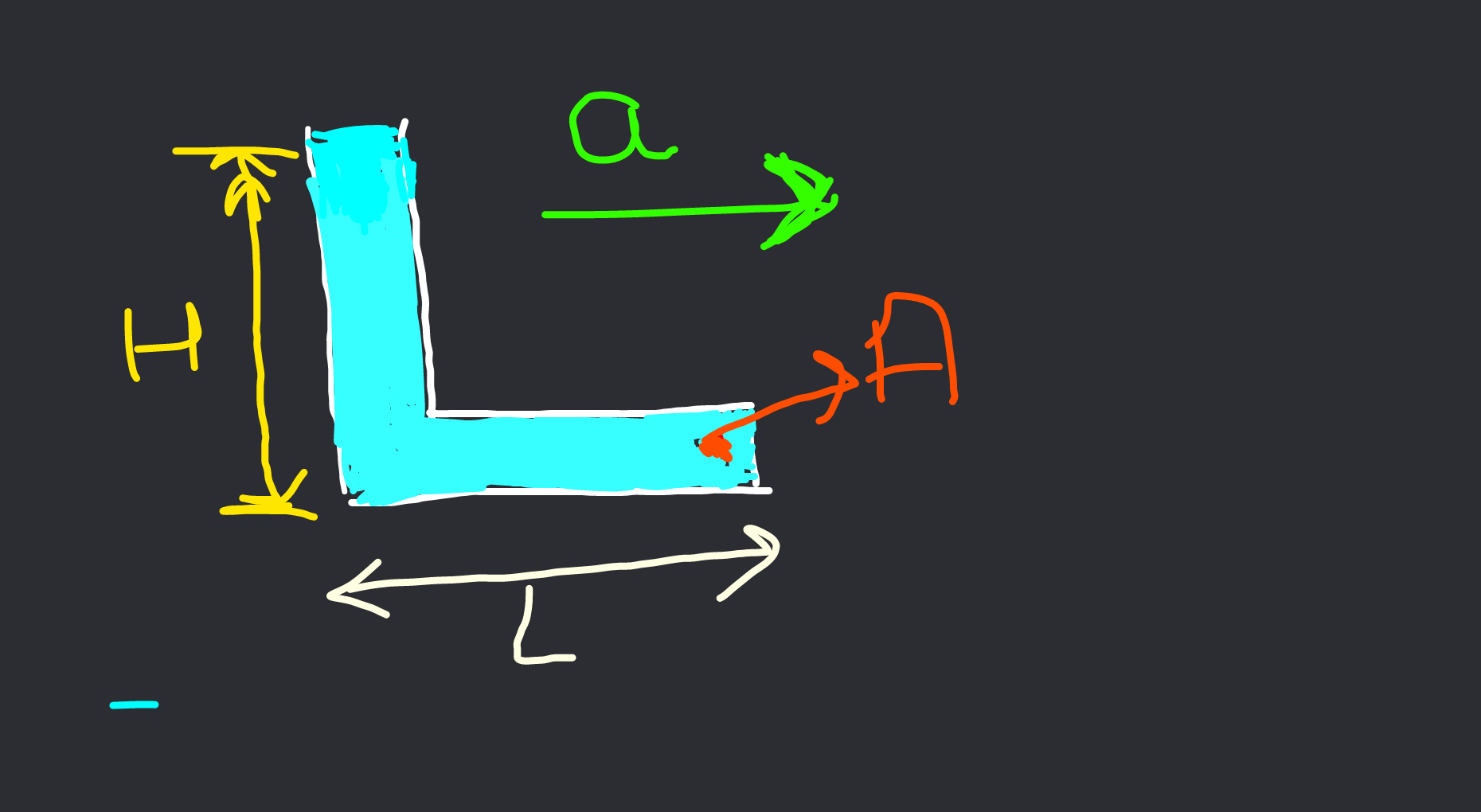 So we did some calculations and got the answer as $$a =\frac{g H}{L}$$ (where g is the acceleration due to gravity.)

Now a student asked that

shouldn't the height of the liquid in the vertical column change because of the acceleration (a genuine question).

(when the tube was at rest) to $$P_A=P_{atm}$$ because the liquid had tendency to move away from point A.

This was something I didn't get. How can tendency of shifting away alone, change the pressure at point A ? Shouldn't the liquid at A move away from it in order to decrease the pressure there ?

We know that pressure inside an accelerated fluid decreases in the direction of acceleration and is given by $$dp = \rho *a*dl$$ .

Using this fact we can find the acceleration of the tube as :

Also note that the required pressure at the bottom right end is $P_{atm}$.

homework-and-exercises fluid-dynamics pressure acceleration
Share
Improve this question
edited May 14 at 16:12
Ankit
asked May 11 at 7:11

I think the word tendency is tripping you up, precisely because it is quite a vague word to use in this context. It would be more helpful to have specific terminology with regards to the physics of the problem.

When your teacher talks about the "tendency" for the liquid to move away from point $A$, he is likely referring to the fictitious force in the frame of reference accelerating rightwards. In this frame, the tube is stationary. It experiences a gravitational field $g$ vertically downwards, but also a fictitious force field leftwards $\mathbf{a}$. This is the same force you feel when an elevator starts moving upwards, or when you're in a car going around a bend. You feel a tendency to move in the opposite direction of the acceleration of your frame.

We've established that the water in the tube has a tendency to move away from point $A$ because it experiences a fictitious force in the leftward direction. Now, this fictitious force field $\mathbf{a}$ is directly responsible for decreasing the pressure at point $A$, because the force creates a pressure gradient throughout the water!

Because the region directly below the opening must remain at $P_{atm}+\rho gH$, the pressure gradient actually acts to relieve the pressure acting on point $A$.

Another way to think of this problem is to sum up the fictitious field with the gravitational field. This redefines the direction of "down" in the system. 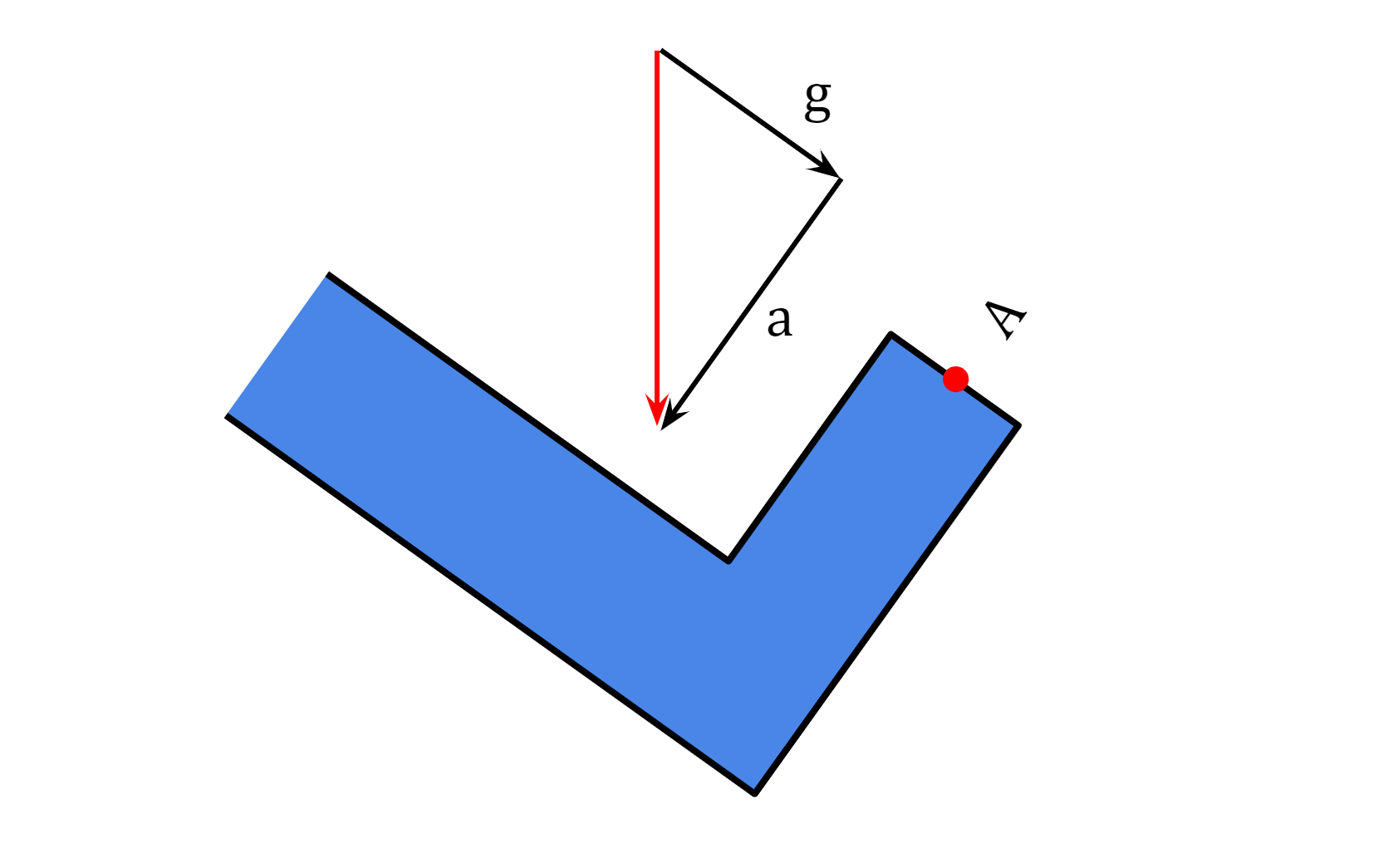 The amount of acceleration $\mathbf{a}$ determines the extent of rotation of the direction of "down". Since the apparent gravity is tilted, it decreases the pressure at $A$. When $A$ is horizontal with the opening, it means that their pressures must be equal.

The acceleration of the system will produce a horizontal “pseudo gravity”. You want the outer ends of each tube to be at the same “level” in the resultant field. With θ measured from the vertical tube to the line joining the two outer ends, tan(θ) = L/H = g/a.

Okay,so i believe when it will accelerate to right,there will pressure gradient built up inside horizontal tube.Im neglecting radiuses of tubes in order to simplificate.Pressure gradient inside accelerating fluids are equal to -rho * acceleration.Plus you have hydrostatic pressure gradient which is -rho * g.Lets take just horizontal part and treat it like both ends are closed.You have rho * g * H pressure everywhere inside.When it will start to accelerate,there will be pressure drop at right end and increase at left.Total pressure difference is dP=-rho * a * dx => deltaP=-rho * a * L.Pressure rise on left equal to drop on right.Pressure change that you need is rho * g * H which can be obtained by acceleration a=(2 * g * H)/L.

edit:I might be wrong with my assumptions.As right side is close due to conservation of mass liquid is not able to raise.So pressure on corner will be equal to rho * g * H all the time.Acceleration that is needed becomes a = g * H/L as you mentioned.

Before starting, the meaning of tendency needs to be clarified. I believe that by Tendency, your teacher means the obstructed motion of a body (or a fluid) under a force.

How can tendency of shifting away alone, change the pressure at point A ? Shouldn't the liquid at A move away from it in order to decrease the pressure there ?

There are many-many ways to understand this. One way is the way presented by your teacher. Another way presented in other answers is as follows:

Below, I would like to present another way to derive the result. I have found this method to be much helpful while pondering over your question.

We use only Newton’s laws of motion to derive the result. We take the ground as the frame of reference.

We choose a thin cylindrical part of the liquid with one end adjacent to the rightmost wall of the tube and another end directly at the end of vertical part of tube, and analyse the forces acting on it. 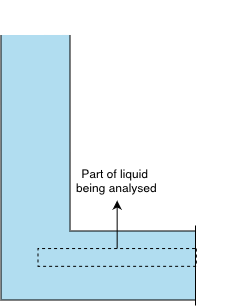 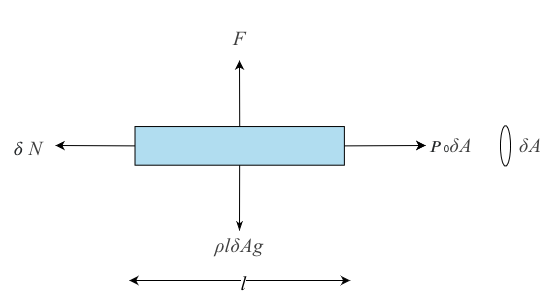 We take a small circular cross-section ($\delta A$) to ensure negligible change in pressure across height of cylinder.

Note: If the presented set of assumptions is not sufficient then please comment.

Will the level of the water rise? Strictly speaking, yes. Because the vertical tube is open on top, the acceleration to the right will cause the water to flow out (just as when you put the tube 90 degrees rotated in the gravity field). This influences the pressure distribution in the liquid (if you wait long enough there won't be any liquid left). So (strictly speaking), the classmate who said that the liquid level will rise was right, though I don't know what he/she meant by "the level". The surface doesn't stay horizontal when the tube is open. But I think (non-strickly spoken) it's clear what is meant in the exercise (it would be very difficult to take into consideration the fact that liquid will stream out). Maybe it's beat to consider a closed tube.
+

The pressure in the corner of the L-shape due to the resultant acceleration must be balanced, this implies

Which is the result you have obtained. If $H\gg r,$ where $r$ is the width of the tube, then the spillover can be neglected (your teacher has considered an idealised scenario). Also, your teacher has only considered the acceleration up to the point that $P_A\geq P_{at}$, if $P_A< P_{at}$ then water would be displaced from the tube by pressure from the atmosphere, making the problem more difficult.

As for your last point regarding the tendency, maybe an analogy would help. If you lie down and place a slab of concrete on your chest, the pressure you feel due to this will be $P=mg/A_{\text{slab}}$, where $A_\text{slab}$ is the area of the slab in contact with your chest. You can reduce the pressure you feel by applying a force $F$ opposite to that of gravity such that now $P=(mg-F)/A_\text{slab}$. For $F<mg$, the slab does not move from its position but the pressure has decreased due to the decreasing resultant force. Or even the initial acceleration you feel in an elevator, depending on whether you are going up or down, for a brief moment when the elevator accelerates, you feel heavier or lighter, which changes the pressure between your feet and the floor of the elevator. This happens even though you haven't moved relative to the elevator floor.

Not the answer you're looking for? Browse other questions tagged homework-and-exercises fluid-dynamics pressure acceleration or ask your own question.

0
Some confusions about Pascal's law
1
Bernoulli's equation: tube attached to a filled tank
4
Is Pascal's law incorrect?
1
Flow in parallel vertical pipes
4
Pressure variation in a capillary tube
0
Pressure at the opening of tube in Siphon
0
Pressure Variations in an Atomizer