I do not know a lot about physics. My goal is to express torque as a vector in 3d space. I know it is the cross-product of the radius vector and the force vector. My question is: if torque is the rotational analogue of force, how can the force applied be expressed as a vector?

Is it just a normal straight force vector and the only reason it leads to rotation is the constraint placed on the rotating object by the radius(as in if you pushed on it with a forward vector and the only reason it rotated would be because the radius(as in what connects the object to the center) kept it from going forward)? Or is it a vector tangent to the circle that updates as the circle rotates? Or something else entirely?

I'd like to start by stating the no the torque vector is not the rotational equivalent of a force. More specifically, we are talking about the moment of a force here. 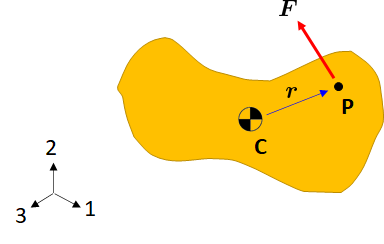 Next, consider a coordinate system that really describes a set of useful directions. I have named them 1,2,3 above.

This literally means how much of each quantity is along each direction.

It too has three components along the coordinate system.

I have also a more length post on the nature of the cross product in relation to moment-of type of quantities.

Now depending on the nature of the force (if it is external, or body riding) the direction of the force vector might change with time.

Gravity, for example, is along a constant direction only near the earth and can change directions when considering space applications. So is the force from a thruster as it follows the pose of the body.

40
Is torque as fundamental a concept as force?

1
What rotates a door : torque or centripetal force?
0
Expressing the magnitude of torque using dot product
1
Calculating the angle of tipping given force applied
0
How much torque needs to be applied?
10
Why do object rotate at all?
0
How Can I Understand The Resulting Movement of this Situation Using Cross Product Based on Geometry?