In microcanonical ensembles we have (for one particle in 1 dimension)

I am not convinced and believe that this integral diverges. Take for example a harmonic oscillator in one dimension, with $H(p,q)=p^2/2+q^2/2=E$ ($m=k=1$ for simplicity). One can write the above integral as

The integrand is $f(p,q)=\infty$ for all points $(p,q)$ with $H(p,q)=E$. Thus, one can think of $f(p,q)$ as a distribution with infinitely many (uncountably infinite) Dirac functions sprinkled around every point $(p,q)$ on the circle $H(p,q)=p^2/2+q^2/2=E$ (see figure). Each Dirac function will contribute 1 to the integral, but there are infinitely many of them on the circle so the integral will diverge. This argument is generalizable to higher dimensions.

I need help in clearing up my confusion as to why 1) this integral does not diverge and 2) it is proportional to $\Omega(E)$, i.e., the circumference of this circle. 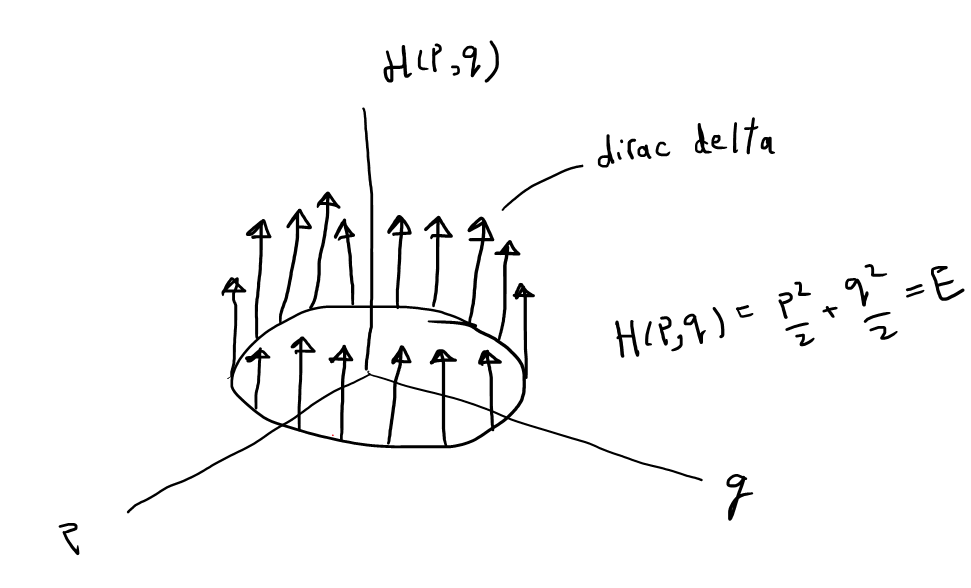 statistical-mechanics dirac-delta-distributions partition-function
Share
Improve this question
edited May 10 at 13:38

Thus, one can think of $f(p,q)$ as a distribution with infinitely many (uncountably infinite) Dirac functions sprinkled around every point $(p,q)$ on the circle

The hand-waving tale that the Dirac delta $\delta(x)$ equals "zero at $x\neq 0$ and infinity at $x=0$" is just that: a hand-waving tale. It is useful for building intuition in one dimension, but that's it.

In your integral, $$\int \delta(H(p,q)-E)dpdq,$$ the Dirac delta is being taken over a one dimensional space, and evaluated at the variable $\epsilon = H(p,q)-E$. If your analysis does not account for that, then it is wrong.

This is easier to handle for the specific example of the harmonic oscillator, where you're trying to calculate $$\mathrm{int}(E) = \iint \delta(\tfrac12(p^2+q^2)-E)dpdq.$$ This now has a Dirac delta evaluated over a one-dimensional energy variable which itself depends on a function of two separate integration variables $-$ which should look like quite a nightmare! To handle this, the thing to do is to make a suitable change of variables (in this case, to radial coordinates) that will separate the two. So, if we define $h=\tfrac12(p^2+q^2)$ and $\phi = \arctan(p/q)$ (so that $q=\sqrt{2h}\cos(\phi)$ and $p=\sqrt{2h}\sin(\phi)$, and $dp\,dq = dh\,d\phi$), which gives us $$\mathrm{int}(E) = \int_0^{2\pi}\int_0^\infty \delta(h-E)dh\,d\phi= \int_0^{2\pi}1 d\phi \times \int_0^\infty \delta(h-E)dh.$$ This separation shows what's really happening: the Dirac delta is indeed singular, and it is being integrated over one dimension to give a finite result. The other integration variable then gives the circumference of the ring of equal-energy states, which is what we want to calculate with $\Omega(E)$.

Not the answer you're looking for? Browse other questions tagged statistical-mechanics dirac-delta-distributions partition-function or ask your own question.