Why is distance taken to be perpendicular to the direction of force when calculating torque?

According to my textbook:

Moment of a force = force $\times$ perpendicular distance of the line of action of the force from the fulcrum.

I don't understand why it would be that way (especially what mathematics goes behind it). Why is distance taken to be perpendicular to the direction of force when calculating torque, regardless of its direction?

For example, in this question:

The answer (given by the marking scheme) is supposedly $240$ $\text{N}$ $\times 1.2$ $\text{m}$ or $288$ $\text{Nm}$. The way I usually tackle questions like these would be to resolve the vector into its components and multiply the magnitude of its vertical vector with the distance.

How does the method used above by the marking scheme work? Is there a proof which shows it does?

Therefore, you have that the magnitude of torque is $$\tau = F\underbrace{r \sin\theta}_\text{lever arm}$$

Now, because of trigonometry, you can see that $r\sin\theta$ is the $1.2 \ \rm m$ distance you highlighted. See below:

The best definition of torque is the work per unit angle of rotation that can be done by a force which is acting in a manner that would tend to cause a rotation. The work is to be done by the component of the force which is along the arc in the direction of motion. That component is perpendicular to the radius. For each small distance moved, the arc length is rθ. So the torque is $F_θ$(rθ)/θ = $F_θ$(r).

You want to calculate the torque about a point B due to a general force $\vec{F}$ passing through point A. Without loss of generality, decompose the force into three components ($F_1$, $F_2$, $F_3$) one of which is along the line AB.

Now treat the torque about B as the sum of the torques from the three components.

This means that $F_3$ has zero torque about AB, and the total torque at B is solely due to the perpendicular components $F_1$ and $F_2$.

Mathematically this is done using a cross product which ignores any parallel components.

Also, note that you can reverse the above construct and decompose the position vector $\vec{r}_{A/B}$ along three directions, one of which is parallel to the force $\vec{F}$. In the end the parallel component will be ignored and only the perpendicular distances survive to contribute to torque. This is a bit more difficult to visualize but entirely equivalent to the first case. 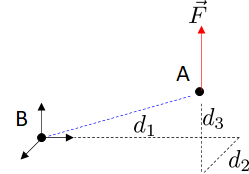 As a general rule a force vector can slide along its line of action without changing the problem at hand. In the figure above, slide the force down to meet the (1,2) plane to make the out-of-plane distance zero $d_3=0$.

It is this freedom to slide of (some) vectors that necessitate the use of perpendicular distances and cross products.

I have also posted a more general answer to the nature of torque that I recommend you read also.

41
Is torque as fundamental a concept as force?
22
Why does torque point perpendicular to direction of the motion?
8
Why is torque a cross product?

0
Direction of the torque
5
Deriving torque equation from Newton's 2nd Law
2
If direction of torque is upwards(or downwards), why does the body rotate perpendicular to the direction?
5
Is torque still a vector in 2 Dimensions?
0
Calculating the work done by a particle experiencing a force in polar coordinates
1
Why do two bodies affect each other with the same but opposite torque?
0
Is it possible to show that calculating the torque using the center of gravity results from an integral?
1
Calculating the angle of tipping given force applied
0
Why torque is defined to have a direction as the axis of rotation?