Kinematic behavior of a flat, a closed, an open universe 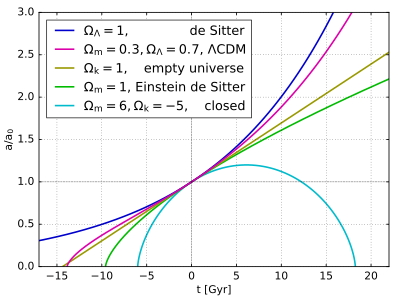 according to An Introduction to Modern Astrophysics, 1263p, there is explanation about evolution of scale factor.

what does it mean? i don’t know relationship between ‘kinematic behaviors’ and ‘early universe flat’ 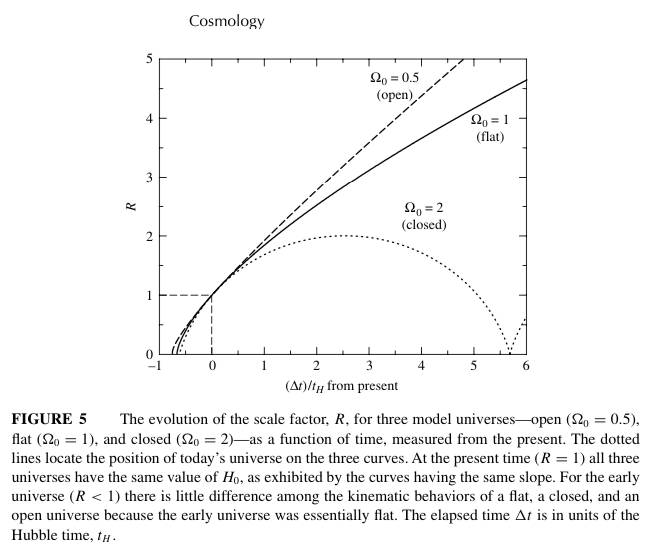 cosmology space-expansion universe
Share
Improve this question
edited May 11 at 19:39
빛나는밤
asked May 8 at 23:02

This answer is based on the Figure 5 you added to your question. I believe that the concept of "kinetic behavior" in this context means the mathematics of the expanding universe based on the cosmological model related to Figure 5. The "early flat universe" refers to the similarity between the three assumed models (open, flat and closed) in Figure 5 on the left side where R approaches zero. Note that near R = 0, both the open and closed models look very similar to the flat model.

Indeed somewhat confusing, because if the early universe were essentially flat, how can it develop in a closed, flat, or open universe? Won't it stay flat forever?

f you imagine the universe to be a balloon (reducing the number of space dimensions to two), it is said that for every model (closed, flat , or open) the developing balloons are identical in the early universe (around $T=1$). I'm not so sure what is meant by essentially flat means that the balloons locally don't differ from a flat spacetime (though their overall form is that of a balloon). This is also the case for the three types of universe in the distant future.
So while the balloons don't differ much from each other now, they will differ from each other in the future.

Not the answer you're looking for? Browse other questions tagged cosmology space-expansion universe or ask your own question.

4
Curvature, Omega, the Flatness problem, and the evolving shape of the universe
8
Can a closed universe become open?
7
Could the spatially flat universe start small?
0
Is cosmic inflation slow rather than fast
5
Where is the work done of adiabatically expanding universe going into?
0
Is there a theory which suggests a cyclic Universe with a decreasing density parameter?
1
Why does the character of the universe not change as it evolves?