What would a force position chart look like applied in real life? 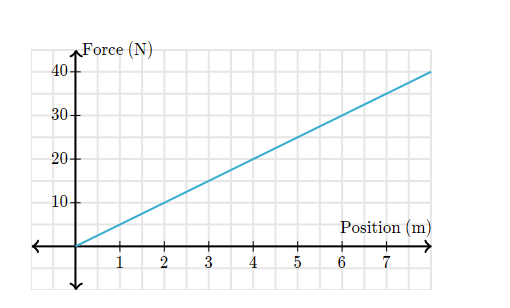 In the chart above, you can see the force (N) on the y axis and the horizontal position (m) on the x axis.

How would you visualize this in your head? I'm trying to imagine the movement of a 1 kg box, but I just can't. Does anyone have any method or tips on visualizing the movement of a box following this force position chart?

I'm trying to study physics and I can't get past this small thing which is supposedly super easy. I'm pulling my hair out on such a simple bit of physics! I would really appreciate any help I can get, even if it's just another question that would redirect me in the right path. I'm definitely doing something wrong here.

newtonian-mechanics work displacement
Share
Improve this question
edited May 8 at 22:16

You might be an intuitive thinker. You need an image, a film, in your head to properly understand and visualise the scenario. I have it the same way. You can visualise a scenario like this by finding a proper example. Eventually with training you will be able to make up an example and see the scenario before you on the spot.

Does anyone have any method or tips on visualizing the movement of a box following this force position chart?

Note that we do not know the movement, the motion, from this graph. You can elongate your spring fast or slow. It doesn't matter. You can elongate it to $3\,\mathrm m$ on the x-axis with a corresponding force on the y-axis, and then keep it there; maybe you tie the spring end to something so it just stays at this setup. In other words, where you are on this graph says nothing about the movement or motion.

When the axes do not involve speeds, accelerations or most importantly time, then you might not have enough info from the chart to determine a unique motion. The graph here just shows us the relationship between force and position of something, but says nothing about any motion parameters.

Not the answer you're looking for? Browse other questions tagged newtonian-mechanics work displacement or ask your own question.

1
Find force of friction on an object under influence of tension by another object
0
Support reaction on rotating object
3
How do I calculate a upward-pulling force on a swinging pendulum?
0
Describe the magnitude of a force using real-life comparisons instead of numbers
2
Friction causing acceleration?
1
High order derivatives and their impacts to a system