Why can't the Chinese rocket Long March 5B keep revolving around the Earth without re-entering?

The out-of-control part of the Chinese rocket Long March 5B is expected to re-enter the atmosphere of the earth and crash on the earth in a few hours. (Today is May 8th, 2021) At the moment, it is revolving around the earth in an elliptical orbit and completes a revolution in 90 minutes. Since April 29th, 2021 it has gone around the earth more than 100 times and the size of the orbit is getting smaller and smaller.

Why can't this rocket keep revolving around the earth until it is completely burnt in the atmosphere or hits the skyscrapers (in a path parallel to the earth surface and not perpendicular to it, so to speak)? What laws of physics would cause its re-entry into the atmosphere? It is losing altitude but what prevents it from losing altitude gradually and continuously (without a sudden change in its path)? It is already experiencing the gravitational pull of the earth but what is supposed to cause its 'sudden' downfall towards the earth and crashing on the earth?

You are describing something called orbital decay, which is well-understood. Here are the basics, now including more detail:

With increasing height, the earth's atmosphere gradually fades out and becomes vacuum. Objects in low earth orbit will therefore be subject to a tiny amount of frictional braking from the tiny amount of gas molecules they encounter. This makes them slow down a tiny bit in response, and that causes them to settle into an orbit that is a tiny bit closer to the earth.

The closer an orbit is to the earth, the faster the orbiting object has to move to remain in orbit, so as the friction robs the object of kinetic energy it sinks into a lower orbit and speeds up, encounters denser air, more friction, more drag, lower orbit, speeds up, etc., etc.

This process feeds on itself until the object is no longer going fast enough to stay in orbit at all and its path begins to tilt downward as it falls. Friction with the air, and the formation of a super hot shock wave just in front of it, heat it up and it softens, melts, and (usually) disintegrates- and the smallest pieces are burnt up before they make it all the way through the atmosphere. The biggest pieces can sometimes make it all the way down to hit the surface of the earth.

The force of gravity causes it to re-enter the earth since it did not have the essential conditions to be in a orbit, like satellites. In fact, for each orbit with a certain radius ($r$), there is a certain speed ($v$) so that the object remains in the orbit, $$v = \sqrt {\frac{{GM}}{r}}, $$ where $M$ is the earth mass and $G$ is the gravitational constant. See this figure from WikiPedia:

Any deviation from this speed will disrupt the orbital motion and the object will go out of orbit (the object goes into an orbit with a smaller/bigger radius or it could even fall into the Earth or it could even escape from the gravitational influence of Earth). Therefore, there must be a precise balance between velocity and orbital radius. The Chinese rocket did not have such conditions because it was out of control. It has finally fallen to Earth over the Indian Ocean..

When it enters the Earth's atmosphere, the rocket's speed in both horizontal and vertical directions is reduced due to air resistance force (collision with air molecules). On the other hand, due to the gravity of the earth, a downward force is always applied to the rocket. As a result, the rocket's horizontal velocity is constantly decreasing while its vertical (downward) velocity is constantly increasing. In summary:

After entering the Earth's atmosphere:

(The downward direction is considered positive.)

The constant decreasing in horizontal velocity causes the rocket to travel less and less horizontally over time. This means its trajectory becomes more and more vertical. This situation is illustrated in the following figure 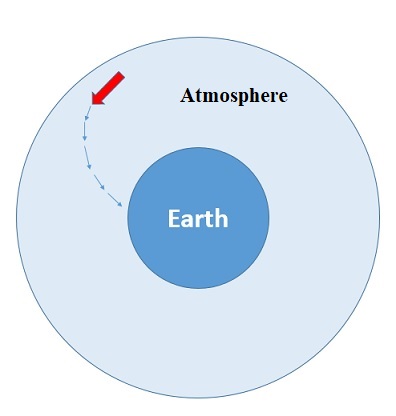 Note that the scales of this painting are not realistic.

Not the answer you're looking for? Browse other questions tagged newtonian-mechanics orbital-motion atmospheric-science drag satellites or ask your own question.

3
Air Drag in orbit
8
Orbital elevators and the Coriolis effect
11
What happens if you slow down a moon?
0
Which force is required by a satellite revolving around the earth?
2
Projectile Path Farther Away From Earth
5
Kinematics and dynamics of a crashing satellite
0
Can applying a downward force on an orbiting object cause a resonance?