Graph profile of the voltage drop vs resistance across a resistor, and the physics behind electric potential difference

I am a student and I have been trying to understand the relationship between voltage drop and resistance, and the underlying physics of Kirchhoff’s voltage law. I am aware of Ohm’s law and I can intuitively understand that, for a fixed voltage supply, if you increase the total resistance of the circuit then the current everywhere drops down. It makes sense to see the flow of electrons as one chain-like flow, so that if something happens in one location of the circuit, the whole chain is affected. And I can interpret voltage as the difference in electric potential, such that when the voltage is not zero between two points, there must be a difference in the electrical potential energy of the charges in the two points, which means that some kind of work was done in between, or the energy of the flow was somehow transformed into heat, for example.

The following is more of a two-parts thought experiment. It’ll be somewhat of a lengthy question as I’ll try to be as clear as possible as to where my confusion lies, so bear with me. If there’s anything that doesn’t make sense or is incorrect in my reasoning or any premises, please do point it out.

Given that conductors and insulators are materials that differ due to their ability to resist current flow, we can say that a conductor is a material with a very low, but finite, resistance and that an insulator is a material with very high, but finite resistance. Say that we have a variable resistor, which resistance we can change from very low to very high, such that we can have it behave as a copper wire all the way to a piece of wood or air.

Now say that we have a 5 V battery, short-circuited by a copper wire of fixed length. The current on the circuit should be at its maximum attainable value now. We choose two locations, A and B, on that wire and measure the voltage drop with a voltmeter, which should give zero. Now we cut out a portion of the wire, from A to B, and replace it with our variable resistor, with its resistance at its minimum (equal to the copper wire): we basically replaced a chunk of wire with something that acts exactly just like it in terms of resistance, so it is still like having a continuous copper wire short-circuiting the battery’s terminals. The current across the circuit is still at its maximum value, since no resistance was added, and the voltmeter still reads zero from A to B. Now let’s say we dial the resistance of our variable resistor up to its maximum value (making it behave like an insulator). The current across the circuit should now be zero, and the voltmeter across A and B should read the same voltage value as the one supplied by the battery, 5 V. If all of this sounds good, then what I am interested in is the graph of the current vs resistance and the graph of the voltmeter value vs resistance. I made some schematics to help understand what I’m trying to say here. 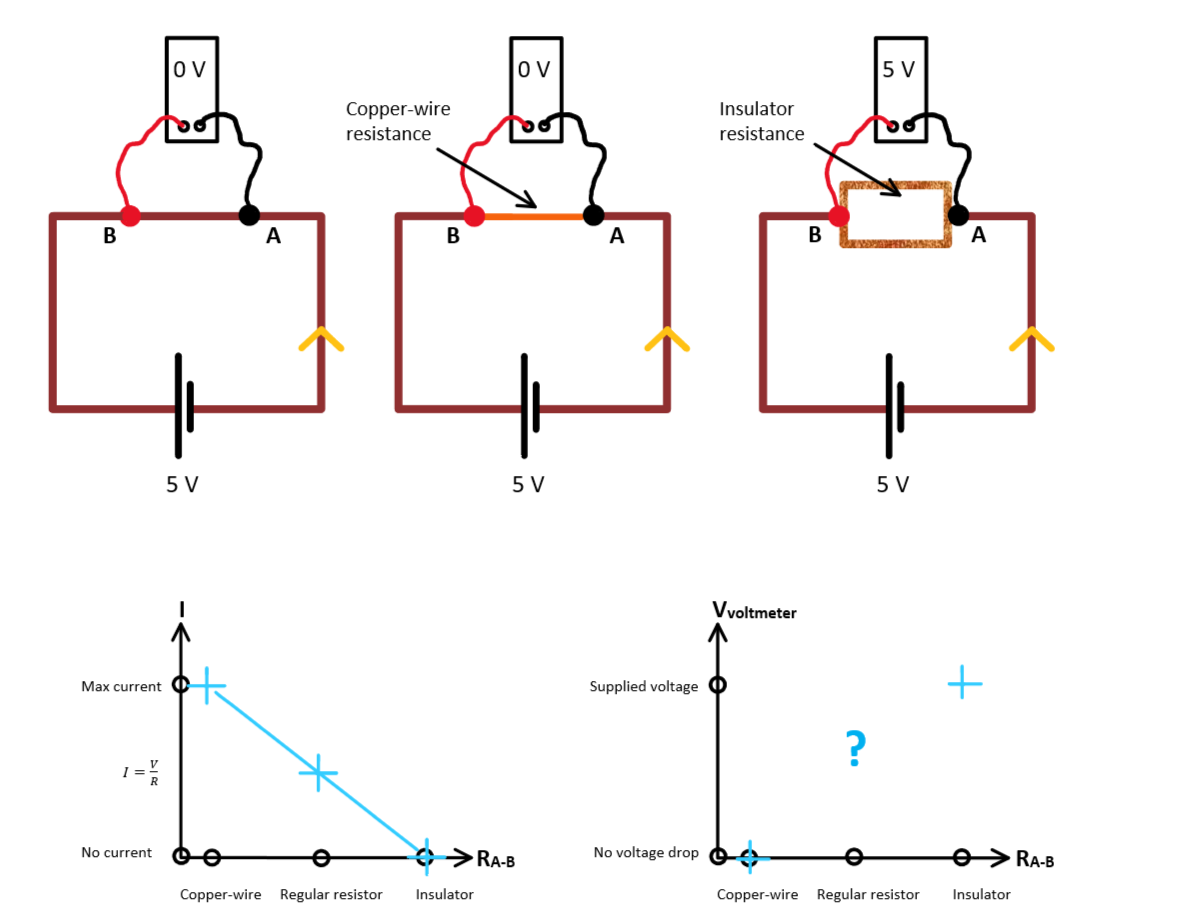 What is confusing me is the profile of the $V_{voltmeter}$ vs $R$ graph. When the resistance is dialled down to “copper-wire” resistance, the voltmeter should read zero. When the resistance is on full “insulator” mode the voltmeter should read the same value of the voltage supplied (5 V): it makes sense to me to now see the wires as “extensions” of the battery’s anode and cathode, as the variable resistor is acting as a sort of capacitor where two conductors (the wires) are separated by something so resistant that acts as an insulator. If all of this sounds good, then what is the profile of the graph in between? I don’t believe it is a straight line, first because circuit current does not remain constant as dial the resistance up, and second, because that would give rise to another issue: somewhere between “copper-wire” and “insulator” resistance you have the value of real resistors, like 100 Ω. If the graph profile were a straight line, linear interpolation would give us a voltmeter reading that’s lower than the voltage supplied 5 V… but wouldn’t this be in discordance with Kirchhoff’s voltage law, which states that voltage drop across our load should be the same as the voltage supplied? Now, the way I see it, even if we say that for that intermediate resistance value of 100 Ω the voltmeter should still read the same value of the voltage supplied, 5 V, which is what we get from $V_{drop}=I R$, as we dial the resistance value down to “copper-wire” value, the voltmeter reading is bound to eventually give us a reading of zero Volts. This means that somewhere in the graph, the voltmeter reading was between zero and 5 V…how can Kirchhoff’s voltage law hold true right there?

The above is very similar to the analogue expression of mass flow rate $\dot{m} = ρVA$. It makes sense to think that this value is the same on locations A and B. Furthermore, the wire’s cross-section before and after the resistor is the same, so $A_{A}=A_{B}$, and therefore:

Now, the fact that the current is the same across the whole circuit makes sense to me. But does the above expression also mean that the drift velocity and charge density stay constant? If they do not stay constant, that would give rise to some sort of difference between the entering and exiting location of the resistor, which would somehow explain the difference in potential energy. After all, if you take a battery there is some difference in charge density between the anode and the cathode that explains the potential difference.

If that is not the case, and indeed $n_{A} = n_{B}$ and $V_{d_{A}}=V_{d_{B}}$, then there must be some other kind of qualitative difference in the charges of location A and B that is justified by the loss of energy due to work done inside the resistor. Maybe, we can consider the following:

So, this means that:

Do correct me if I’m wrong, but it seems that either the electric field or force at location B is weaker than location A. Is this what results from the difference in electric potential?

If that’s not the case, please explain where my reasoning is incorrect, and provide some other alternative observable difference from the charge at B and the charge at A, from which you would infer that there has been work done in between.

Thank you all for the help!

As for your first question, the best way to make sense of what happens is to replace your real copper wires with small resistors and ideal wires. You recognized that the wires have some resistance, so this should not be a large mental leap. To make your scenario make the most sense, we should break it up into 3 resistors. You have the middle one, which is the one you're going to swap out, and then you have one on each side. So we can say that the resistance of the whole circuit is $R_1 + R_2 + R_3$, where $R_2$ is the resistance of the wire you're replacing. Now it's easy to see that $I=\frac{V}{R_1 + R_2 + R_3}$.

With this, we see that $I(r)$ does not have a linear relationship with $r$. The current will follow that curve. You can plot it yourself, but this site offers an example it could look like.

As for your second question (for future reference, SE likes to keep very different questions separate. Ask them separately), what you can tell about that coulomb of charges at A and the coulomb of charges at B is exactly what you can tell about a bag of marbles on the ground, versus said bag of marbles in the air. There's nothing intrinsically different about them, but they do have different extrinsic properties because they are at different locations.

In the case of electrons, the electrons have indeed traveled to a lower potential point in the electric field.

Not the answer you're looking for? Browse other questions tagged electric-circuits electrical-resistance voltage batteries short-circuits or ask your own question.