Flux through a surface as a limit of shrinking volume [closed]

Ask Question
Asked 1 month ago
Active 1 month ago
Viewed 135 times
4
$\begingroup$
Homework-like questions and check-my-work questions are considered off-topic here, particularly when asking about specific computations instead of underlying physics concepts. Homework questions can be on-topic when they are useful to a broader audience. Note that answers to homework questions with complete solutions may be deleted!

Two point charges $q$ and $—q$ are separated by the distance $2L$. Find the flux of the electric field strength vector across a circle of radius $R$.

Now, I don't understand the answer given by the book regarding this question. I mean, suppose instead of a disk, we have a Gaussian cylinder with radius $R$ between both charges. Now, with $2L$ being the length of the cylinder, let both ends length tends to zero, so that in the limit, the cylinder and the disk are the same. Second by Gauss' Law, the flux through a surface that does not cover a charge should be zero, shouldn't it?

But, apparently, the answer is not zero. Why? Where is the error on my thought? 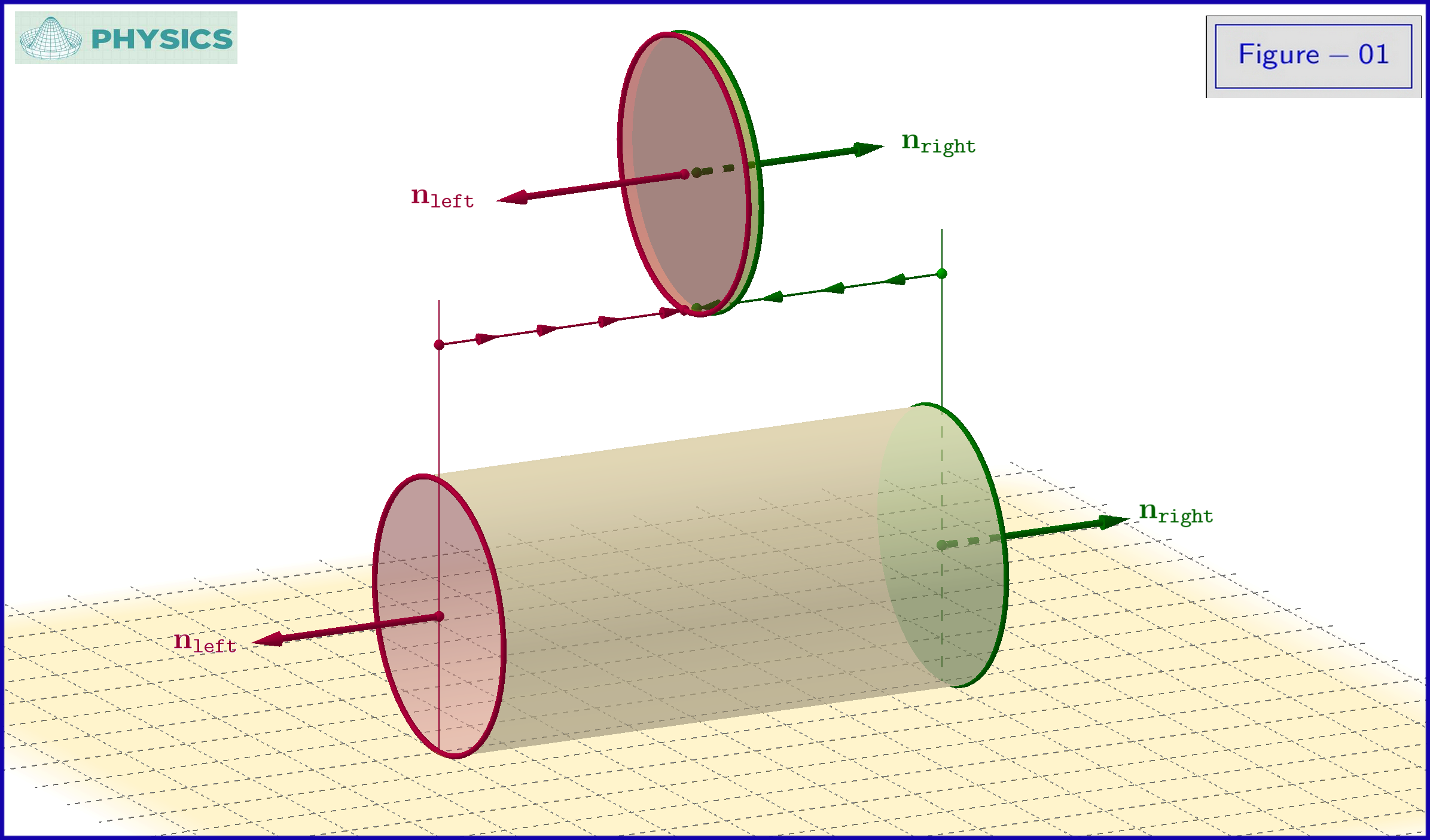 The limit of the cylinder as its length $\,2L\,$ approaches zero is two disks one on the other but with opposite normal orientations $\,\mathbf n_{\texttt{left}}\,$ and $\,\mathbf n_{\texttt{right}}\,$ as shown in above Figure-01. You must choose exclusively one of the normals to have one oriented surface (disk).

A cylinder consists of two disks, with opposite orientation, and a lateral side. By symmetry, the flux through the lateral side is zero. Since the two disks have opposite orientations, again by symmetry, the sum of the flux through them is also zero. This is consistent with what you would expect from Gauss' Law, since the cylinder contains zero charge.

However, what you have here is quite different from a cylinder, since a disk is not a Gaussian surface, meaning that you cannot use Gauss' Law*. Instead you need to calculate the electric field at each point on the disk using Coulomb's Law, and then integrate. If you think about which way the electric field points at each point on the disk, it should become intuitively clear why the flux is non-zero. The key thing that distinguishes this from the cylinder, is that here, you have a single disk, whereas the cylinder has two disks whose flux cancels out because of their opposite orientations.

*In principle, there is a way to indirectly use Gauss' Law by finding the solid angle of the cone with the disk as its base and apex at one of the point charges, and then finding the flux through that solid angle.

I don't really have a very rigorous answer but I think I may be able to say the 'right' way to think about it. The problem is that the shrinking the cylinder action is not really 'continuous' in sense that what happens in the limit is not what happens when you literally drop height $h=0$.

For a concrete example of the above thought, if $f(z)$ denotes the flux through the cylinder as a function of cylinder's height, then:

Not the answer you're looking for? Browse other questions tagged homework-and-exercises electrostatics electric-fields charge gauss-law or ask your own question.

1
Electric field around charged cylinder
3
Flux through a conduting cylinder?
0
What is meant by “net charge”?
3
Does changing a closed surface in the manner outlined contradict Gauss' Law?
8
Why is the electric field due to a charged infinite cylinder identical to that produced by an infinite line of charge?
0
Why do outside charges not contribute to net flux through a surface, pt 2
1
Distribution of charges on the surface of a charged conductor
0
Gauss Law to Find Electrical Field on central axis from Disk of Uniform Charge Density
0
Why uniformity of $E$ is assumed inside the imagined cylinder while deriving $E$ of an infinitely large charged plate using Gauss' law?