So how would we know whether a force truly exists or not. I can be accelerating a car my 5 meters per second squared but another car accelerating with the same acceleration would think that my car is at rest relative to them. So is there any force on the car? Or are forces just relative and their existence just depends on our reference frame?

Within different inertial frames, velocities will be different. However, acceleration will always be the same in any inertial frame. Therefore, so will the forces.

People in an accelerated car know that it is accelerating due to inertial forces that can be observed inside.

In cases like that, besides the inertial forces, there is the reference of the fixed environement, so it is easy for the passengers to know about their acceleration, just looking outside.

More interesting is the case of the Earth. It was not so obvious to decide if all the sky rotates around us, or if we are rotating and the stars can be considered a fixed environment. Here, inertial forces like Coriolis, that explain trade winds and hurricanes rotation are a proof that we are rotating, what means an accelerating frame.

That is not true.

When we consider just velocity, it’s simple because there are no forces involved.

But in accelerated motion we have to consider pseudo forces. You both are being pushed in this case, due to the pseudo force. That force is same for both of you, but that doesn’t mean you won’t notice a force on the other.

Say, you and your friend are moving in your cars with same acceleration. But your friend has a pendulum in his car that is hanging. Due to pseudo force, the pendulum is pushed back, and it stays like that because of the constant force on it backwards. 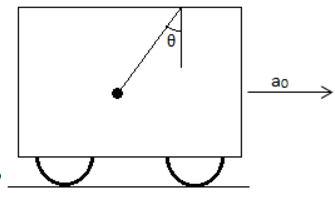 You look over, and notice that pendulum is acting weird. That’s how you prove, that even though both are experiencing same forces, they don’t cancel out. Instead both experience it.

In Galilean relativity, physics is unchanged for frames that are related to uniform boost. That is, we introduce an equivalence relation $\sim$ among frames and define $\mathcal{A} \sim \mathcal{B}$ if frame $\mathcal{B}$ moves with constant velocity vector as seen by the frame $\mathcal{A}$. Then Newton's first law says that there exists a particular equivalence class such that inertial motion appears as uniform linear motion. Then there comes the second law.

In fact, we can think in this way: $\vec{a}$ is Galilean invariant, and $\vec{F}=m\vec{a}$ is the simplest physical law that conforms with Galilean relativity! And this is because force, a physical quantity, should not depend on observers. Indeed, "(Physical quantity)$ = $(Geometrical invariant)" is a recurring leitmotif throughout the history of physics.

Or are forces just relative and their existence just depends on our reference frame?

Forces are only relative insofar as "every action has an equal and opposite reaction". So a force applied to the car must also equally-and-oppositely be applied to something else, in this case the road surface.

For the other car, then, it must also be applying some amount of force to the road surface which results in the same acceleration. (Note that the forces to achieve that acceleration won't be the same unless the masses of the two cars are the same, because of "F = ma".)

The fact that there is no net acceleration between the cars is irrelevant, because each car's forces are relative to the individual cars and the road surface.

To understand the answer, you need the concept of an inertial or non-inertial frame. That's fundamental to this kind of question.

Basic Newtonian mechanics are applicable in an inertial frame - one where the "space" (or box, or region) that we consider, is itself not accelerating. Since movement in a circle is also acceleration, that means the frame itself is not moving at constant velocity in a curve either.

So the answer to your question is this:

Because a different, but constant, velocity of the frame don't change the frames inertial nature or the pseudo-forces in it, you can't tell as an observer in the frame what velocity the frame moves at. In a car with blinds over the windows, you couldn't tell the difference between stationary, or moving in a straight line slowly, or quickly. It will all feel the same,and a pendulum will hang the same in each case.

I think it depends on what you mean by "force is relative." Do you mean that the observed force on an object is different in different frames of references?

Then yeah, force is relative. If you are sitting in your car, and the car is accelerating. You feel/observe the inertial force (kinda like gravity) backwards. But in the ground's frame of reference, you are not acted upon by any backward force.

However, acceleration, unlike velocity, doesn't satisfy the principle of relativity. That is for different inertial frames of different velocities, the physics in all of them are exactly the same. You can not measure an absolute velocity for an inertial frame by performing any kind of experiment.

However, acceleration doesn't have principle of relativity. You can know your absolute acceleration by observing your acceleration/inertial force in a non-inertial frame.

Not the answer you're looking for? Browse other questions tagged newtonian-mechanics forces acceleration velocity or ask your own question.