How to calculate the voltage across a resistor using assumed states method? [closed]

Ask Question
Asked 3 days ago
Active 2 days ago
Viewed 39 times
2
$\begingroup$
Homework-like questions and check-my-work questions are considered off-topic here, particularly when asking about specific computations instead of underlying physics concepts. Homework questions can be on-topic when they are useful to a broader audience. Note that answers to homework questions with complete solutions may be deleted! 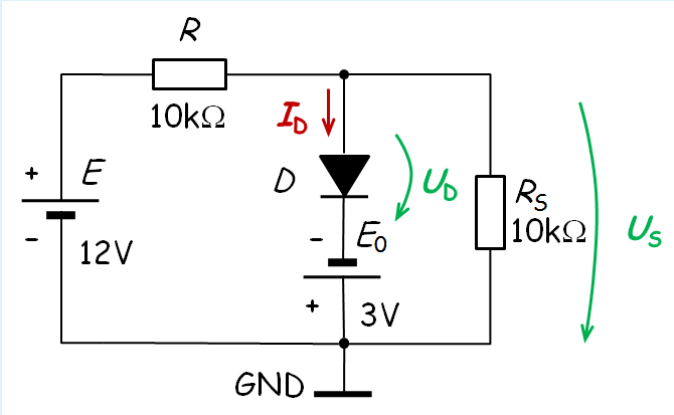 I've assumed that the diode is OFF and replaced it with an open circuit. The conditions are: $U_D > 0, I_D = 0$. I think I should be applying KVL now to find the voltage, but I'm not sure how. Also, I've also taken into consideration using Thevenin's Theorem, but I get stuck at a point where I need to find $I_D$ in order to calculate $U_S$. However, I think the assumed states method is better in this case. Could you give me an idea on how to continue this?

Andrei0408Andrei0408
3344 bronze badges
New contributor
Andrei0408 is a new contributor to this site. Take care in asking for clarification, commenting, and answering. Check out our Code of Conduct.
$\endgroup$
Add a comment  |

First note that if you're using the German (or East European) convention for the voltage polarity, the diode is ON when $U_D\ge 0$ and OFF when $U_D < 0$.

Now you can go on, knowing that the diode in the ON state behaves as a short circuit.

The picture below shows three different common ways of denoting the polarity of a voltage, with an indication of some example countries in which are frequently used (no pretense of being general or exhaustive, and variations are possible):

When reading circuits, it is important to properly interpret the conventions used to denote polarities.

Not the answer you're looking for? Browse other questions tagged homework-and-exercises electric-circuits electrical-resistance voltage batteries or ask your own question.