Can we modify classical total energy equation to get desired results (Schwarzschild metric results) for planetary orbits in a Lagrangian analysis?

We can also write the potential energy in kinetic energy form by introducing an additional coordinate u to write the four-dimensional total energy equation. It has to be presumed that all the four coordinates satisfies the basis vector symmetry, which is the requirement of the Lagrangian analysis.

As the classical potential is written in kinetic energy form and the total energy equation is four-dimensional with only kinetic energy terms, the resultant system force is zero (eq. (3) in image). But, both the eq. (1) and (3) give same results for force on the individual mass.

We can modify the total energy equation to get same results for the planetary orbits as the Schwarzschild metric results in geodesic analysis. Mathematical analysis of the classical Lagrangian approach and the GR approach is very similar, but physical interpretations are different. Only for the limited purpose of obtaining same planetary orbits, we can establish correspondence between the two approaches as:

The question is: This classical Lagrangian analysis with the modified energies, is mathematically similar to the geodesic equations analysis for the four-dimensional curved space Schwarzschild metric. The results for planetary orbits are same. Then, does it mean that, we need a modified expression of the kinetic energy for a mass in motion under gravity? 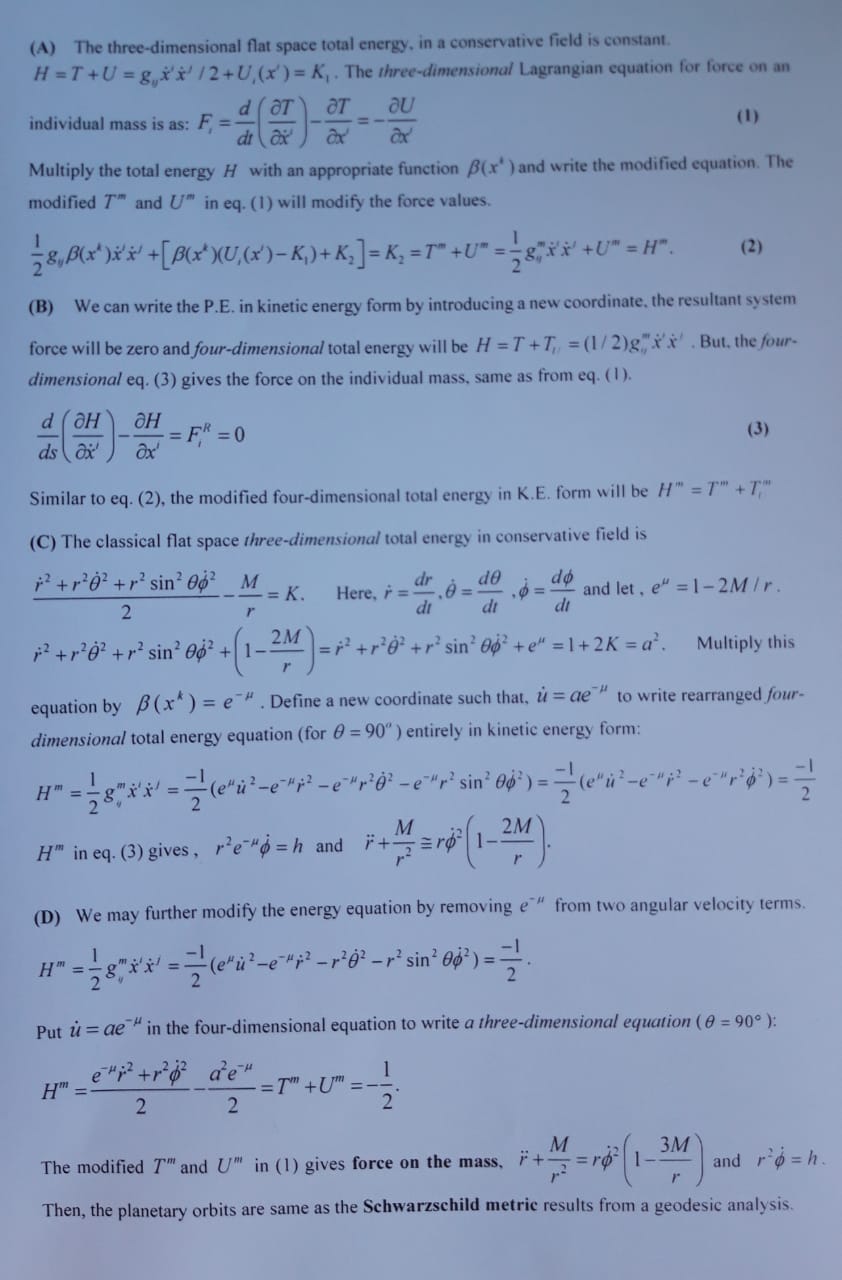 "... does it mean that, we need a modified expression of the kinetic energy for a mass in motion under gravity?"

The answer is: no, or else I am not sure what you meant to ask. The two methods of calculation agree and both are correct. So clearly nothing needs to be modified.

Not the answer you're looking for? Browse other questions tagged general-relativity classical-mechanics lagrangian-formalism metric-tensor geodesics or ask your own question.

16
Geodesic Equation from variation: Is the squared lagrangian equivalent?

1
Why does $\frac{d\tau}{d\sigma} = L$?
0
Metric in Lagrangian and the minimum total potential energy principle
2
In classical mechanics, can the Lagrangian be thought of as a metric?
0
How to compare the observation with the theoretically predicted result?
1
Geodesic equations in Schwarzschild geometry
1
How can I interpret the equation of the orbit in Schwarzschild metric?
0
Is it incorrect to assume the Christoffel symbol symmetry (with respect to the lower indices) for a curved space-time?
1
Doubt regarding equation for orbits of particles in Schwarzschild geometry