My question : What does it mean when we arrive at negative values for distance variables like $\rho$ in cylindrical coordinates? (after some discussion here,I revised the question, at the end of the post)

here $u$ represents a coordinate variable and may be $r$ , $\rho$ in cylindrical coordinates or $x , y ,z$ in Cartesian coordinates.

The problems is that , this equation has an oscillatory behavior and it's solution has negative values too. What is the meaning of negative $\rho$ in cylindrical coordinates? 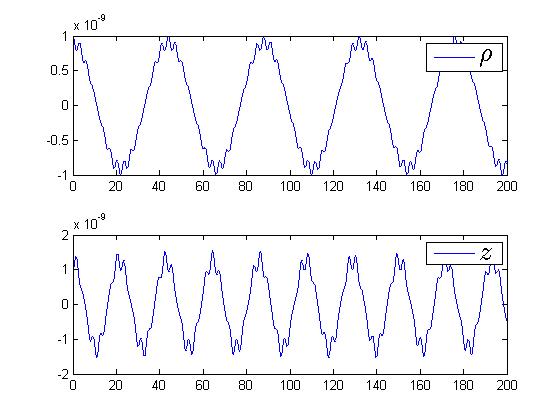 EDIT 1: after some answers posted , I found out that the problem has something to do with our derivation of equations.Here is how correct equations are.

Now , the problem is : how can we arrive at those equations (mathieu equation, above)(in the literature on Paul traps they use this equations) from these equations of motion ; eliminate $\theta$ dependance and instead of that let $r$ get negative values and interpret it as a positive $r$ with $\theta_0+\pi$?

Consider an equation that you have written in Cartesian coordinates $x,y,z$ which gives you these coordinates as a function of time or something like that. Then you want to write it in, say, cylidrical coordinates. Then you write something like: $$ x=r\cos\phi\\ y=r\sin\phi\\ z=z $$ and plug it into your equation. Now just forget the word coordinates. It is just a mathematical transformation. Then you arrive at some equation for $r,\phi,z$, and you solve it. Then you can use the above formulae to reconstruct the original $x,y,z$ variables. This means that when $\phi$ is, say, $3.2\pi$, it means the same as $1.2\pi$ (check the eqns) and when $r=-|r|$ it means the same as $r=|r|$, while $\phi$ is shifted by $\pi$. Or any other explanation you prefer. The point is that you just have to plug it into the transformation given above.

The confusion stems from the fact that you are used to think about $r,\phi,z$ as coordinates, which is different from an arbitrary change of variables. Coordinates have to be in 1 to 1 correspondence with the space points. This is why you say $r\ge 0,\phi\in[0,2\pi)$ and some subtleties with $r=0$. When you are trying to solve an equation, this is completely unnecessary.

In fact, when you try to think about these new variables as of coordinates, you can note that $r$ should never pass to negative values -- instead, $\phi$ should jump (while you are, at the moment, thinking that it is constant). So, $\phi$ is not constant, and in this interpretation your equations are wrong (because $\phi$ jumps occasionally). In order to stick to the 'coordinates' interpretation, you have to modify the equations, they will be different, and the new equation will have non-negative $r$ and nonconstant $\phi$ as the solutions. This is a way too complicated, so it is easier to think about $r,\phi,z$ as of a convenient mathematical substituiton and not bother about any restrictions on the range. You only have to remember the formulae that link you to the original problem.

You have to be careful when you derive your equations of motion in cylindrical versus cartesian coordinates. For example, if your Hamiltonian (I'm ignoring the $z$ direction because it is the same in cylindrical to cartesian) is

then in cylindrical coordinates you get

That $\sim 1/r^2$ term represents a repulsive term which prevents $r$ from getting negative, physically. If your equations of motion are derived physically, getting a negative radius should be impossible.

Not the answer you're looking for? Browse other questions tagged coordinate-systems or ask your own question.