No solution to Bragg's law?

Bragg's Law provides a description for the diffraction peaks we observe when x-rays are incident on a crystal structure. We observe these diffraction peaks because the wavelength of the incident x-rays ($\lambda_{x}$) is comparable to the spacing between the atoms in the crystal ($d_\mathrm{atomic}$).

This criterion is not met when visible light is incident on a crystal (here $\lambda_\mathrm{visible}\gg d_\mathrm{atomic}$) and hence if I shine a laser (with wavelength in the visible) on a smooth crystal (so that specular reflection occurs), I observe the usual law of reflection (that is, I observe that the angle of incidence($\theta_{i}$) always equals the angle of reflection ($\theta_{r}$)) as well as Snell's law. But now if I fire monochromatic x-rays at the same crystal (where $\lambda_{x}\approx d_\mathrm{atomic}$) according to Braggs law ($n\lambda = 2d\sin(\theta)$) I will only observe reflection when the x-rays are incident at particular angles.

But as soon as $\lambda_x>2d$, then there are no solutions to Bragg's law. But what does this actually imply in terms of behaviour? The moment we get that $\lambda_x>2d$, do the usual laws of reflection and Snell's law begin to apply and hence should we expect to suddenly observe reflections at all angles of incidence? Or rather are there now no angles at which reflection will occur? If this is the case, are there any laws that describe this behavior and at what point can we expect for the standard laws of optics to begin to apply? That is, what must the ratio $\lambda_x/d_\mathrm{atomic}$ be for reflection to begin occurring at all angles again?

Reflection always happens, regardless of the angle and the wavelength.

In addition to that zero-order beam, if the wavelength is short enough, you can get additional side peaks (sometimes a few, sometimes many), which are formed by constructive interference in the places where the scattering between neighbouring planes in the crystal lattice has a path difference of some integer multiple of the wavelength of the light. These diffracted beams occur on either side of the zero-order Snell-like reflected beam, and their angle of emission will shift if you shift the angle of incidence.

In reflection geometry, these additional peaks follow Bragg's law in the form $$ d\sin(\theta_\mathrm{i}) = d\sin(\theta_{\mathrm{d},n})+n\lambda, \tag{$*$} $$ where $d$ is the interatomic spacing at the surface, $\theta_\mathrm{i}$ is the incidence angle and $\theta_{\mathrm{d},n}$ is the diffraction angle (both measured from the surface normal), and $n$ is the order of the diffraction (which can be positive, negative, or zero). This corresponds to the following geometry

and it imposes the requirement that the red and the blue lengths differ by an integer number of wavelengths. It's important to note that this is different from the usual geometry drawn in textbooks, where the constructive interference comes from various planes inside the material $-$ here the constructive interference comes from scattering at the different atoms at the surface (though also deeper inside) with the crystal spacing between them parallel to the surface itself.

The form $(*)$ of Bragg's law in reflection geometry implies that: 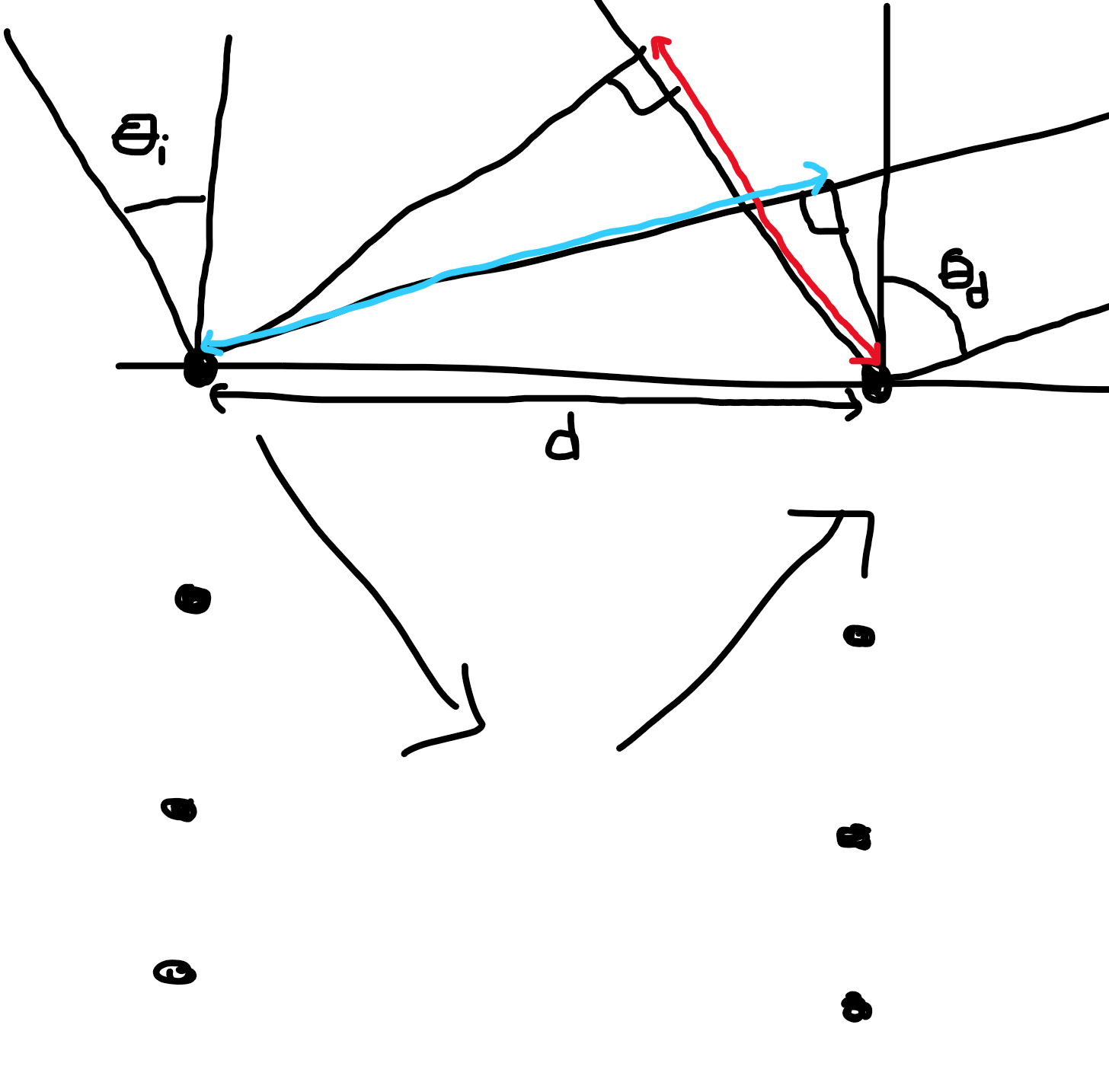 However, there is an additional effect that comes in when you consider the reflections deeper into the crystal: in addition to the transverse interference I described above, you can also have constructive (or destructive) interference between waves that scatter at different crystal planes at different depths.

Here things get a bit more tricky in that this interference can affect the intensity of the reflected and diffracted beams, and it can potentially reduce them substantially. And, of course, it can also add new types of diffracted beams. However, to describe those things effectively, you really need to develop the full-blown theory of scattering from a periodic 3D lattice; this is explained in depth in any reasonable condensed-matter textbook.

The upshot is that it is perfectly possible to have certain combinations of incident angle and wavelength where the Snell-like zero-order reflected beam is much stronger, as well as where it is substantially or even totally suppressed, coming from the interference of reflections off of the various sub-surface crystal planes.

And here it is important to note that the same thing can happen with visible light, as well, though there you need the periodic structures to be suitably larger. This is known as a Bragg mirror, and it typically consists of a series of layers of dielectric material with thickness in the hundreds of nanometers, and then the interference between the scattering at each layer can eliminate reflections (as with antireflective coatings) or massively reinforce them (so you can get reflectivities approaching 100% using successive layers of transparent glass).

Not the answer you're looking for? Browse other questions tagged optics solid-state-physics crystals x-ray-crystallography braggs-law or ask your own question.