Or should it be the other way around, because hotter water evaporates easier than cold water?

I know this sounds stupid, so just hear me out.

I use an evaporative cooler and add normal room temperature water. Someone told me to add cold water from the refrigerator to get better results. I intuitively thought that indeed cold water will produce colder air.

But as we all know evaporative coolers cool air by using the air to evaporate water which takes away heat from the air. So, we need the water to evaporate to cool the air. But we know that hotter water evaporates easier than cold water.

So, should it not be the case that refrigerated water will actually not evaporate as efficiently and hence not produce cooler air than in case of room temperature water ?

For what it's worth, I tried both and could not feel any noticeable difference, but of course, it was nowhere close to a controlled experiment. So, I would appreciate an answer about what does physics predict what would happen?

Per unit time, the speed of evaporation will be (slightly) less. As you mention, the warmer water will vaporize more rapidly.

Neither of these effects are large. The total budget is dominated by the vaporization. A 15 degree C difference in the water will be hard to notice.

You've intuited two possibly relevant counteracting mechanism (of which none, one, or both might be negligible): colder water takes more energy to heat up, and colder water evaporates slower.

As a first stab at the problem, let's assume that the water evaporates at its well-defined supply temperature and that the rate of water evaporation is essentially the same at both temperatures. This is a good approximation if the water evaporates quickly under forced convection of hot, dry air—a pretty good description of a swamp cooler fed from a (room-temperature or cold) water flow. Here, the difference in water chemical potential (essentially, the concentration) between the liquid water and dry air in conjunction with a very high relative surface area drives rapid evaporation, and the water temperature doesn't have time to equilibrate at room temperature.

The enthalpy of vaporization (also called the heat of vaporization) reflects the amount of "heat" needed to achieve evaporation, corresponding to the cooling effect applied to the surroundings. The amount reflects evaporation/vaporization at the given temperature, from liquid water to gaseous water. It does not require boiling. 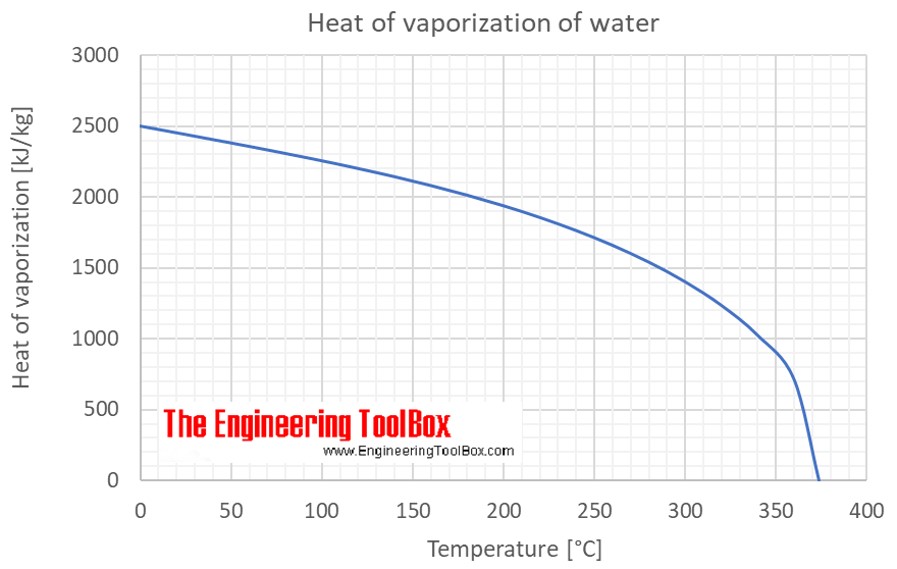 Alternatively, it may be the case that you're providing a large tub of water that evaporates slowly. Note that water away from room temperature will tend to equilibrate toward room temperature, minimizing the influence of the original temperature (while also providing a separate mechanism of cooling). This would also contribute to the difference for different temperatures being imperceptible. In any case, the coupled heat–mass transfer problem becomes more complex, as you may need to consider the exposed area, temperature distribution inside the water container, and boundary conditions that mediate the heat and mass transfer. (In other words, the kinetic process of evaporation depends on more parameters than the thermodynamic energy balance.) Do you have this information? You may wish to migrate to the Engineering Stack Exchange site, which might be more useful in terms of, say, providing recommendations from manufacturers, who have studied this problem in detail.

Not the answer you're looking for? Browse other questions tagged thermodynamics temperature thermal-conductivity evaporation or ask your own question.

3
Hygiene thermodynamics 2
3
Would a Cup of Tea Be Hotter If you Add the Milk Before or After Boiling Water?
1
Auto-refrigeration
5
Does the temperature of water determine how much heat will be removed from air used to evaporate it?
58
Why does cold metal seem colder than cold air?
2
Does a cooler, submerged in water, keep beer colder, longer?
3
Why does water get significantly colder while falling through the air?
2
Liquid vs. gas cooling
0
How does an ultrasonic humidifier / atomizer affect temperature?
27
Can a fan cause a liquid to cool below room temperature?